"We cannot let these victims down!," Martin Galvin said after the AOH's webinar 'Make Britain Keep Promise of Legacy Justice.' 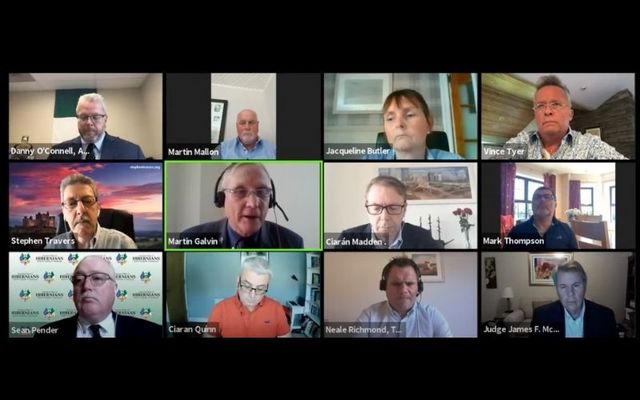 Congressman Brendan Boyle, Irish Consul General Ciaran Madden, and representatives of Irish and British political parties joined with Irish Americans across the US last Saturday at a webinar hosted by the Ancient Order of Hibernians (AOH) to hear victims’ relatives and survivors appeal for help to stop Britain from taking away their rights to legacy justice.

Jacqueline Butler, daughter of a Springhill Massacre victim; Steven Travers, a survivor of the Miami Showband Massacre; and Martin Mallon, whose aunt Roseann Mallon was one of 17 collusion murder victims killed with the same weapons, each described how the new British legacy plans would remove their legal path to truth.

The moving appeal was answered with pledges by participants to help make Britain keep the promise of legacy justice.

Martin Galvin, the AOH’s Freedom for All-Ireland chairman said in a statement, “The new British proposals, titled ‘Addressing the Legacy of Northern Ireland’s Past,’ were described as a plan to bury Britain’s legacy in the North’s conflict. Britain will enact an amnesty dressed up as a statute of limitations so that no one could be prosecuted for murders during The Troubles.

"While ostensibly applying to all killings, the real beneficiary would be members of the British Army and Royal Ulster Constabulary, who never faced charges for murders like those in Ballymurphy or collusion killings.

“During The Troubles, crown forces and non-jury Diplock Courts had no hesitancy in jailing Republicans, while only a literal handful of British troopers were jailed for conflict killings.

“Britain will also use the statute of limitations gimmick to take away legal rights to inquests and civil actions, to prevent more proceedings, like the Ballymurphy inquest, from revealing more embarrassing truth about British crown killings.

“Britain wants to remove the Historical Investigations Unit (HIU) from its Stormont House legacy mechanisms, agreed with the Irish government in December 2014. An HIU conducting genuine investigations of all controversial killings is viewed by nationalists as the key component of Stormont House, which could give them truth in hundreds of other crown force or collusion killings.

“Instead of an HIU, the British would create an Information Recovery Body, citing the Truth and Reconciliation Commission in South Africa as a case study. South Africa required state force killers to reveal the truth as a condition of getting an amnesty. The British are giving amnesty in advance so that no one would have any incentive to come forward."

Galvin continued, "Three victims and survivors then described what was at stake. Jacqueline Butler, the daughter of Paul Butler, spoke about the Springhill-Westrock Massacre and her 49 year battle for truth. On July 9, 1972, British snipers, following a ceasefire and formal peace talks with Republicans, murdered five people including Catholic priest Father Noel Fitzpatrick, Paul Butler, Margaret Gargan, 13, John Dougal, 16, and David McCafferty, 16, in the Springhill-Westrock Massacre.

“After one of the teenagers was shot, Father Fitzpatrick asked her father Paul Butler to help him locate the wounded victim. Father Fitzpatrick held up a white handkerchief. British troopers then shot her father and the priest. A teenage boy ran to help them and was also killed, while Margaret Gargan was shot while running for cover.

“The papers claimed that all five were gunmen wearing black. For years afterwards, British regiments repeatedly searched the family home and harassed the widowed mother.

“She said, ‘All we want is for the British to admit what they did.’ Her father’s inquest is scheduled for next year but now she finds it may never take place.

“Stephen Travers said the British government is trying to take away all hope of justice. He was a member of the Miami Showband returning from a performance when they were flagged by what seemed a routine British UDR checkpoint near Newry. They were ordered to stand by the road with their hands on their heads, while the uniformed men checked their van.

“Two members of Britain’s Ulster Defense Regiment were planting a bomb under the driver’s seat when it exploded, killing both of them. The others opened fire, killing bandsmen Fran O’Toole, Brian McCoy, and Tony Geraghty. Stephen Travers was wounded and left for dead.

“The killers were connected to the Glenanne gang which killed 120 people and carried out the Dublin-Monaghan bombings. He is now suing the British Ministry of Defense and Constabulary Chief Constable because of proven British state involvement.

“Martin Mallon, an ex-prisoner and well-known Republican in East Tyrone, described how his aunt Roseanne Mallon, 76, was murdered and his mother wounded, shot by loyalists using the same weapons used in 17 collusion murders over a six-year period, including American citizen Liam Ryan. British troopers were posted nearby and ordered not to intervene. He has been fighting to get a legacy investigation into the links between all of these killings would be expected to prove crown collusion.”

Galvin said Boyle “pledged his support and admiration for the victims who have suffered so much and never lose hope. The British government does care about the United States. He said this is a dangerous step where Britain rips up agreements that go back more than 20 years over the years.

“’As a member of the House Ways and Means Committee, I will not be interested in any free trade agreement if the British continue to make agreements and violate them,’” Boyle said.

Galvin added, “For decades the British had a policy of deny, delay, and die. They denied the truth about crown force or collusion murders, until the truth was undeniable. They delayed any legal way of getting the truth, until no more delays were possible. They hoped that relatives and witnesses would die, and those remaining would lose interest. Since this strategy did not work in Ballymurphy, they want to shut down any legal means of getting justice.

“These proposals have been rejected by the Irish government, northern political parties, Catholic Church, and relatives’ groups. Britain does not seem to care. Britain cares about America. We cannot let these victims down!”