Martin Galvin of The Ancient Order of Hibernians (AOH) says Trevor Ringland's appointment as Special Envoy "is a challenge and opportunity for Irish America." 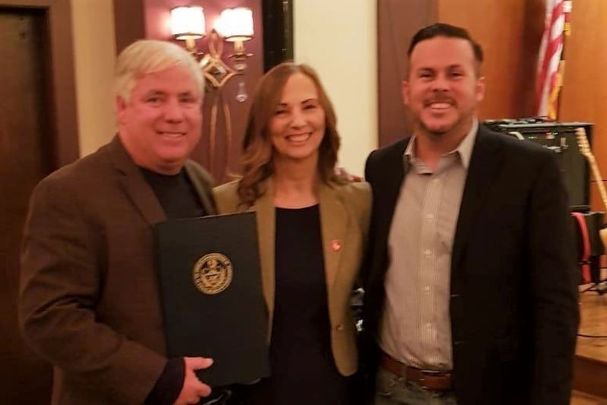 The appointment of Trevor Ringland as Northern Ireland’s special envoy to the U.S. has been questioned by the Ancient Order of Hibernians (AOH), which issued a statement via its National Freedom for All Ireland chairman Martin Galvin.

“The appointment has heightened concerns that the British government plans to renege on the Stormont House Agreement and shut the door on legacy justice for those killed during the Troubles," Galvin said in the statement.

"Mr. Ringland has been advocating this approach in a letter-writing campaign for more than a decade, and now describes his role to the Belfast daily paper the News Letter as ‘challenging’ the strong Irish American lobby, and what he regards as Irish America’s ‘simplistic views’ on the North.

“The job was created for Mr. Ringland, less than one month following the Ballymurphy Massacre inquest verdict and United States Senate passage of a bipartisan Resolution backing the Stormont House Agreement and action to resolve the injustices of state-sponsored violence.

“Trevor Ringland, solicitor, former chair of the Conservative Party in the north and international rugby player, has established himself as a vocal opponent of any investigations of British crown forces. In his first interview after his appointment, given to the Belfast News Letter, Ringland attacked Pennsylvania State Representative Kevin Boyle (whose brother Brendan Boyle is a member of Congress) for saying, ‘The British government through its intelligence, army, and police, ran the UDA and UVF in the north of Ireland but still want to hide that fact.’

“There is substantial evidence to support Boyle’s statement in the de Silva report commissioned by former British Prime Minister David Cameron on the death of Pat Finucane and a host of investigative reports on collusion. Ringland’s refutation is, ‘My father was a policeman. My grandfather was a policeman. There’s no day my father went out to kill anybody.’”

Galvin added, “Without casting any aspersions on Mr. Ringland’s family members, nationalists are unlikely to be convinced that because Mr. Ringland’s father may not have been engaged in collusion, that therefore no members of the RUC OR British military were guilty of collusion.

“For hundreds of families who saw loved ones murdered by British crown forces or loyalist agents, their loss was compounded by the belief that the British state was complicit in the murder of their loved ones. The Good Friday Agreement promised them a chance for justice. Families then found the British government was blocking their hopes for truth.

“The AOH and other Irish American organizations have been supporting these campaigns for legacy justice, organizing American tours, and bringing them to Congress.

“Sixteen years after the Good Friday Agreement, the British and Irish governments entered the Stormont House Agreement in December 2014, offering bereaved families hope for legacy justice. They agreed four new legacy bodies among them a Historical Investigations Unit which could investigate controversial conflict killings including those by British forces or collusion killings. It also proposed an Independent Commission on Information Retrieval, an Oral History Archive, and an Implementation and Reconciliation Group.

“Instead of a Historical Investigations Unit investigating hundreds of controversial killings, including British crown force and collusion killings, Britain proposed a review by their appointed ‘independent body.’ This panel would close all cases unless they saw ‘new compelling evidence and a realistic prospect of a prosecution.’ They would hold no investigation to look for new evidence, before ruling there was none.

“The Irish government, four Catholic bishops, legal experts, and justice campaigners slammed British plans on crown legacy killings, accusing Britain of ‘bad faith’ and ‘rewriting the rules of justice.’ The British government has come under increasing pressure to allow investigations into these killings.

“The British government has already announced plans to avoid such revelations in the future. They want an amnesty for British troops and to break its Stormont House Agreement pledge of a Historical Investigations Unit. Mr. Ringland is expected to serve as an apologist for the new legacy measures.”

Galvin concluded, “Mr. Ringland’s appointment is a challenge and opportunity for Irish America. The AOH supports the hundreds of victims’ families who have been fighting for justice for murdered loved ones for decades. We are confident that if Americans hear the facts, they will understand why Britain fears legitimate investigations into crown force or collusion killings.

"Mr. Ringland’s visits will be opportunities for Irish Americans to present the facts.”