Nearly 50 years after their deaths, ten victims of the 1971 Ballymurphy Massacre have been declared "entirely innocent of any wrongdoings" by a coroner in Belfast. 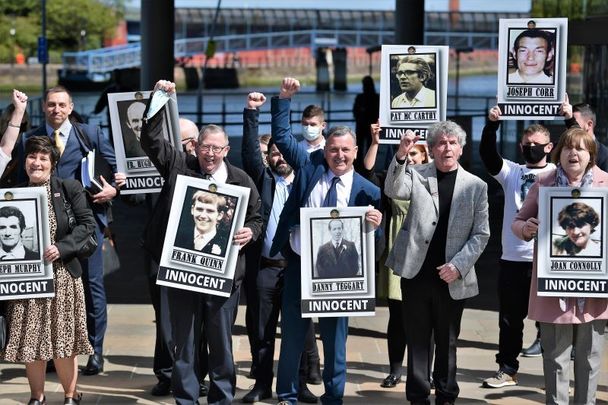 May 11, 2021: Relatives react after the findings of the Ballymurphy Inquest were released by the coroner at the Waterfront Hall in Belfast, Northern Ireland. Getty Images

10 victims of the 1971 Ballymurphy Massacre in West Belfast were today found to be “entirely innocent."

The families of ten victims of the 1971 Ballymurphy Massacre in West Belfast have welcomed the findings delivered today, May 11, by coroner Justice Siobhan Keegan.

Throughout the inquest that began in November 2018, Justice Keegan considered five incidents that occurred between August 9 and 11 in 1971 during the Troubles. Not included was the death of Paddy McCarthy (44), who died of a heart attack shortly after a confrontation with a group of soldiers on August 11.

The deaths occurred as part of the British Army's Operation Demetrius, which saw the arrest and internment without trial of hundreds of people in Northern Ireland suspected of being involved with the Irish Republican Army (IRA).

Keegan said the 10 victims "were entirely innocent of any wrongdoings on the day in question." While she attributed nine of the 10 shootings to the British Army, she could not definitively conclude who shot victim John McKerr.

Justice Keegan’s findings in relation to the Ballymuprhy Massacre deaths:

"The Coroner found that Father Mullan was unarmed, he was not acting in any way as a threat; he was attending to a wounded man in a field and waving a white object as a sign of his peaceful intentions. The Coroner was convinced that he was a peacemaker. He had made representations to the Army earlier about the issues that were pertaining in the community."

"The Coroner found that Mr. Quinn was unarmed and was not acting in any way as a threat."

"The inquest had heard no convincing evidence, either on paper or orally, to justify the shooting of the deceased. The Coroner found that there was a violation of Article 2 ECHR given the manner in which the shooting occurred without minimisation of risk."

"The four deceased were unarmed and were not acting in any way of threat. No arms were found on or near the deceased and there was no evidence of gunshot residue that satisfied evidential standards. None of the deceased were claimed as members of the IRA, none had military trappings at their funerals and their death notices highlighted no association."

"There was, however, no justification provided by the Army for the shootings of the
four deceased"

"The use of force by the Army was clearly disproportionate ..."

"There was no adequate investigation by the Royal Military Police. The Coroner
found that both men were shot in the back when either crouching, crawling or prone. There was no evidence that the deceased were armed or acting in a manner that could be perceived as posing a threat."

"No valid justification had been provided for soldiers opening fire."

"Mr. McKerr was clearly unarmed and he was not doing anything that could have caused someone to think him a threat or that justified the use of lethal force against him. He was an entirely innocent man who was indiscriminately shot on the street."

Mary Kate Quinn, the niece of John Laverty, who attended the hearing in Belfast today, shared this simple yet striking picture after the findings were announced:

David Voyle, whose grandmother Joan Connolly was amongst the Ballymurphy Massacre victims, shared this tweet, and later thanked all the supporters:

The Relatives for Justice group, "an Irish-based human rights NGO providing holistic support services to the bereaved and injured of the conflict," highlighted the key findings which "vindicated" the victims' families in a statement.

Today's verdict in the Ballymurphy Massacre inquest demonstrates there have never been effective investigations into state killings. And tells us why we must have independent investigations - not amnesty!

The Pat Finucane Center, representatives of which attended all of the proceedings, said in a statement: "What happened today shows the potential of the inquest system to assist bereaved families and communities in their long and continuing journey towards, hopefully, freeing themselves from the chains of the past."