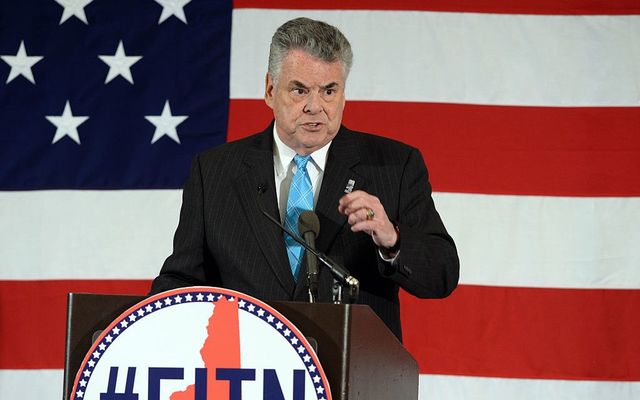 The three representatives acted after meeting Carmel Quinn during her multi-state American tour representing the Ballymurphy Campaign and Relatives for Justice.

According to a press release from the Ancient Order of Hibernians, the letter is the latest sign of growing American focus on Ballymurphy, spearheaded by the AOH, along with of the Irish American Unity Conference and the Brehon Law Society.

King, a Republican from New York; Neal, a Democrat from Massachusetts; and Doyle, a Democrat from Pennsylvania, have long records of interest and leadership on Irish issues. They made a bipartisan call for the inquest to be “conducted thoroughly and justly to ensure that the families involved receive the answers they need,” according to the letter dated December 21.

Read more: Truth of the Para's Ballymurphy massacre is finally being told

Speaking outside the Ballymurphy Inquest @MaryLouMcDonald has called on the British government to release funding for legacy inquests and said it’s a “matter of utter disgrace” that families and survivors have been left to wait for decades without the basic right to an Inquest pic.twitter.com/pqKCOgwzWB

They also cited concerns that the “British Ministry of Defense may be deliberately withholding crucial documents and disclosure items,” and joined in expressing renewed concerns about British calls for a statute of limitations amnesty for British crown forces, previously made in an April 16 letter.

AOH Freedom for All Ireland chair Martin Galvin said, “These congressional leaders on Irish issues became the latest to describe the Ballymurphy inquest, as a ‘fundamental test of legacy justice in cases where British state forces are involved.’ There is a growing recognition that if families cannot get justice where there are eyewitnesses and a Catholic priest, and grandmother among 11 victims, then no family should expect justice in cases where British forces are involved in killings.

“At a time when there is little bipartisanship on major issues in Washington, the fact that Congressmen King, Neal and Doyle could join together to support justice for Ballymurphy shows the importance of this inquest to those truly concerned about legacy justice.

Thinking of the Ballymurphy families as the Inquest starts today. Like so many families, they've had to wait too long and struggle to hard for this day. We can't keep failing the people who've suffered the most because of our past.

“The AOH believes that American congressional scrutiny can help make a difference for Ballymurphy and all legacy victims in their long fight for truth and justice. We welcome this congressional letter and are pledged to continue to work with congressional leaders and other Irish American organizations in closely monitoring this inquest.”