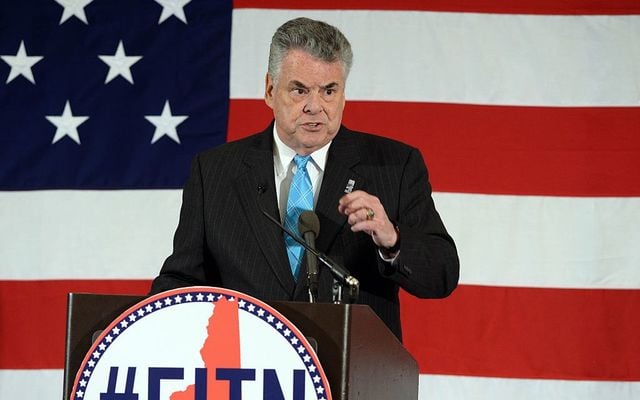 A prominent Irish-American Congressman has been accused of “highly inappropriate” lobbying in a bid to persuade Irish politicians to reject a proposed ban on imports from Israel's illegal settlements in Palestine.

Senators in Dublin passed the legislation to ban the sale of goods or services from the settlements this week, despite pressure from US Congressman Peter King (Republican, New York) who lobbied the leadership of Fianna Fáil.

Staff from the US Embassy in Dublin also paid informal visits to the Fianna Fáil politicians to see if they would oppose the Control of Economic Activity (Occupied Territories) Bill.

The legislation passed the third stage in the Seanad (the Irish Senate) without a vote on Wednesday night, after two previous votes in favor of Senator Frances Black’s private member’s bill.

In a letter to opposition party Fianna Fáil, the contents of which have been seen by IrishCentral, Congressman King accused those who backed the bill of “empowering Hamas terrorists” in Palestine.

“I just think it’s highly inappropriate that the US would try to interfere in the foreign policy of the Irish Government,” said Marie Crawley of Sadaka Ireland, who helped Senator Frances Black to draft the bill. 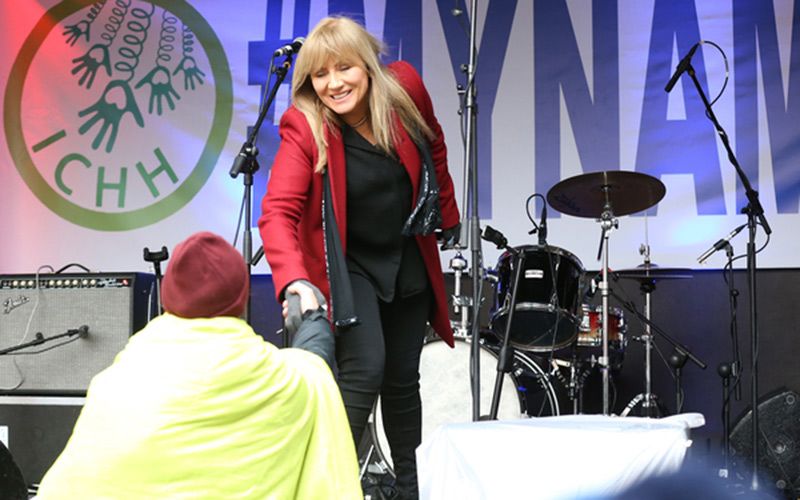 Frances Black preforming at a protest concert on the streets outside the Dail to protest against Ireland's ongoing homeless situation. Photo: RollingNews.ie

“We are an independent state that determines our foreign policy. I think it’s appropriate that our foreign policy is guided more by UN resolutions and international law than the interference of another state.”

She said the bill focused on the fact that the settlements on occupied land are considered to be war crimes and accused Congressman King of hypocrisy given his own history of talking to “terrorists” in Northern Ireland.

Although the settlements have been condemned as illegal by both the United Nations and European Union, Congressman King has depicted the Irish bill as subversive.

It would ban trade with goods and services from beyond the internationally recognized 1967 border, where more than 500,000 Israelis live in settlements in the West Bank and East Jerusalem.

"It is critical that countries and leaders interested in facilitating a lasting peace amongst Israelis and Palestinians not serve to empower the most radical, who have no interest in seeking peace," King stated in an email message addressed to Fianna Fáil's team in the Irish parliament.

He argued that the proposed ban on settlement goods was “undercutting Palestinians truly interested in peace and empowering Hamas terrorists."

Despite having strong connections to Ireland, Congressman King could not persuade Fianna Fáil to change its stance.

He lobbied Fianna Fáil last July, but the email correspondence only came to light this week.

The opposition party, which holds the balance of power in both houses, has now supported the bill three times since July. It passed the final hurdle in the Seanad on Wednesday and will now move to the Dáil (Irish parliament) in the New Year, before becoming Irish law.

King, from Long Island, has served in the US Congress since 1993. He has been a long-term supporter of Sinn Féin and the peace process in Northern Ireland but has been accused of double standards this week in Ireland.

His stance on Palestinian “terrorists” resisting an illegal occupation is seen to be at odds with his own views on Irish republicans before the historic Good Friday Agreement in 1998.

Although he suggests that Hamas should be isolated, King encouraged dialogue with Irish republicans at a time when the British government was refusing to deal with them. 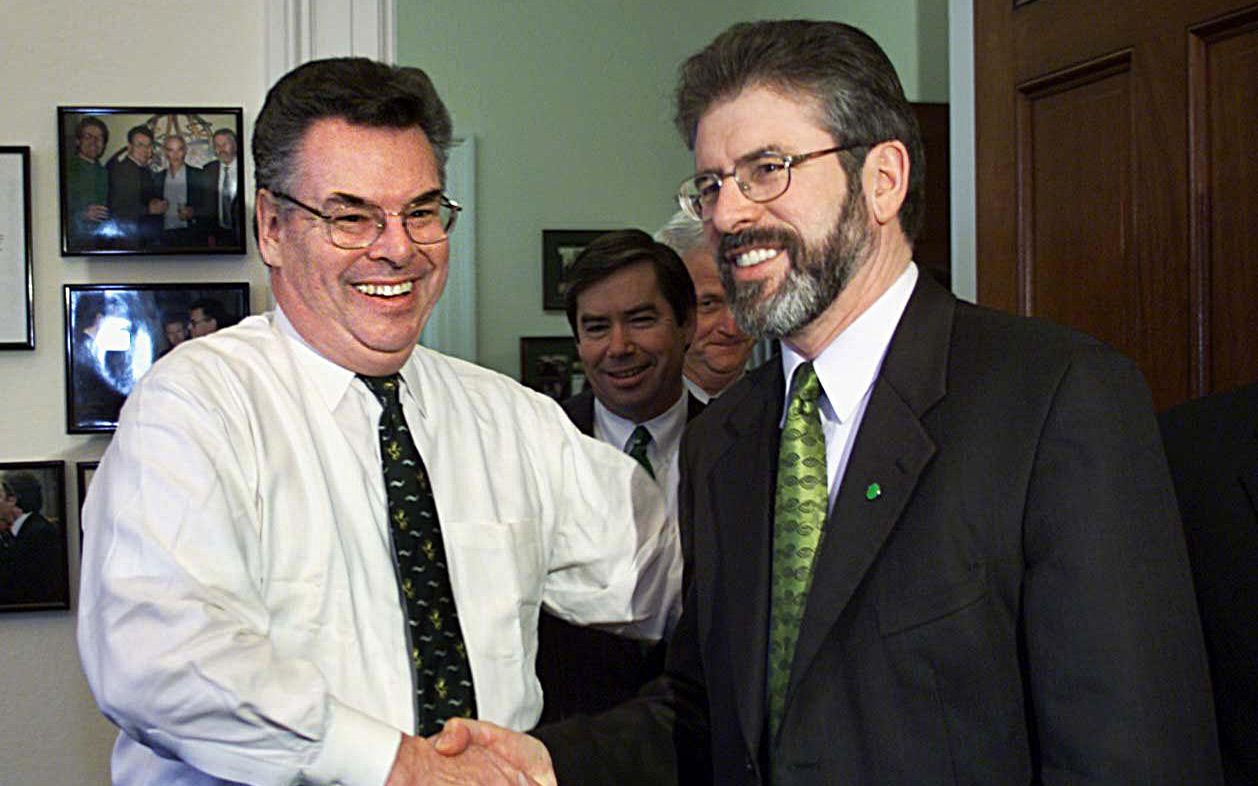 He took credit for persuading Bill Clinton, then US president, to issue a visa for Gerry Adams, then-leader of the political party Sinn Féin, in 1994.

Adams' visit to New York, facilitated by the veteran Congressman King, is widely recognized as having helped to advance peace in Northern Ireland.

Earlier this year, Congressman King was described by An Taoiseach, Leo Varadkar, as “a very good friend to Ireland” because of his work on the peace process.

Varadkar’s Fine Gael party has consistently opposed the Occupied Territories Bill in the Seanad since July.

Congressman King made headlines on both sides of the Atlantic last year when he supported US President Trump’s executive order to ban people from seven predominantly Muslim countries.

Senator Frances Black (Independent), who moved the bill, said she admired Fianna Fáil for continuing to support it despite lobbying from the US.

Incredible - the Occupied Territories Bill has just passed all stages in Seanad Éireann! Ireland can be the first EU country to end trade in illegal #SettlementGoods. It now goes to Dáil for agreement, & with such huge support we'll make this vital bill law! #solidarity  pic.twitter.com/uwQoQ665UT

She said it was ironic she was being accused of “empowering Hamas terrorists” when the bill had the support of respected charities Trócaire and Christain Aid Ireland.

“I think US Congressmen should leave well enough alone and let us get on with our work over here, and do the right thing,” she told IrishCentral.

“I fully condemn all violence. Of course, I do. This bill has absolutely nothing to do with Hamas. It’s about answering the call of civil society in Palestine and offer non-violent, peaceful resistance to the occupation. That’s exactly what we are trying to do.”

She said that the whole world paid attention to the Dunnes Stores strikers in Dublin who helped bring about the demise of the Apartheid regime when they refused to handle South African goods in 1981.

Those women were later thanked in person by President Nelson Mandela when he came to Ireland.

“All we are looking for is a bit of respect for international law. We’re a small country and we are trying to stand for what we believe is justice,” she said.

We commend the members of the Seanad for their work on @frances_black's Occupied Territories Bill & look forward to supporting the passage of this Bill through the Dáil & to its enactment into law. pic.twitter.com/dIARroFQsL

“The support we are getting is so overwhelming, emotional, and moving. The Irish people are really behind this. I don’t think Irish-Americans are fully aware of how much Irish people empathize with Palestinians who are living under an illegal and brutal occupation.

“I don’t know if people are aware that international law is being broken in Palestine. This bill is seeking to end trade with goods from illegal settlements. The UN, EU, and the Irish Government keep saying these settlements are illegal.”

Foreign Minister Simon Coveney has claimed that, as a European Union member, Ireland may not unilaterally ban Israel's settlement goods.

On Wednesday night, Minister of State Helen McEntee said that the bill was contrary to EU law, as external trade rules were decided by the EU rather than individual states. The Irish Attorney General has claimed it was not compatible with EU law.

“I think the Irish Government is probably fearful of Ireland leading on this," said Senator Black.

"They are fearful of what the European Union and the United States might say. They said the same thing with the Dunnes Stores workers, that we couldn’t lead on this, but I’m saying that we can lead on this and that the people of Ireland want this.”

Ciaran Tierney won the Irish Current Affairs and Politics Blog of the Year 2018 award in Dublin recently. Find him on Facebook or Twitter here. Visit his website here - CiaranTierney.com.