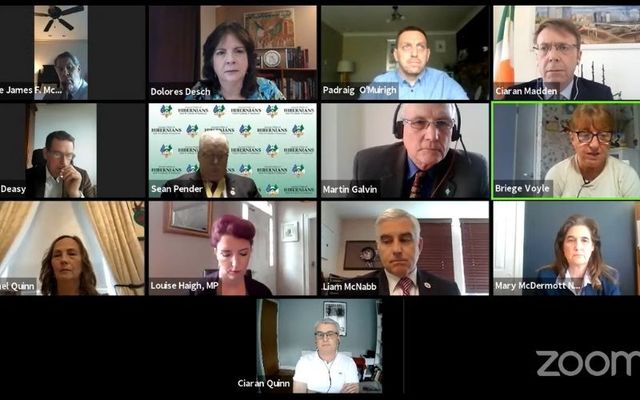 Relatives of Ballymurphy Massacre victims asked “why British troopers shot our innocent loved ones” during a live webinar broadcast on May 15 hosted by the Ancient Order of Hibernians, following Judge Siobhan Keegan’s inquest verdict on May 11.

The emotional plea came in a series of dramatic revelations made by victims’ relatives John Teggart, Briege Voyle, and Carmel Quinn, accompanied by solicitor Padraig O’Muirigh.

The broadcast opened with video showing the jubilant reception given the campaigners on their return to Ballymurphy after the inquest verdict. AOH National President Danny O’Connell then read the names of each of the 10 victims shot dead by British troopers between August 9-11, 1971.

Menendez congratulated these families whose loved ones had been declared innocent after almost 50 years. He promised quick passage of his Senate Resolution co-sponsored with Senator Susan Collins, which includes full implementation of the Stormont House Agreement and justice for all victims killed by state-sponsored violence.

In remarks clearly pointed at British trooper amnesty plans, Chris Smith said there should be “no expiration date on justice for Ballymurphy.” He noted that Teggart had testified in a congressional committee in 2011, but it took 10 more years for Keegan to proclaim what the families have been saying for almost 50 years, that every victim of the three-day massacre was innocent.

Even long-time followers of the Ballymurphy campaign were shocked by new revelations. Voyle said that none of the families knew the full story of what happened to their loved ones, until they got the autopsy and medical records under the inquest discovery.

Her mother, Joan Connolly, left her home after hearing a wounded man crying out for help.  Mrs. Connolly, a grandmother, and mother of eight children, was shot in the face as she went to help Noel Phillips. She was not given any medical treatment which would have saved her life, but left on the ground to bleed to death over several hours.

Noel Phillips was later shot execution-style, with bullets fired behind each ear. Daniel Teggart was shot 14 times. Joseph Murphy was also shot in this incident and died two weeks later from his wounds.

The British had cover stories for each killing, claiming they were gunmen and gunwomen who had fired on British troopers. No weapons were found.

Keegan said all four people were totally innocent, and there was no justification for killing any of them. There was no adequate investigation in their deaths until the inquest.

Voyle called on the British to “tell us why you shot them!”

Carmel Quinn was eight years old when her brother John Laverty was murdered along with Joseph Corr.  British press officer Mike Jackson held a press conference before the dead bodies were removed. Jackson, who became Britain’s highest-ranking general, told the press that the two men were IRA volunteers who fired at British troopers with a machine gun and pistol.

No weapons were recovered near their bodies.  The men were clearly unarmed, and an autopsy revealed they were both shot in the back. Quinn said, “The British cover-up began while the dead bodies were still lying in the street”.

Solicitor Padraig O’Muirigh outlined why it took 50 years for these families to get justice. After the killings, the British Royal Military Police rubberstamped the murders.

British troopers who fired the fatal shots simply refused to attend the inquest or give the court any reason for opening fire. Those who attended usually hid behind screens or refused to be identified by name.

The families rejected what they termed Boris Johnson’s non-apology. Johnson was not even present in Westminster when his secretary Brandon Lewis mentioned Ballymurphy. A letter delivered moments before Lewis spoke stated regret for the events without any acknowledgment that the British crown had murdered their loved ones.

The families received important statements of congratulation and support. Madden said the Irish government opposed any amnesty and any departure from the Stormont House Agreement. Haigh accused Johnson of an inexcusable lack of basic decency.

The Ancient Order of Hibernians National Freedom for All Ireland Chairman Martin Galvin added, “The Ballymurphy Massacre families have been an inspiration to the families of hundreds of victims murdered by British crown forces directly or in collusion with loyalists. The inquest verdict was a triumph for them and for all Irish victims’ families who have been denied justice.

“Britain responds by trying to impose trooper amnesty laws and to cut out historical investigations from legacy laws. The crown wants to bury the truth along with its victims. They must not be allowed to get away with it.”