The AOH has called upon the US government to pause any trade negotiations with the UK until the amnesty proposal is withdrawn. 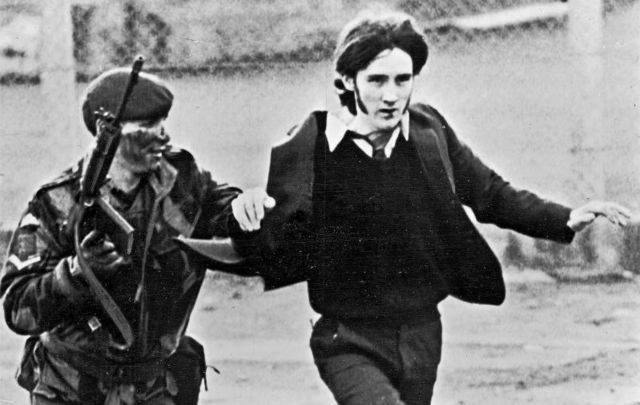 The Ancient Order of Hibernians (AOH), the largest Irish American organization in the United States, has condemned Britain's announcement to create a special statute of limitations for “all Trouble’s Related Incidents” [sic].

A model of British understatement, such “incidents” including the murder of innocent civilians and numerous human rights violations by British forces, the AOH said in a statement issued on Wednesday.

The statement continued: "The announcement delivered by Northern Ireland Secretary Lewis has achieved one singular distinction: he has succeeded in uniting and rallying the community of Northern Ireland irrespective of faith or identity and all major political parties in common cause against his proposed amnesty.

"Would that Mr. Lewis could have achieved such unanimity in approval of a measure that advanced peace in Northern Ireland rather than achieving consensus in condemnation of his efforts on behalf of Britain to evade justice.

"The universal outcry from the community of Northern Ireland makes clear that Mr. Lewis’ proposal serves only one interest: that of the British government in Whitehall.

"The British government has, despite signed commitments under the 1998 Good Friday Agreement, the 2014 Stormont House Agreement, and the 2020 “New Decade/New Approach” Agreement, continued to thwart any attempt at a clear and transparent inquiry into the legacy of the unresolved issues of the conflict in Northern Ireland and the role of its agents including charges of collusion and state-sanctioned murder.

"Hearings to address the legacy of the conflict in Northern Ireland have been continually stalled and promised funding for investigation withheld. Evidence in police custody has been destroyed in a series of implausible “accidents,” while other key evidence has been reported as having been “lost” only to be “found” on display at London’s Imperial War Museum. Journalists investigating these failures by the government have been arrested and intimidated. Given their well-documented campaign to evade transparency and accountability, the contention by the British government that now too much time has passed for effective prosecution is the height of arrogance.

"The United States would not silently tolerate such actions and coverup by a government in Africa, Asia, South America, or the Middle East; it can not in good conscience be silent now.

"No 'special relationship' should extend to condoning injustice and human rights violations. We are reminded of the words of Dr. Martin Luther King that 'injustice anywhere is a threat to justice everywhere.'

"The announcement by British Northern Ireland Secretary Lewis marks yet another instance of Britain unilaterally renegotiating the international agreements it signs; they are demonstrating a similar pattern of behavior regarding the Irish Protocol of the Brexit Withdrawal Agreement.

"Common sense dictates that no one should enter into a new agreement with a partner who has such a history of defaulting on its commitments.

"Given the pivotal role that the United States played in the historic Good Friday Agreement, the Hibernians call on President Biden and all members of the House and Senate to strongly denounce this latest violation by Britain of that historic agreement and put on hold any trade negotiations with Britain until Northern Ireland Secretary Lewis’s proposal for amnesty is withdrawn, and Britain delivers on their existing long-overdue commitments under international treaties regarding Northern Ireland."