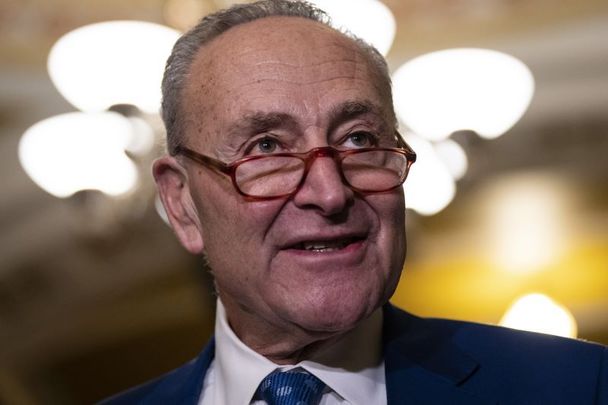 November 15, 2022: Senate Majority Leader Chuck Schumer (D-NY) speaks to reporters after a meeting with Senate Democrats at the US Capitol in Washington, DC. Getty Images

Chuck Schumer, the Senate Majority Leader, signaled his support for Irish unity while receiving an award presented by the New York Ancient Order of Hibernians on Sunday, November 20.

“Unity based on mutual respect, self-determination, protection of all people of all backgrounds on the island of Ireland,” Schumer said at Sunday's event, the Irish Times reports.

Senator Schumer also remarked that Sinn Féin’s success in Northern Ireland's Assembly elections in May was “amazing” and “something to be thankful for.”

In July, Schumer met with O'Neill after Northern Ireland's Assembly elections, during which Sinn Féin emerged as the largest party for the first time ever.

Schumer, US Senator for New York, was speaking at the Bronx County Board of the Ancient Order of Hibernians annual dinner dance on Sunday, which was dedicated to the American wives of Irish political deportees.

Elsewhere during the event, Senator Schumer said that “there will be no trade deals done” if there is any “backsliding” on the Good Friday Agreement.

“We must protect the open border,” Schumer said, “there can be no return to a hard border.”

He also was critical of the UK’s proposed amnesty legislation, saying: “We must oppose unwelcome efforts in the UK to pass the regressive so-called legacy legislation which will undermine the ability of victims of the Troubles when seeking truth and justice.”

He said the legislation was “wrong” and that the US will “pressure Britain not to do it.”

He also called for immigration reform and said it was necessary to work together to “find ways to re-energize legal immigration from Ireland.”

The AOH said in a statement to IrishCentral on Monday that it welcomed Schumer's remarks.

"As shown by the content of his statement, the Senator is highly knowledgeable about the situation in the north of Ireland and has been a consistent friend to Irish causes," the AOH said.

"We thank the Majority Leader for his commitment that Britain's attempt to undermine the Good Friday Agreement and the peace of Ireland will not be rewarded by a US trade deal.

"We also applaud the denouncement by the Senator of the British proposal to deny the victims of the conflict in Northern Ireland long overdue truth and justice by granting an amnesty for murder.

"We hope that Senator Schumer will ask the administration to fill the too-long-vacant post of Northern Ireland Special Envoy showing a tangible interest and commitment by the US to the Good Friday Agreement and peace in the north of Ireland.

"We also appreciate the Majority Leaders' commitment to removing the 'No Irish Need Apply' sign currently hanging on the Golden Door of US immigration. That this year only 17 visas from a pool of 55,000 Diversity visas were awarded to inhabitants of the isle of Ireland, less than 10% of the Medal of Honor Recipients who list Ireland as their place of birth, is an injustice whose remedying is long overdue."

Senator Schumer spoke at the AOH event not long after the organization launched its Freedom For All Ireland Christmas Appeal, which helps the AOH "provide financial help to groups that assist in our goal of achieving complete and absolute independence, peace, and unity for all Ireland."