In an unprecedented step, two of the three top elected politicians in the US warned the British not to meddle with the Good Friday Agreement. 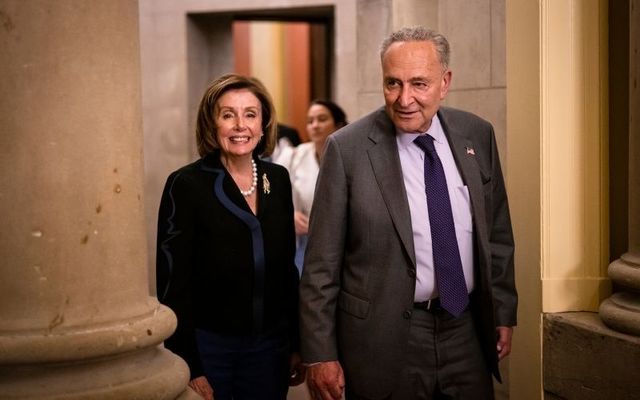 US Speaker Nancy Pelosi and Senate Majority Leader Chuck Schumer both spoke out separately over the weekend warning the British government to safeguard the Good Friday Agreement at all costs.

He stated that he had informed the British that there would be major consequences in America if the Brexit dispute damaged the Good Friday Agreement. He stated he stood in full solidarity with Irish America and the Irish government and stated that trade partnerships and relations with Britain and the US would suffer greatly.

Schumer stated he was “totally committed” to the Agreement and that it could not be diluted.

He spoke about his own warm links to the Irish American community who, he said, had always supported him.” We’re on the one road together” he stated.

The Martin McGuinness Peace Foundation was set up after the untimely death of the former Sinn Fein Chief Negotiator, It aims to pursue peace and social justice issues.

Meanwhile, in London, Speaker Nancy Pelosi was warning the British government on Friday not to interfere with the Agreement.

Pelosi stated at a conference held at Chatham House, a London think tank, that Britain and the US  will “probably end up” striking a bilateral trade deal, but agreement is “very unlikely” if the terms of the GFA are broken.

“This is not said as any threat, it’s a prediction, if there’s destruction of the Good Friday accords, we’re very unlikely to have a UK-US bilateral,” the speaker said.

Pelosi stated that the Good Friday Agreement, signed in 1998 was one of President Clinton’s great foreign policy victories. Support for it is also bipartisan in the US Congress.