The St. Pat's for All Parade made its triumphant return to Queens after a two-year pandemic hiatus on March 6. 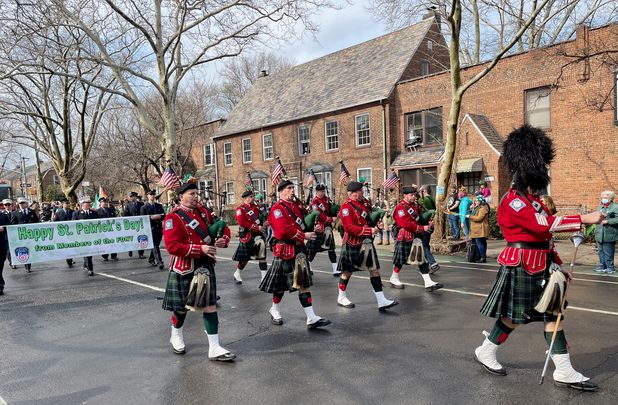 After a two-year pandemic imposed hiatus, the St. Pat's for All Parade stepped off again in style in Sunnyside, Queens on Sunday, March 6.

Enjoying the fine spring weather, the crowds came out as never before to cheer on marchers in the strongly Irish neighborhood.

Before the march stepped off, a who's who of the city's top-tier Democrats assembled on the dais, with two notable exceptions. Prominent no-shows included the City's new Democratic Mayor Eric Adams (who had participated in the Rockaways parade the day before) and Congresswoman Alexandria Ocasio-Cortez.

Mayor Adams is the first Mayor to eschew marching in the colorful and inclusive parade since it first stepped off in 2000. Meanwhile, Congresswoman Ocasio-Cortez, who has been a strong supporter since she entered public life, had supporters carry her political banners.

“I don't see why so many politicians are still hogging the stage,” one parade goer groused to the Irish Voice, sister publication to IrishCentral, before the march began. “We won. This is an Irish and LGBT parade and it welcomes every group who wants to celebrate the Irish and our heritage on the day. I can't understand why it's still all politicians up there talking.” 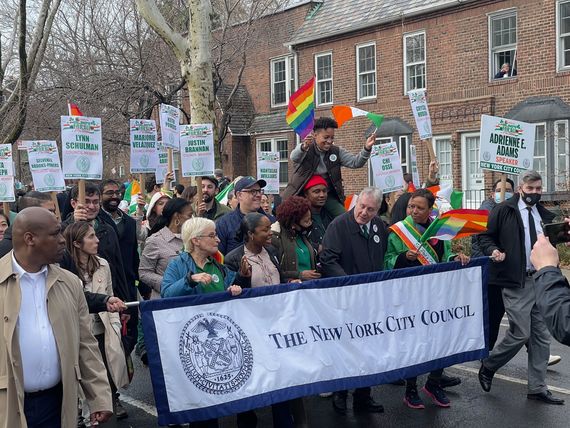 The New York City Council march in the St. Pat's For All Parade

The parade, which has its origins in the long exclusion of LGBT Irish groups from the main Fifth Avenue parade, is perhaps the most riotously colorful and inclusive St. Patrick's Day parade in America, explaining the Irish government's investment in the message it sends to the wider nation about welcome and participation.

This year's parade was dedicated to the memory of legendary Belfast-born, LGBT activist Tarlach Mac Niallais, who was an organizer, supporter, and participant of the parade and who died of COVID-19 on April 1, 2020, aged 57.

Mac Niallais immigrated from Ireland to New York City in the 1980s where he later agitated for Irish LGBT organizations to march under their own banners in the main New York City St. Patrick’s Day Parade on Fifth Avenue. Two of his brothers, in town for the parade and commemoration, told the crowd that Mac Niallais' memory “will live on as long as we do.” 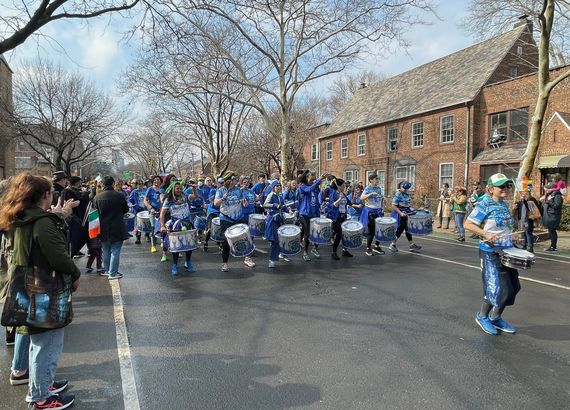 Samba Band Fogo march in the St. Pat's for All Parade

Kathleen Walsh D’Arcy, the new chair of the parade having served as co-chair alongside Brendan Fay who stepped down from his role as co-chair of the event earlier this year, was lauded for the work she has done to expand parade participation and community outreach.

Irish American Council Member Keith Powers, who heads the Irish Caucus in the City Council, told the crowd that St. Pat’s for All is symbolic for its inclusiveness. “This parade has been symbolic for its inclusivity throughout its time here and at a moment where we need it to embrace and show that every New Yorker they can be part of our community.” 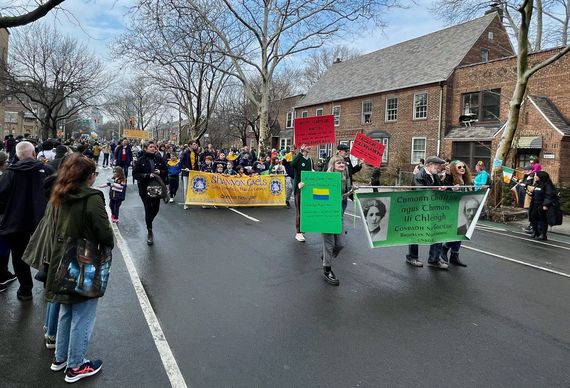 Shannon Gaels GAA club march in the St. Pat's For All Parade

Queens Borough President Donovan Richards told the crowd “When I see beautiful people, LGBTQ, Irish, Black, Greek, Asian, Latino, standing here together, we can all be proud of a St. Patrick's Day where we all stand together.”

Colorful Irish-themed street parties were held in the gardens of houses that lined the route with tricolors and pride flags predominating. Irish marchers on the day included Consul General Helena Nolan.