A new play at The Irish Rep dramatizes the life of 15-year-old Ann Lovett, whose death in a grotto - after delivering a child - shocked the world. 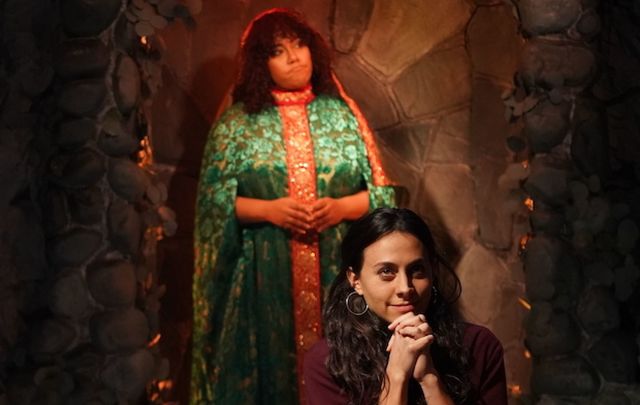 January 31, 1984, was a cold wet winter's day across Ireland. That morning, in the little town of Granard, County Longford, a 15-year-old girl called Ann Lovett gave birth to a baby boy beneath the statue of Our Lady in the local grotto.

No one was there to help her. No one in the town even knew she had been pregnant, they later claimed.

Now Ann's all too brief life and tragic death are the subjects of Irish playwright Ciara Ni Chuirc's hard-hitting new drama Made By God, which is now playing through March 20 at The Irish Rep. 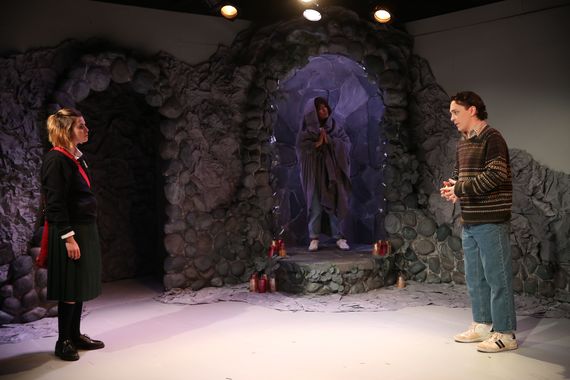 McKenna Quigley Harrington, Briana Gibson Reeves, and Daniel Marconi in the 2022 Irish Rep production of Made By God

Set in 1984 and also decades later - when a young American podcaster named Eva travels to Ireland to learn more about Ann from her haunted former boyfriend Michael - faith and feelings quickly intertwine on-stage as two total strangers draw each other out in their attempts to make peace with their respective pasts.

Ni Chuirc was born in 1990, long after the events that are depicted in this play, so the details may not have quite the same immediacy as they do for Ann's contemporaries, many of whom still carry the memory in their bones. Perhaps that's why she creates the contemporary character Eva, the quietly pro-life American Christian who has come to Ireland to try and reconcile her faith with her unexpected doubts.

McKenna Quigley Harrington plays Ann as a smart, soulful but frightened girl who is being killed by the secrets she is being forced to keep. Erica Hernandez plays Eva, the flinty but secretive American podcaster whose open manner is nonetheless concealing a terrible secret.

Ciaran Byrne plays the older Michael, Ann's former boyfriend, with a nicely rueful turn that suggests years of hidden anguish that he's only now stepping out from and Daniel Marconi plays the younger Michael, the one who is hardest hit by Ann's lonely fate, the one who has to walk away from the smoking crater she leaves behind, still scorched by the blast. 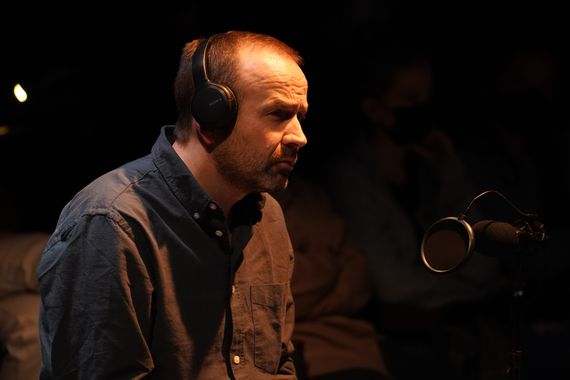 Ciaran Byrne in the 2022 Irish Rep production of Made By God.

Briana Gibson Reeves does the play's heaviest lifting, playing both the Virgin Mary in the Granard grotto and Our Lady of Guadalupe, in a way her own counterpoint, an image of motherhood, pregnancy, and paradoxically virginity, sometimes in the one scene.

Made By God asks more questions than it answers and this is intentional, the plays Irish trained but American born director Olivia Songer tells the IrishCentral. “I personally think Ann didn't speak up because she wanted to protect her boyfriend Michael. There's letters that she wrote at the time that were addressed to him and he took them to the local priest and the priest made him burn them."

"Apparently they said no one would believe this was your child. She had been abused in different situations. She was trying to protect him and she very sadly had to sacrifice herself. The name-calling and the ridiculing and the chatter amongst the town meant they knew, everybody knew, whether they admitted it or not, everyone knew...”

It's the silence that is the most haunting part of this play. The silence that follows when Michael asks Ann directly what has happened to her, the silence that descends on the town after she dies. Tell the truth and the whole edifice collapses, the play reminds us. People will do almost anything to prevent it from being told. This uncompromising play deserves to be seen for that reason alone.