After years of hard work and preparation, the Shannon Gaels unveiled their two new GAA fields during a joyous celebration at Frank Golden Park in College Point, Queens. 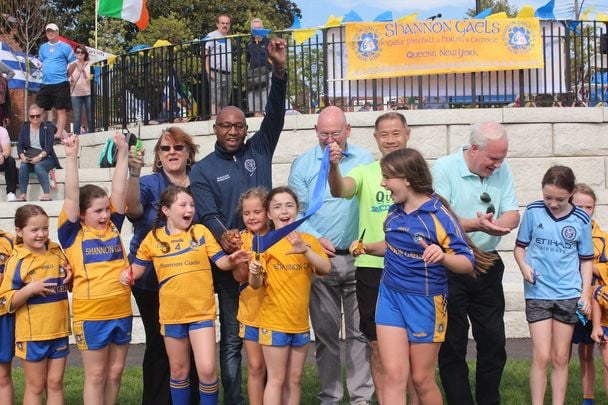 Saturday, October 16 will be marked as a red-letter day in the history of the Shannon Gaels GAA club. It was the culmination of a lot of hard work, dedication, fundraising, and volunteerism that saw a dream realized after 20 years -- the grand opening of the Shannon Gaels facility at the Frank Golden Park in College Point, Queens.

It was a grand event with a great crowd, a festive and familial atmosphere interspersed by the finest aspect of Irish history, culture, heritage, and of course Gaelic sports, namely football, hurling, and camogie. The best of Irish hospitality was there for all as nobody went home hungry or thirsty.

The large scale of events was moved expeditiously by former chairman and current board member Sean Price.  The speeches were short, informative, and sprinkled with good-humored banter. The very diverse slate of politicians embraced their ad hoc Gaelic-ized names with aplomb.

Indeed it could nearly be said that they were approximating what was stated about the Normans: they were becoming more Irish than the Irish themselves.

There’s certainly a grain of truth in the hyperbole, because collectively through their staunch support for the project they ensured that the best aspects of Irish culture would have a secure home and continue to flourish in Queens.

The day’s proceeding got a beautiful start with Shannon Gaels players Roisin and Hanna coming from the playing fields to give harmonious renditions of the U.S. and Irish anthems, followed by the Ciara Green, McManus School and the Shannon Gaels schools of dancers.

Robert McDonagh, the current chairman, gave a brief history of GAA activities in Queens. Before the GAA was formed in New York, a group of Irish folks bought a piece of farmland in Laurel Hill, Queens in 1897 and named it the Celtic Park Athletic Grounds. Here for the next 30 years, it was the main facility for the GAA, where hurling and football games were played as well as hosting other major athletic events. 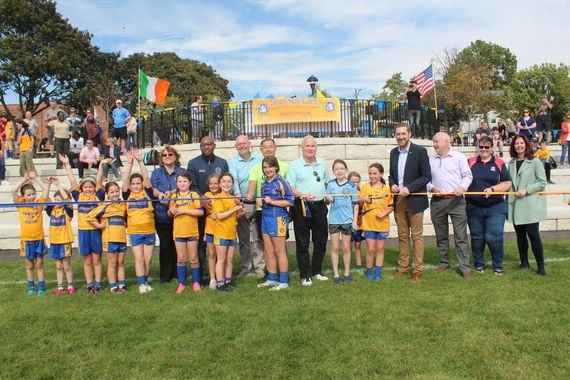 Several Olympian medalists honed their skills there, including the legendary Jim Thorpe. Over the three decades, there were issues with the leaseholders, the police, and even rival sports. Games were occasionally interrupted by the police because games on Sunday, the Sabbath Day, were deemed to be in contravention of the Blue Laws.

On one occasion the Union Jack was forcibly removed after it had been installed prior to a soccer match. Apparently, the playing surface wasn’t ideal, being described as “a mass of small stones and sand.”

Eventually, the rent became prohibitively expensive, forcing Gaelic games to Steinway Park in Astoria before moving to Innisfail Park, which is known as Gaelic Park today.

The chairman noted that the dream of owning their own playing fields started exactly 12 years ago when Mayor Michael Bloomberg visited Sunnyside Gardens for the club’s annual field day at the invitation of Ciaran Staunton. Evidently, the mayor was impressed by the hordes of youth athletes playing sports in rather tight confines, and he asked Staunton what he could do for Shannon Gaels and the Irish Community. He certainly had the right reply for the mayor, stating, “You could start by getting the young children a suitable field to safely play Gaelic games on.”

The scene was set and the journey began and ended with the wonderful facility that now exists. Bloomberg immediately requested the then Queens Park Commissioner Dorothy Lewandowski find a spot. A number of sites were looked at, but it was decided that an under-utilized Frank Golden Park in College Point met the basic criteria in terms of space, size, and accessibility, though it was far from the finished product.

Then the club members rolled up their sleeves and along with help from the park staff, the baseball diamonds were removed, a couple of drains dug and a set of goalposts erected.

McDonagh said he could not be more proud of what has been achieved over the last decade with two playing fields, the first time in GAA history that there is a full-sized field built specifically for Gaelic games in Queens. He thanked the founding members for their vision as well as the efforts of chairpeople Richie Corridan, Collie Mathers, and Sean Price who successfully steered this awesome project to such a historic conclusion.

He also acknowledged the great support that came from GAA headquarters in Ireland, particularly the then President Liam O’Neill and Pauric Duffy, the director, who pledged over €500,000 to the project. In addition, he noted the tremendous support from Peter Ryan, the deputy consul general from 2011 to 2014, and Jimmy Deenihan, the then minister for the diaspora who negotiated over €250,000 for the fields. The club itself raised over $1 million.

McDonagh paid tribute to the great work done by Kelco Contracting Company and owner John Kelly. Overall he said that for the official opening there was a budget of $5.2 million fully funded by New York City.

Queens Borough President Donavan Richards was on hand and said that “it was a few great men who made this possibility a great reality, plus it would be a great benefit to the important jewels in our community, the young people.” He noted that sports bring people together, and he himself would be prepared to take on his opponents, on the said fields, though hurleys might be problematic.

State Senator John Liu was on hand, as was Dermot Fitzpatrick, Ireland’s vice-consul general.   He paid tribute to the volunteerism, dedication and commitment of the club, guaranteeing that the finest aspects of Irish culture will continue to thrive in Queens.

Over the years McDonagh said that he got tremendous help from the Queens Borough President’s Office and from Liz Crowley and City Council Member Danny Dromm.

Joan Henchy was unable to attend due a congress meeting in Dublin, but the New York GAA Board was represented by secretary Liam Bermingham, who said the new facility would be a great asset to the GAA, as numbers are rapidly exploding.

He also pointed out another milestone in the Big Apple’s GAA history, namely St. Barnabas, an All-American team winning the New York senior championship, and that could eventually be the pathway for Shannon Gaels. Danny Browne, chair of the New York Minor Board, and vice-chair of Shannon Gaels, expressed a similar sentiment in his remarks. He said the “Field of Dreams” had become a reality, but it didn’t happen because of dreaming, but lots of hard work. He stressed that the most important group in promoting Gaelic games is the under-seven program.

The Tyrone man stated, “To grow apples, you must plant apple trees, and they will produce the apples.”

Nollaig Cleary, chair of Cumann Peil na mBan and Ellen McGrail, from Gaelic 4 Girls, spoke of the importance of continuing to produce players at all levels as many native players have already graced the hallowed grounds of Croke Park.

Others attending the grand opening were Council Member Paul Vallone, Queens Budget Director Richard Lee, City Council candidate Tony Avella, Ciaran Reilly from Irish Repertory Theatre and Margaret McHugh from the Community Board.  McDonagh thanked Mia and Garfield from the park staff, along with the volunteers, coaches and everyone who helped get the club to this level as well as those who contributed to the celebratory events.