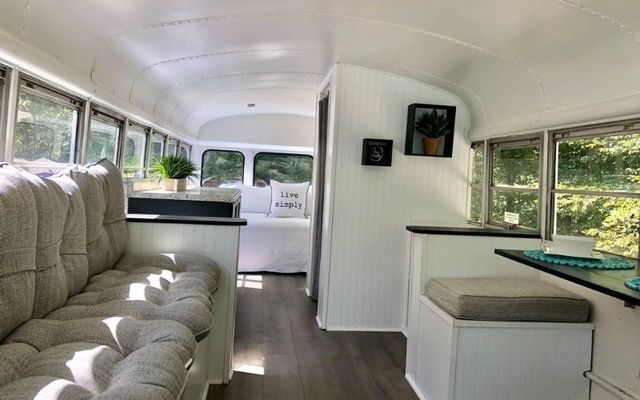 An Irish-American family in North Carolina is turning disused school buses into RVs in honor of a much-loved son and brother who perished in a motor vehicle accident in 2015.

Megan told the Cape Cod Times that she was inseparable from her younger brother and added that she dropped out of college at Elon University in North Carolina following his tragic death.

Her mother Lisa fondly remembered photographing the pair as they waited for the school bus at the start of each academic year and remembered her son as an "old soul" with aspirations of becoming a Navy SEAL.

Both Lisa and Megan remember Michael as an outdoorsy type who liked to take his friends on survival weekends where they would eat the food of the land and build makeshift lean-tos as shelter.

Devastated by her younger brother's death, Megan decided to focus on doing something creative to honor his memory.

She subsequently came across an old school bus at Wheeley Auto Mall while driving the back roads of North Carolina and promptly bought it for $1,200. The rest was history.

The initiative pays homage to Michael's love of adventure and life's simple things, with each new bus bearing a unique design.

Lisa Donahue has used her extensive experience as a visual design coordinator to convert the buses into homely and comfortable motor homes. Lisa's husband David Donahue then installs tires and rims on the former buses.

Megan told the Cape Cod Times that the buses are designed based on an item that they have fallen in love with - normally a pillow.

The buses' color schemes are then based on that unique item, giving each bus a singular feel.

One bus, for example, has a black and white chequered floor with a black countertop and white cabinets, while a bus that Megan and her friend Bob Field are currently working on is powder blue and boasts an outdoor shower.

The new bus - called "Linus" - is powered by solar panels and batteries and is designed to work off the grid without the need for electricity.

Megan expects upward of 500 people to get in touch with her once Linus goes up for sale on Facebook Marketplace.

The 23-year-old personally vets all applications for Live Simply Buses and says that she is picky about who gets to own buses designed in her brother's honor.

Megan, who is currently working on Linus in Eastham, Cape Cod where she used to live, plans to work on a new short bus with her mother when she returns to North Carolina.

She also plans to launch a line of t-shirts and sweatshirts by buying clothing from thrift stores and adding a Live Simply stamp on them.

Like the Live Simply buses, each item of clothing will be unique.

Meanwhile, Bob Field, who is a licensed builder, is considering branching out and retrofitting smaller vehicles such as vans under the Live Simply brand.