How history, oral tradition and literature can remind us of Ireland's great tradition of food. 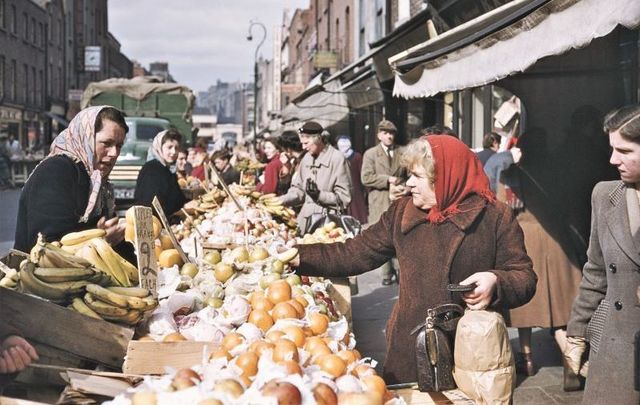 Shoppers at a fruit stall on a street in Dublin, Eire, June 1955. How history, oral tradition, and literature can remind us of Ireland's great tradition of food. Getty Images

What is the history of Irish food? It's much more than the potato.

The first settlers arrived at Ireland’s coasts in 8000 BC, but the potato only arrived in Europe some 400 years ago. So what was it exactly our ancestors lived on? On a magical evening in the Brewers Dining Hall at the Guinness Storehouse in James’ Gate, I had the pleasure of enjoying a sumptuous feast prepared by Guinness Storehouse Executive Chef, Justin O’Connor.

As well as a dinner of Irish food, we had great entertainment in the presence of Irish food historian and Dublin Institute of Technology lecturer (professor) Máirtín Mac Con Iomaire.

With snippets of food history, bardic recitation, and even a song, Mac Con Iomaire stirred the diners' thoughts, to think of Ireland’s food and what our forefathers would have eaten.

“The first people who came here were hunter-gatherers. When they arrived in Ireland the country was covered in trees," said Mac Con Iomaire. “So those people made their way along the coast or in boats up the rivers and that's how they broke their way in.

“What would they have to hand? Oysters would have been huge, scallops, mussels, herrings, all the various fish but particularly shellfish that you could forage along the coastline.

“Also there was things like wild garlic, wild watercress, myrtle berries, grouse, all kinds of wild birds all sorts of wild animals, and they were all eaten.”

Archaeological evidence has shown us not only what Ireland's prehistoric residents ate but also how they lived. Mac Con Iomaire reminded us that those people of Ireland built Newgrange, in total alignment with the winter solstice, 500 years before the pyramids in Giza and 1,000 years before Stonehenge.

He said, “They really knew their stuff and I think it's important to remember this. We come from a sophisticated people.

“So much of the discourse about Irish food seems poisoned by the Famine and thinking that we are just this poor nation who had nothing and no education, and emigrated and starved, but if you go back that bit further and back to Newgrange that's a much better place to start and to see just how sophisticated our ancient ancestors were.”

From 8000 BC to now has been a long journey and what we ate along the way has been recorded, at least to some extent. There are even some tales about food from pre-Christian Ireland that have survived to this day.

In Ireland’s mythology, there’s evidence of what we ate. Most famously perhaps in the tale of Queen Maeve of Connacht.

Mac Con Iomaire explained that in these tales the heroes' and villains' wealth was always judged by how many heads of cattle they had. However, they rarely killed their cattle unless they failed to produce milk or were at death’s door. What they ate at the time was dairy-based.

“The white meat or the white foods in various different formats was what they ate,” said Mac Con Iomaire. “It was the curds and cheeses. There was a description of the type of milk that they drank at the time. It was a yellow bubbling milk, milk that needed chewing, milk that needed long chewing, slow chewing.”

The dairy industry in Ireland really does date back millennia.

He continued, “It's also interesting that Queen Maeve herself was also killed by a lump of cheese. It was a lump of hard cheddar in a sling that got her, did her in, in County Sligo on the top of Knocknarea.” 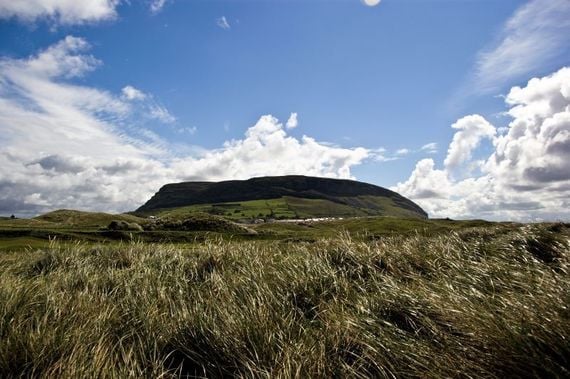 Another internationally famous Irish legend is the Salmon of Knowledge or “Bradán Feasa,” which saw the hero Finn Mac Cool cooking the magical salmon for his master. Burning his thumb with some of the oil he stuck it in his mouth and the knowledge became his.

There is more evidence of what the Irish chowed down on following the adoption of Christianity. The monks kept histories and records on paper, a move away from the bardic traditions that had prevailed.

The descriptions of our bountiful land recorded are impressive.

A poem from the 8th century “The Hermit’s Song” or “Marbán to Guaire” “gives you a little taste of food at the time”:

To what meals the woods invite me

There are water, herb,s and cresses,

A clutch of eggs, sweet mast and honey

All that one could ask for comfort

There are hips and haws and strawberries,

And when summer spreads its mantle

Marjoram and leeks and pignuts,

In “Aislinge Meic Con Glinne” or “The Vision of Mac Conglinne,” a parody written in the 11th or 12th century, another great description of the foods available is provided.

Mac Con Iomaire points out that this wonderful tale is a great example of the satire of the time. The Irish have always prided themselves on their hospitality. Their insistence that you have a cup of tea, a drink, or a piece of cake once you cross the threshold of their house is a throwback to bygone days.

He pointed out that this “comes back to the idea that any person who comes to the door could be Jesus and they would be looked after.”

And even before this, there were “the Brehon Laws and rules about how you behaved and what you were supposed to do when a stranger called. That was what was right to do and we kept doing it.”

This particular tale is about this young scholar from Fermanagh traveling the route of the Santiago de Compostela to Cork, and taking advantage of the monasteries' hospitality along the way.

Sadly, his stay in Cork was unsatisfactory and so he wrote this tale of the King Cathal mac Finnguine who is cursed with the "demon of gluttony" that lives in his throat. In the story, the hero comes up with a way to rid the king of his illness by starving him, chaining him up, and reciting the following description of a “vision” so the demon would come forth.

The fort we reached was beautiful,

With works of custards thick,

New butter was the bridge in front,

The rubble dyke was wheaten white,

A compact house and strong.

Then I went in:

The door of it was dry meat,

The threshold was bare bread,

Kept up the house.

What these rich descriptions clearly show is that Ireland had a deep tradition of great food before the arrival of the potato and it’s not only Ireland that the discovery of the New World changed.

“It's interesting to remind ourselves that until Columbus sailed off on the ocean blue and the New World was discovered that tomatoes, chilies, potatoes, corn, chocolate, all these things came to Europe, said Mac Con Iomaire.

“It's also interesting to think that the was no chilies in Chinese or Indian cooking until the New World was discovered. There were no tomatoes in Italian cookery or Spanish cookery. And there were no potatoes in Ireland.” 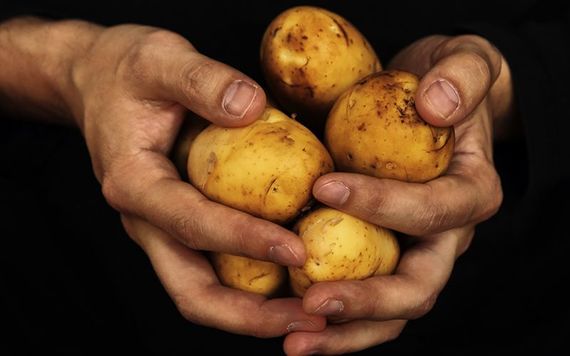 And when the potato arrived in Ireland, a lot changed.

“Ireland at the time was the most densely populated country in the whole of Europe. If you go through Sligo, Connemara, Mayo and look carefully enough you'll see evidence of lost villages that were just decimated.”

How did this massive growth occur?

The Irish were using the potato as a cleansing crop, as they found the spud, and later sugar beet added rich nutrients to the earth. At the time the other fields were mostly planted with wheat.

“That would be exported for the British and French army. We were also exported fantastic other things like salted beef from Cork, what we call corn beef. We were basically provisioning the British and the French navies for centuries. Particularly when they were fighting each other we were making great money out of it. We were feeding both sides.”

Every field of crops needed to be dug, plowed, planted, weeded, and harvested by hand. This meant there was a great deal of work for the poor Irish and also plenty of food to eat in the potato.

Mac Con Iomaire said, “They found that they could grow enough potatoes on one acre of poor or marginal land to feed a family of ten in a year, with very little work. Happy days. No wonder people started to get married at 16 and 17. They were having big families and thriving.”

Then came Ireland’s Great Hunger and everything changed.

“One million died and one million emigrated, people stopped subdividing the land, stopped having big families, waited until the parents had died before they got married and only one person would get married and everyone else would become a priest or a nun and be shipped off to America and so on…

“Since then we have become fascinated with potatoes. We become obsessed."

He pointed out that we need only look to our famous poets and writers for evidence apart from the stereotypes.

O half potato on my plate,

It is too soon to celebrate

You're boasted in the center, too,

And wet, in soapy soil you grew,

But I am thankful still to you

For hints of history given.

"There's something lonely far away

In what you symbolize to-day

For me - the half that went astray

Of life, the uncompleted.

With truer truth than truth of art,

And a generation defeated.

Secondly, he recited Seamus Heaney’s “In Memoriam” which is about that sacred quiet time with his mother when everyone's away at Mass. It’s no coincidence that this was recently voted as the Irish people’s favorite poem in “A Poem for Ireland” poll, carried out by the RTE.

Irish food has certainly come a long way, but what our meal at Guinness, made up of oysters, black pudding, braised lamb, wild garlic, and other delicious Irish foods, showed is that there’s more to the history of Irish food than the humble spud. It’s worth sitting back and considering our ancient ancestors' knowledge of the land and also appreciate those who kept these records.