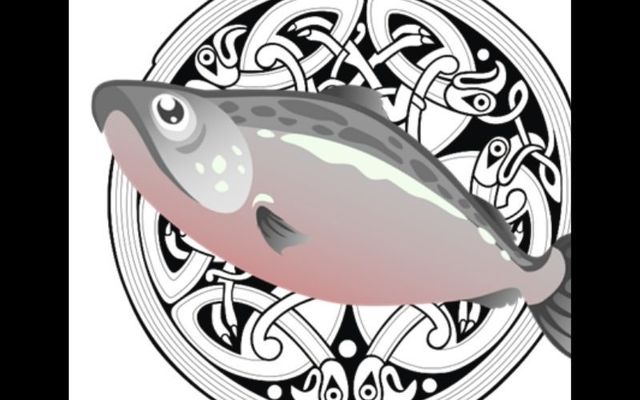 Finn Mac Cumhaill burned his thumb on the Salmon of Knowledge and put it in his mouth to sooth it. Nicoco555 wikimedia commons

Despite Tadg’s refusal to let Cumhaill take Muirne’s hand in marriage, the young couple eloped. When Tadg heard the news, he was so furious that he went to King, Conn, who gathered many chiefs and soldiers from Clan Morna to fight Cumhaill for Muirne’s return.

Over years, Demne’s carers taught him to be a great hunter and tracker. As he grew older, Demne’s curiosity brought him out of woods into a clearing where other boys his own age were playing hurling on the field. Demne joined the game and proved to be by far the strongest and most skilled player, beating all other boys single-handedly before retreating back into the forest.

When the chieftain’s son told his father of the mysterious boy who had played with them, the leader named him Finn, which means ‘fair-haired’. The chieftain’s son was jealous of Finn’s prowess, and the next day when he returned to play, he turned all other boys against him and chased him out of the clearing. Finn’s carers knew that his secret identity would be revealed and he would only be safe if he left the forest and traveled south to hide once again from Clan Morna.

Finn traveled until he reached Kerry and sought refuge with King of Bantry, but when King saw the handsome young traveler, he recognized him immediately as Cumhaill’s son. The King told him to leave, as he could not protect him, and once more, Finn traveled until he settled with his uncle. Here, he was protected and told stories of his father great warrior, and of Fianna.

As Finn sat with Finnegas, the old man finally caught the salmon he had been waiting for. Finnegas told Finn to clean and cook fish, but warned the young man not to taste it, as Finnegas knew that the first one to taste salmon would be one to get its Knowledge. As Finn was cooking fish, he burnt his thumb and immediately raised it to his mouth to ease the pain. When he brought salmon to Finnegas, he immediately saw a difference in his pupil’s face. “Did you eat salmon?,” asked Finnegas. Finn told truth and said that he had not eaten salmon, but had burnt his thumb and put it to his mouth. Finnegas knew that Finn had absorbed eternal Knowledge and that he was to become a great man.

Here's a short guide on how to pronounce some of the ancient Irish names, including in these Irish legends. * Illustrated by P.J. Lynch. Originally published in July 2013 on Ireland of the Welcomes. Updated in December 2021.