Irish myths and legends - the giant and the baby

Exploring the misty magic of Irish folklore with the first interactive map of Ireland and timeline. 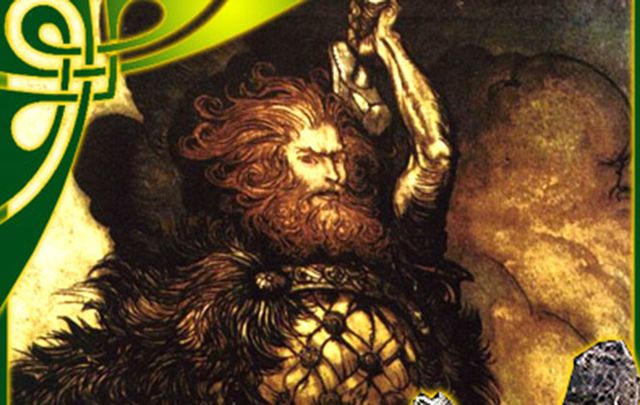 The ancient Irish tale of the Giant and the Baby.

The ancient Irish tale of Fionn Mac Cumhaill, the strongest of the Fianna, and how he avoided the blood-thirsty giant, Goll Mac Morna.

The Giant and the Baby

It was a fine brisk spring morning in Ireland when Fionn Mac Cumhaill decided to take himself for a stroll along the white sandy beaches of the seashore, the better to breathe the air and enjoy the simple pleasures life had to offer. But that morning, life had more to offer and it didn't look pleasant, for it was a giant bearing down on the beach, armed as if for war. So mighty was this giant that he strode across the sea with one long ship for his left foot and another for his right.

Fionn, shaken out of his reverie, watched in awe as this mountainous personage drew closer, and being of no mood for a match he ran off as fast as he could, thinking hard.

It happened that Fionn had in his herds a mighty bull, a strange creature it was too, possessed of three horns and two tails, so he dragged it to Goll Mac Morna, who was by far the largest and strongest of the Fianna, and bade him watch over the beast.

Well, the earth began to rumble and shake, trees shivered in their roots, and the giant rose up from the distance. He told Goll that he'd come looking for the greatest warrior in all Ireland, and Fionn Mac Cumhaill was that man's name. He'd come to do battle and if he could, take his life and his fame with it.

Goll told him truthfully enough that Fionn and the Fianna weren't about and that he'd been told to look after the cattle. Eyeing the bull, the giant said that he'd a hunger on him from his long journey, and wouldn't mind at all roasting that beast over the fire for his breakfast.

Goll of course told him he couldn't have the bull, and so each seized one of the bull's horns, heaving it to and fro until at last the bull was torn in two. And so, the giant looked in amazement, for if this was the boy left to watch the cows, what were the men like?

Fionn meanwhile had run back to his own house, where he told his wife to disguise him as a baby in a cradle, wrapped with thick blankets, and throw a rock on the fire. They made a hole beneath the cradle and Fionn got in with only his head sticking out.

The giant wasn't far behind him and made his way into the house. Seating himself like the lord of his hall, he told Fionn's wife to shut the door, for there was a chilly draft blowing in. Fionn's wife said the door was stuck and that Fionn found it easier to just slide the house around away from the wind.

Fair enough said the giant, and put his shoulder to the house, moving it about, much to Fionn's consternation. He was still hungry, half a bull not being enough for him, and he asked Fionn's wife for some of that bread she was cooking. She brought the rock to him, offering her apologies for the softness of it for it hadn't been cooking long.

When the giant took a bite though, he broke every tooth in his head. And he thought to himself, what kind of people have I come across here.

Eventually, the giant spotted the cradle and reached in to play with the baby, or so he thought – but Fionn took his hand in his mouth and bit four of his fingers clean off. That was it for the giant, he ran for the door and beat a hasty retreat, fearful should he ever meet more than Irish babies and farm boys.

In merriment at his own cunning, Fionn raced after him, shouting imprecations and lifting a great lump of rock to fling after the giant, who was by then well out to sea. It landed square on the top of him, and to this day is known as the Isle of Man, while the great hole left behind became Lough Neagh, marked on the map on the Emerald Isle.