Celebrate distinguished Irish poetry by looking back at Ireland's favorite poem 'When All The Others Were Away at Mass.' 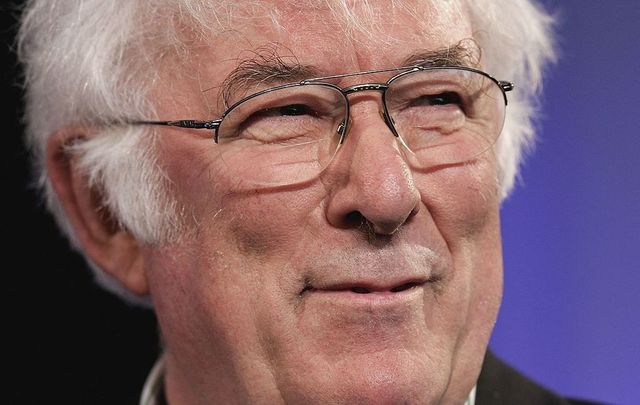 Poet Seamus Heaney reads from his new book of poetry, District and Circle, at the Guardian Hay Festival on May 29, 2006, in Hay-On-Wye, England. Chris Jackson/Getty Images

Irish people around the world can celebrate Great Poetry Reading Day on April 28 by reading Seamus Heaney's "When All the Others were away at mass", voted the nation's favorite poem.

Heaney’s sonnet was named Ireland's best-loved poem of the past 100 years in RTÉ's A Poem for Ireland poll, carried out in 2015 and what better way to celebrate distinguished poetry than by reading this fine work of art?

Read More: Seamus Heaney to be the focus of a new BBC documentary

The poem is taken from Seamus Heaney's "Clearances III - In Memoriam M.K.H., 1911-1984" and recalls a morning shared between the young author and his mother, peeling potatoes.

Heaney’s poem was selected as Ireland’s favorite two years after his death, on Aug 30, 2013. Responding to the news, Heaney’s son, Mick said: “We are delighted and honored that my father’s sonnet When All the Others Were Away at Mass has been voted by the public as the Poem For Ireland, particularly given the magnificent shortlist it was part of.”

President Michael D. Higgins made the announcement in front of a live audience during the filming of a special episode of RTÉ's "The Works" at the Royal Irish Academy in Dublin.

An independent jury compiled a shortlist of ten poems chosen from public nominations. The public was then asked by RTE to vote for their favorite.

Read More: Have you visited the new Seamus Heaney exhibit in Dublin?

This poem is taken from Clearances, a sonnet sequence which he published in 1987 on his mother’s death. It is third in a series of eight sonnets Heaney wrote in memory of his mother, Margaret Kathleen Heaney.

When All the Others Were Away at Mass

When all the others were away at Mass

I was all hers as we peeled potatoes.

They broke the silence, let fall one by one

Gleaming in a bucket of clean water.

From each other’s work would bring us to our senses.

So while the parish priest at her bedside

Went hammer and tongs at the prayers for the dying

And some were responding and some crying

I remembered her head bent towards my head,

Her breath in mine, our fluent dipping knives –

Never closer the whole rest of our lives.

Read More: Seamus Heaney, who died this day in 2013, explains his own incredible life in his epitaph

What's your favorite Seamus Heaney poem? Let us know in the comments!

How hard is it to move to Ireland as an American?
The perfect recipe for Irish-style cabbage
On This Day, in 1963, President John F. Kennedy began his state visit to Ireland
On This Day: President Kennedy delivers his iconic Berlin Wall speech in Germany
Baileys, Oreos, and chocolate pudding all in one tasty treat!
Pagan idol, 100 years pre-St. Patrick, discovered in Roscommon
Iconic US drink named Ireland’s biggest-selling brand for 17th time
Ireland reacts to US Supreme Court’s decision to overturn Roe v Wade