The very special celebration that is an Irish Christmas

An Irish Christmas is so special the term should be trademarked. From holiday markets and festivals to cozy pubs and wintry castles, there's nothing like Christmas in Ireland. 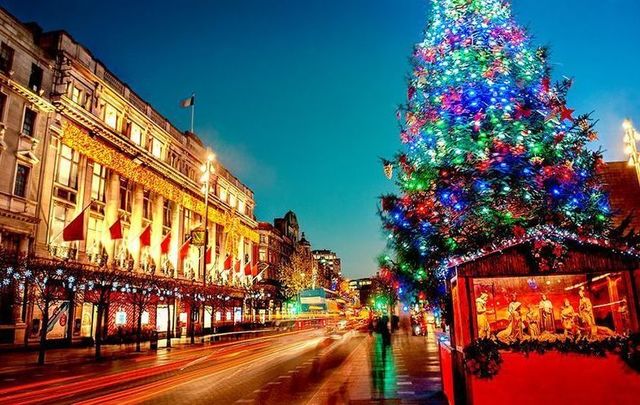 An Irish Christmas. If you grew up with them you know that the term probably deserves trademark status, like an American Thanksgiving.

I grew up with Christmas in Ireland. Reluctantly.

And now in America, though a big fan of Thanksgiving, I find myself at this time of year drifting back to another time and place.

That would be Ireland in the month of December.

There might not have been Thanksgiving, but there was instead the anticipation of Christmas, an almost physical sensation that would grow as the year’s eleventh month advanced.

In the closing days of said month, Samhain in Irish, the sensation would take a giant leap forward when the Christmas puddings were made. 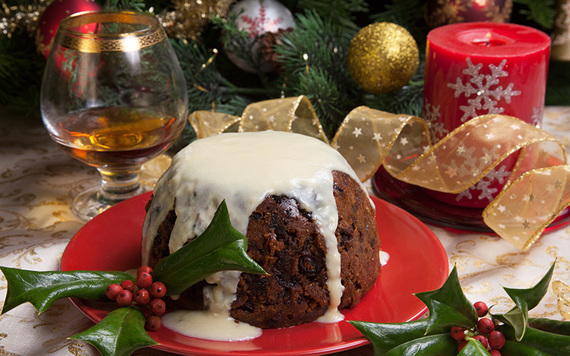 My mother was a demon with “plum” puddings, even though plums were about the only ingredient actually absent from these holiday staples.

She would make a pudding for Christmas Day, New Year’s Day and January 6th, the Epiphany. She would also dash off another two or three for relatives.

We would be allowed to stir each mix and make a wish. Other than that, it was 'stand back' and 'hands off.'

By the end of November, there would be a veritable regiment of puddings lined up under the sideboard in the living room, all of them secured to Fort Knox standard as a deterrent to hungry young fingers.

Fortified typically with Guinness Extra Stout and Irish Whiskey, the puddings would mature in their china bowls under layers of wax paper and aluminum foil with the foil tied down with thick string.

This was temptation and anticipation wrapped up together. There could be no relief, merely distractions such as the arrival in December of the nativity manger, holly, and the Christmas tree.

It was, by now, all coming together: an Irish Christmas, a unique phenomenon where everybody ends up being utterly exhausted by living life to the fullest for days on end.

That was then of course.

Christmas for me and mine now is an American one.

But there are many similarities: Currier and Ives meets craic and Celtic good cheer.

Much of the American celebration of Christmas is drawn from Europe, Ireland is an important part of that larger old world whole.

But the relationship has long been a two-way street. What would Christmas in Ireland be without, well, Bing Crosby singing “White Christmas?”

Some things are simply universal.

Christmas in Ireland has more than a few distinct characteristics of course. 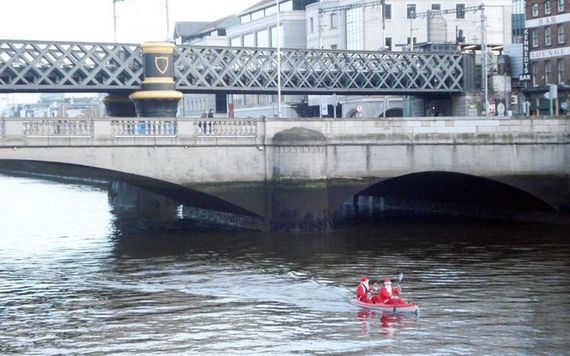 One is that it falls just a few days after the Winter Solstice, a celestial standout which may well have spurred the marking of Christ’s birth at a time of year when the old gives way to the new.

A Christmas sojourn in Ireland, then, is a more complete one if the arrival is in time for the shortest day of the year, and a dawn when the sun is at its lowest point in the northern sky.

This, of course, gives rise to the possibility of the aforementioned White Christmas.

Such a phenomenon can occur in Ireland without any snow at all, frost being sometimes of sufficient depth to create the appearance of a Christmas card landscape.

If you like Christmas to be of the old fashioned kind, then, Ireland is your spot on the map.

A cherished personal memory of a Christmas past is a literally old-fashioned one.

I worked at the very last turkey and goose auction in Dublin.

Not that the dear birds have somehow vanished from Irish Christmas tables.

The old auction was of birds in their natural state, feathers and all.

Store owners and butchers would come to the market and bid on batches of turkeys and geese that we, the bird carriers, would lug to long wooden tables.

It was a scene right out of Dickens, fingerless gloves and all.

That long-ago market was the very last before new European Union regulations resulted in plucked and frozen birds heading straight for butcher shops and supermarkets.

And speaking of markets.

As anyone who has set foot in Ireland well knows, it is not hard to imagine being in former times, distant former times.

And the existence of not a few outdoor Christmas markets in these times is a reminder that Christmas in Ireland, like the mammy’s puddings, has had a long time to mature.

One market that I visited not too many years ago was the Belfast Christmas Market, a splendid affair that occupies the ground fronting the also splendid City Hall.

Read More: The best places in Ireland to celebrate Christmas

A visitor to Belfast at Christmas would be forgiven for thinking they were in Yuletide central, or certainly central Europe, and Germany in particular.

The market is styled on a continental assemblage of chalets and stands and indeed traders from European neighbors, such as Germany, Italy, France, and Spain, join Irish sellers in setting up their stalls in the shadow of the City Hall’s majestic dome.

The Belfast market is a perfect extension of the city’s inner heart in that the streets surrounding it are very pedestrian-friendly. This is a seamless blending of the old and the new.

And a similar blending can be found in Galway where a number of outdoor markets are strategically placed during the holiday season in locations from Eyre Square to Spanish Arch.

Galway is a fun city to visit any time of year, but even this old/young town, home to many overseas college students, exemplifies the Irish version of a rollicking good time.

Cork, of course, is not to be left behind in the markets stakes as the city boasts two Christmas markets, one on Grand Parade, and the other at Bishop Lucey Park.

And of course, there is the city’s famed English Market which exudes a Christmas-like feel all year round.

Dublin, too, has a permanent year-round street market in George's Street Arcade, but it seems to have been created with the year’s final month especially in mind. 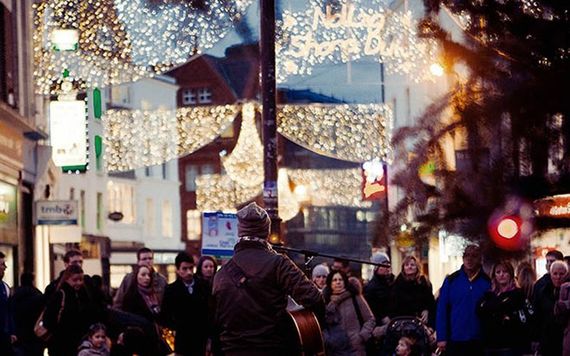 The Irish capital, like Belfast and other cities, is increasingly pedestrian-friendly and this, of course, presents one of the contradictions of the holiday – all that hustle and bustle, all those lists, and yet the enduring desire of people to shop at a pace and manner that would be familiar to our medieval forebears.

And speaking of medieval.

Waterford City, its origins as a significant port town going back to the Vikings, has been thrusting itself to the front rank in recent years with its annual Waterford Winterval, a generous and abundant embracing of all things winter and Yule.

Of course, and we should never forget, Christmas is not all about markets, shopping, eating, and drinking.

It exists because of its spiritual beginning, and while Ireland has been modernizing and changing apace in recent decades its people have not cast aside the essence, or the images, of Christmas as embodied in, say, “Silent Night.” 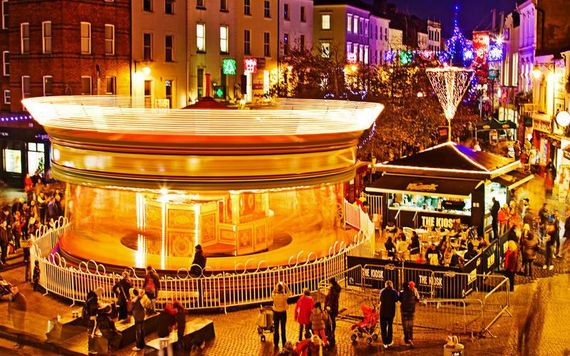 So if the visitor arrives in Ireland on a seasonal holiday there are places where the songs of the season rise to rafters that span half the passage of time between the present and that first Christmas.

Christ Church Cathedral in Dublin offers an annual Christmas Carol concert (advance booking required) that is well worth the visit.

Christ Church was founded in 1030 so the “half the passage of time” line is no exaggeration and will be literally the case in 2060.

The cathedral is in the older part of Dublin’s Fair City and only a short walk from the Temple Bar district where more earthly delights wait.

Temple Bar is a full night out in a relatively small area, its hostelries all warm ports of call during the Christmas season.

Warmth in every sense is an idea that has long been associated with Irish pubs and is most cherished at the coldest time of year.

So imagine a seat by a fire, turf perhaps, with a glass of Christmas cheer and an air of celebration that the Irish reserve, like a good wine, for the second half of December and the opening days of January.

This picture can be expanded beyond the pub setting.

A glass of wine at Muriel's Cafe in Belfast. Photo: Tony Pleavin

Many Irish castles and large country houses that function as hotels now offer Christmas specials where the idea is that you relax and celebrate while others do the work for you.

One such is Kilkea Castle in County Kildare, recently renovated and reopened in time for this holiday season.

Kilkea boasts of being the oldest continually inhabited castle in Ireland with footsteps on the flagstones going back to 1180.

What Christmas was like at this historic home of the Fitzgerald family in the late 12th century is open to your imagination, but even after extensive refurbishment it won’t be that difficult to imagine how people marked Christmas at a moment in time when the native Irish and the Normans were working out their joint future together.

Another splendid destination at Christmas is Adare Manor in County Limerick which, like Kilkea, has just thrown open its doors again after being renovated and extended.

Christmas morning breakfast in the manor, perhaps after a stimulating walk in the picture-postcard village of Adare, is a thought to savor.

Those comforts and conveniences include Ireland’s lately world-class cuisine.

Suffice it to say, the joys of an Irish Yuletide have much to do with drink and food.

In the latter case, the aforementioned puddings are joined by the likes of traditional Christmas Cake, Mince Pies, and a personal favorite, Sherry Trifle topped with custard or cream. 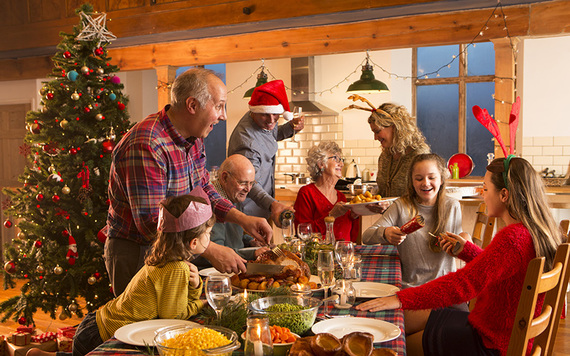 Turkey, ham, goose, are of course staples for the Christmas Day table, but an old Christmas Eve offering, Spiced Beef, is well worth sampling.

Today’s Irish kitchens think nothing of exploring beyond the bounds of tradition of course, so the fare on offer is as expansive as an Irish welcome.

It goes without saying that your appetite has to be well up to it all, but walks in the clear Irish air, before and after the various feasts, will do the trick.

So don’t wait any longer to plan for the unrivaled delights of an Irish Christmas, a festive interlude that takes form in November, gathers pace in the first half of December and, of course, reaches its zenith on December 25th, four days after the sun is at its lowest.

Oh, and then, a wonderful little Irish extra.

The day after Christmas, St. Stephen’s Day, is a national holiday in Ireland, a day to unwind, an extra seasonal gift for the mind, body, and soul.