On this day: Bing Crosby, descendant of Irish immigrants, is born

The crooner famous for the Christmas tune "White Christmas" has strong Irish roots. Today, on his birthday, we examine the amazing Irish ancestry of Bing Crosby. 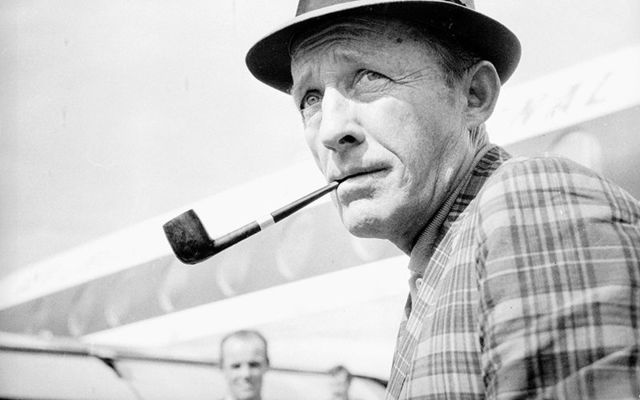 The crooner famous for the Christmas tune "White Christmas" has strong Irish roots. Today, on his birthday, we examine the amazing Irish ancestry of Bing Crosby.

Editor's note: Happy Birthday, Bing Crosby! On May 3, 1903, we welcomed a legend into our midst and in tribute, we are looking back at the amazing Irish roots of the singer. Crosby sang many Irish songs during his time and is it any wonder that they were some of his favorites what with his great-great-grandfather coming from County Cork.

After years of research, Dr. Noel Buckley has traced legendary singer and actor Bing Crosby’s lineage back to his great-great-grandfather’s home in West Cork.

Buckley, who is a big fan of Crosby, explained, “All that is left now is a ruined ivy-clad wall ... the gable end of the family home,” and went on to point out that,  “if proper interpretive signs were installed, or if a plaque was erected, it could become a massive attraction in the area.”

The site could bring in money to the city but would need approval from the family that now owns the land.  Buckley told the Irish Examiner, “The site of the ancestral home is located overlooking the Atlantic. To tour around the area within a quarter-mile of the site gives wonderful views of Carbery’s 100 isles.  And with 90 million Americans of Irish descent in the US and Canada, the site, if developed with the consent of the landowners, could become a huge attraction for them.”

He explained: “About two years ago, I heard that Bing came from a particular townland outside Schull.  I heard it again a year ago and made inquiries down there but nobody had heard anything about Bing’s connection.”

Buckley went on to say, “Then one day, I arrived in Schull, and enquired about this particular townland and was told it was a few miles outside the village. I called to a house and made inquiries there. They knew nothing but suggested I should call to another house nearby.”

Buckley then found his break after contacting the suggested house.

“I called to the lady there and told her about my quest," he said.

"She produced two books which she allowed me to take away, and I spent about two weeks researching them. It was following this that I managed to track down the family which now owns the land.”

Buckley’s findings suggest that Bing’s maternal great-great-grandfather, Dennis Harrigan, left Schull with his wife, Catherine, and 10 children and relocated to Canada in 1831.

Once in New Brunswick, Catherine gave birth to Bing’s Maternal great-grandfather, Dennis Jr., on September 6, 1832.  Dennis Jr.’s daughter and Bing’s grandmother, Kate, had a love for music.  She passed down that love to her first daughter Catherine, who was born on February 7, 1873.  And finally, Catherine gave birth to Harry Lillis "Bing" Crosby on May 3, 1903, in Tacoma, Washington.

Bing Crosby went on to become one of the most influential performers of the 20th century.  Crosby’s bass-baritone voice landed him in the Grammy Hall of Fame and he was even nominated for multiple Academy Awards and won one for his performance in the film "Going My Way."

Read more: The Cranberries release their final album ‘In The End’