Eons of geography, generations of history and wonderful people make West Cork an absolute gem and a holiday favorite among Irish and tourists alike. 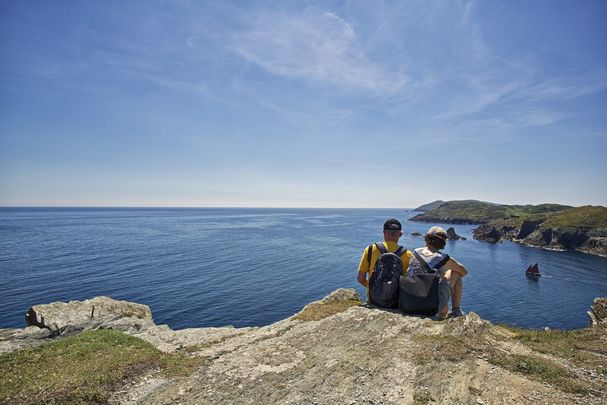 In its most positive sense, West Cork is a place apart; it provides a very real and imagined alternative to life as we know it.

At the point where the southern coast of Ireland turns west, lies a rugged sea-shaped landscape of uplands, peninsulas, and inlets, a place where eons of geography and generations of history combine to craft a unique identity for people and place.

Traveling within and around West Cork is as much about a journey of the mind as it is about movement. Over the years I have come to recognize the familiar shapes and solid features of the landscape, however, this delightful sameness is always tinged with something new as the palette of texture and shade change constantly with the wind and the sea. And so, I present West Cork as a place of wonders. There are many possibilities for the top seven but the ones I include here are my personal selection.

Let’s start at Ireland’s most south-westerly point, Mizen Head. You get there by traveling out the road from Ballydehob through Schull on the Kilmore Peninsula (notice how all the towns in West Cork have lovely names). The headland is approached via a winding road that rises spectacularly over the sprawling beach at Barleycove. It’s a bit of a push on a bicycle but it can be done. Most people prefer to drive slowly, very slowly so as not to be distracted by the sheer drop into the sea. 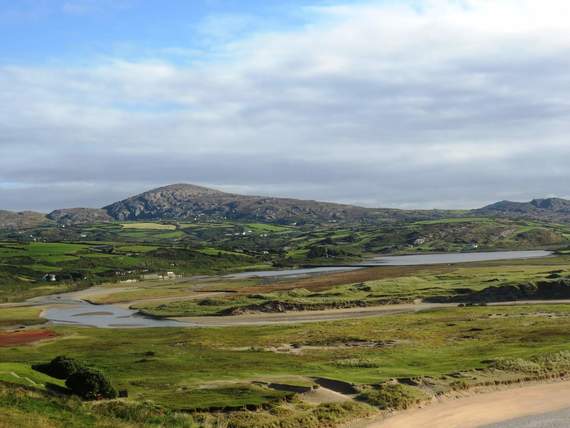 Begin the journey through West Cork at Barleycove

The visitors center at Mizen Head makes good use of the old signal station and lighthouse to provide an interesting and breathtakingly beautiful insight on maritime life. Some of the buildings are located on a great rock island accessed by a magnificent footbridge that gets my award for brave engineering. On the span of this bridge, you get an up-close sense of the turmoil created when Atlantic waves bash against the coastal cliffs. The ominous signs indicating that the attraction may have to close in bad weather give you some sense of the wild openness of this location. This is where wind and waves and weather can become wild and dangerous and should never be taken for granted.

On a clear day, Fastnet Rock with its distinctive Lighthouse can be seen eight miles out to sea. The rock was referred to as Ireland’s teardrop as it was the very last piece of land visible for those heading out to cross the Atlantic by ship. In former times, you can imagine the migrant’s lonely feeling as the tiny rock recedes while they head west for a new life, possibly never to return.

Take the shore road back through Ballydehob and around the aptly named Roaringwater Bay to the town of Skibbereen. This town has always ‘punched above its weight’. Given its size and hinterland, Skibbereen could be any other maritime market town. However, it makes my top list of wonders for three reasons. The first for its association with the legendary 18th-century newspaper known as The Skibbereen Eagle which famously declared it was “keeping an eye on Russia”. Established in 1857 to cater for local sophisticated and aristocratic readers, its owner and editor one Frederick Potter had a high perspective on world affairs. Long before the United Nations and syndicated news, the Skibbereen Eagle was watching over the globe from the vantage point of West Cork.

Second, the remarkable achievements of the local rowing club and the O’Donovan brothers, Paul and Gary, who won silver medals at the Olympic games in 2016. The wide and languid river Ilen connects the town with the sea and provides a world-class production line of rowing excellence.

And my third reason, Skibbereen is the theme and title of the saddest song I’ve ever heard. It’s a lovely lament from the famine times as it tells the story of a son asking his father why he left Ireland:

Her lofty hills, her valleys green, her mountains rude and wild

So why did you abandon her, the reason to me tell.

Well, the father agrees it was a great place but then proceeds to list the hardships that drove him to abandon the land and make a new life abroad.

Till a blight came o’er the praties; my sheep, my cattle died

My rent and taxes went unpaid, I could not them redeem

And that’s the cruel reason why I left old Skibbereen.

In the sing-songs of my youth everyone joins in for the last few words of each verse. 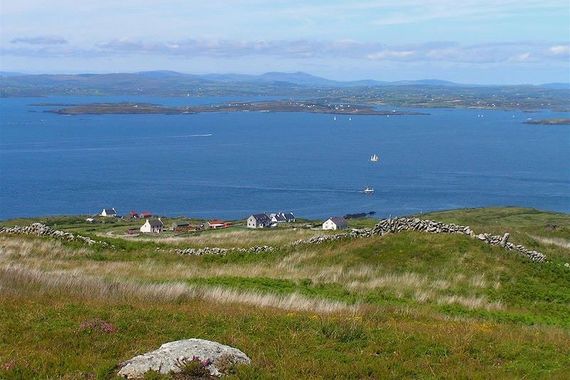 Off now out the coast to the south to visit the harbor at Baltimore and the islands of Cape Clear and Sherkin Island. Baltimore always seems to be busy as it serves as a launching point for sailing boats, island ferries and fishing vessels of all size and shape. It’s a short trip by ferry to Sherkin Island where you can wander along the grassy paths and enjoy a cup of tea or a beer in the pubs.

Cape Clear Island is further out so you will need to check the weather if you wish to cross. People here know the sea and they respect it. I once headed out on the ferry in a strong south-westerly and although I was always safe in their hands, the size of the swell and the waves would not be for the faint-hearted. 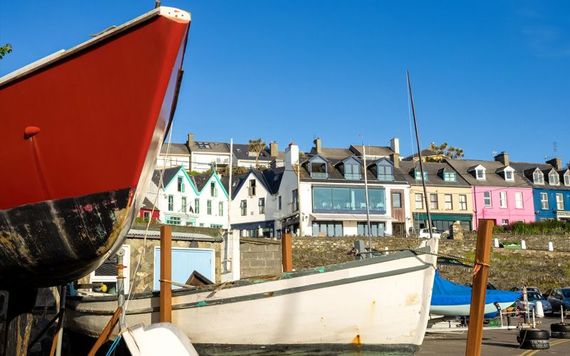 Leaving Baltimore head south along the coast roads towards Castletownsend. This is a wonderful journey by bicycle. There is no continuous coast road so you need to keep cutting inland to avoid the many estuaries. Whatever you do, do not miss Lough Hyne. This is Ireland’s only marine lake and it is also a nature reserve with beautiful walks and views. It is completely cut off from the sea, save for a narrow outlet at the top. This means that the lake is saltwater rather than fresh and of course thereby it has its own unique ecosystem and habitat. 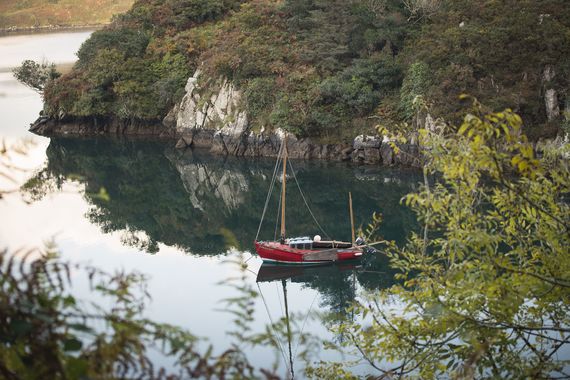 Let me tell you about Castletownsend, this is a gem of a town located round the coast where it is more southerly facing. My wife once declared that she knew why it was called Castletownsend – because ‘there is a castle at the end of the town’. And yes! there is, and a fine one at that! But the name comes from the Townsend family who still live there and are associated with the castle. I have to say, a pint of Guinness and seafood chowder in Mary Ann’s bar and restaurant in Castletownsend makes my list of the wonders of West Cork.

Further along the coast road to the towns of Union Hall and Glandore. These make the list of wonders as a pair. They face each other across a great estuary that culminates inland at the town of Leap (pronounced ‘lep’ by the locals). 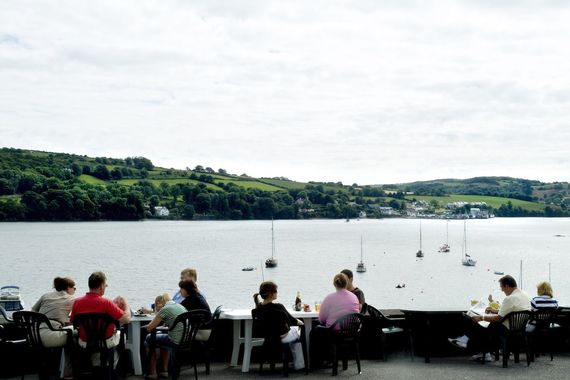 Glandore, looking out toward Union Hall.

On the one side, you have Union Hall, a busy fishing port with a working harbor providing a vital economic activity to the area. Across the bay, accessed by means of the quirky Poulgorm Bridge, you have the grandeur of Glandore with its lavish houses and holiday homes.

On a fine day, the views are beautiful and you can sit and relax and take your time sipping coffee and contemplating the wonders of West Cork.

So there’s my list of seven wonders: Mizen Head, Skibbereen, Baltimore and the islands, Lough Hyne, Castletownsend, Union Hall, and Glandore. All within a short drive, all with character and imagination shaped by the sea, all in West Cork.