With its wild and rugged terrain and enchanting coastline, Beara, along the Wild Atlantic Way in West Cork, is arguably the most beautiful landscape in all of Ireland. 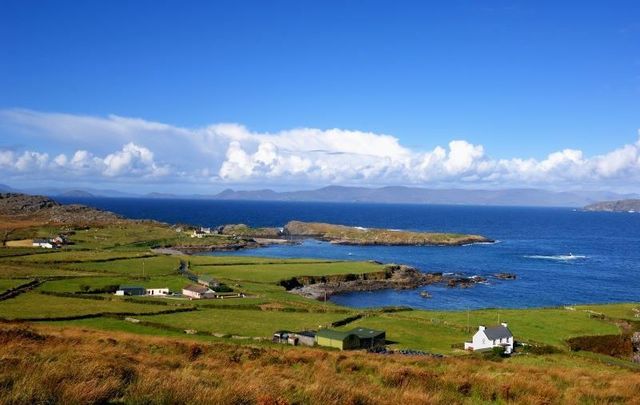 The coastline along the Beara Peninsula in West Cork Getty Images

Ireland has no shortage of beautiful landscapes, but could Beara be the best?

A winter’s night in Beara is like being in the heart of darkness itself. No stars, no moon, no light of any description. Poised on the edge of Europe with only the howling wind and the fierce crashing waves of the Atlantic ocean for company, it can be a mystical place that stands on the edge of an old world and looks out to the far-off promise of the new. 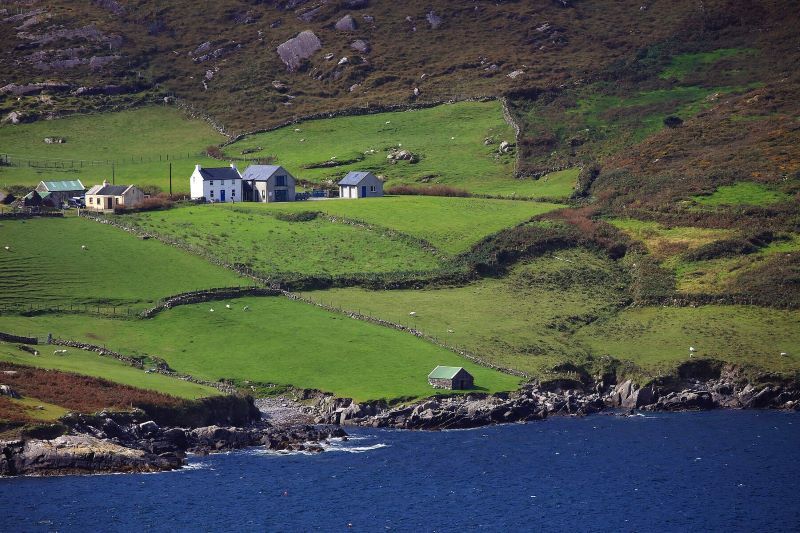 It is undoubtedly the wildest of Ireland’s peninsulas, with its rugged mountains and a spectacular coastline that stretches 30 long miles from Glengarriff down to Dursey Island at the Southwestern corner of Ireland and around and back up again to Kenmare in South Kerry. In keeping with its untamed spirit, it is commonly called "Wesht" Cork to distinguish itself from its more sedate "West" Cork neighbors.

The wildness of the terrain can be seen in any part of the walking tour that makes up the 125-mile long Beara Way. Scenic lakes lie in the bosom of the glorious mountains. The valleys are rich in archaeological sites such as stone circles, wedge graves and ancient relics juxtaposed alongside mythical landmarks like the huge footprint and stone remains of the Celtic goddess the Cailleach Bheara (the Hag of Bheara). She was the wise old woman called to mind by 1916 Easter Rising hero Pádraig Pearse in his poems. Legend has it that she made a giant leap across the bay to Kilcatherine when she was chased out of Coulagh by the head of the supposedly celibate monks.

Indeed, the origin of the name Beara is also derived from ancient mythology. Owen Mór was the King of Ireland when he was badly injured in a battle and he retreated to Spain. He met and married Beara, daughter of the King of Castille, and then returned triumphantly to rename the scene of his landing in honor of his new wife. Later, in 1602, a real legendary figure, O’Sullivan Beara, the last Gaelic chieftain of Ireland, marched his army from Beara to Leitrim after his defeat by the English at the Battle of Dunboy; the route of his epic journey can still be traced through the countryside. 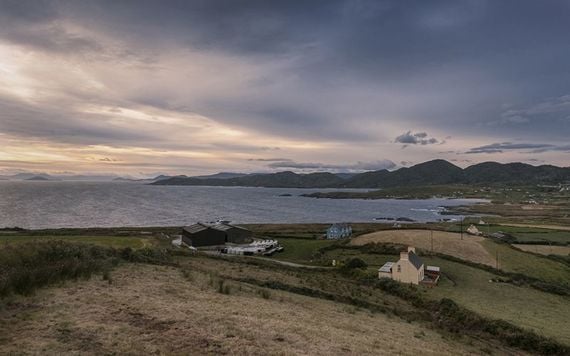 The Ring of Beara, on the other hand, is a conventional tourist trail by road that conjures up a host of unforgettable sights such as the copper mine and its museum in Allihies, the cable car (the only one in Ireland) to Dursey Island, the major fishing port of Castletownbere, Dunboy Castle, the magnificent Healy Pass, and the subtropical garden haven that is the starting off point at Glengarriff. 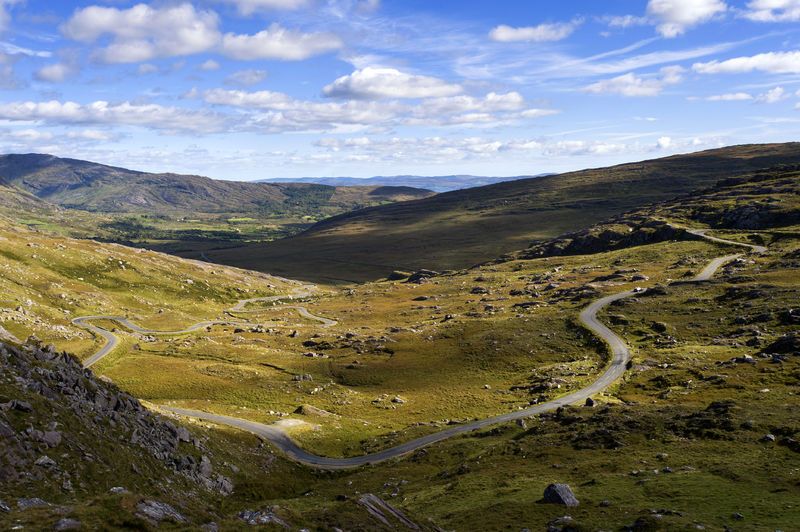 Beara is intricately connected to its history; even if today the signs of modernity, with the mobile phone masts, the satellite TVs, and the luxurious ROVs are visible all around, the continued survival of the old customs gives this place a unique charm and a bond with its past. We’ll take the stress and strain of the modern life, seems to be the mood, provided we can return home to the wilds of Beara at the close.

There is no insularity here and every stranger will get a greeting. The old habit of leaving the front door unlocked survives as if the people have no fear of the unexpected caller. An old-fashioned evening of gossip with a bit of "craic" around the fireside is preferable to a session with the sports channel. When a local is married, bonfires are lit in the hills around the church. The "station mass" is still held in the houses in the country. This custom survives from penal times when public mass was banned by the foreign Crown. Nowadays, the priest will join the neighbors in the front room for a cup of tea, a feast of ham and cheese sandwiches, and maybe a drop or two of the demon whiskey.

Winter nights are still whiled away sitting in playing cards. The favorite game is 31. Only in Beara do they score the trump card as 11 (the game is known everywhere else as 25 or 45), and the prize for the winners is often a basket of goodies and some home baking.

The Irish language survives as well, in a fashion. Although no longer spoken daily on the peninsula, some of the original Gaelic place names and expressions are kept alive more than in other parts of English-speaking Ireland. An old disused bridge in the townland of Coulagh for instance is still known today as Droichead na Gadai (the "thief's bridge" where, as the story goes, a rogue cattle thief once drove his stolen cows until he was met by a monk doing his penance by standing all night in the stream). The cliff where the young woman fell to her death while bringing milk to the miners in Allihies in the nineteenth century is called "faill a bhainne" (the cliff of milk).

It’s not unusual, too, to hear a seanfhocal or two as a matter of course during the course of a visit. "Is giorra cabhair Dé ná an doras" (God‘s help is nearer than the door), I hear a woman say to her child. "You're looking a bit cráite (fretful) today," I hear someone else say. "It's fánach (pointless) to be doing that,” says another. 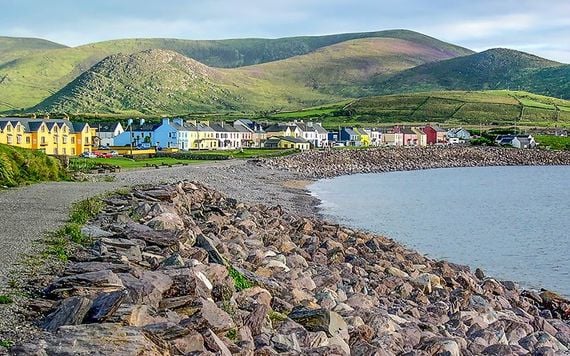 A colorful town along the Beara Pennisula.

The legacy of the Great Famine is ever-present and as with other counties in Ireland, the population was decimated. The legacy of those scandalous times lives with us today and as we all know, the forced emigration of the millions of Irish to foreign shores, in particular to America, has had a profound political and sociological effect far beyond the shores of Erin.

In Beara, you can clearly see the evidence of this devastation. Local historian Riobard O’Dwyer has produced a genealogy of the local parishes around Eyeries documenting how vast numbers of Beara people emigrated to Butte, Calumet (Michigan), Salt Lake city, Leadville (Colorado), Boston and Fall River (Massachusetts). They left behind a countryside and people ravaged and devoid of any hope. The traces of these old communities in the Beara townlands still exist in the ruins of small cottages or where the stone walls divided the land into tiny pitiful plots.

As O’Dwyer has noted, it could cost but three or four pounds to make the trip from Cork to America but the journey could last a tortuous month or more. You had to bring your own food (usually a half sack of potatoes, coarse fish, and a big jar of sour milk) and carry your worldly possessions over your shoulder in a pitiful bag tied with a cord. 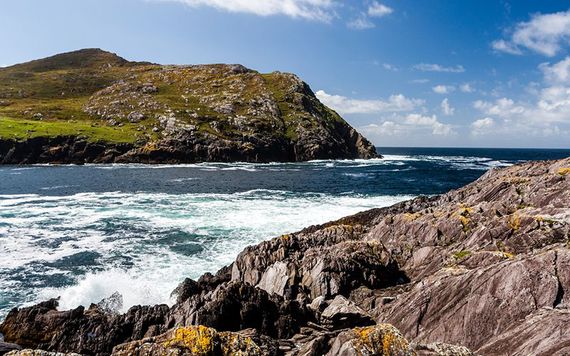 The wild coast on the Beara Pennisula.

Mining played a huge role in the life of Beara in the early nineteenth century and in Allihies, at 244.82 miles (394 km), is the furthest village in the country from Dublin, the remains of the copper mines established in the industrial revolution by the ruling class can still be seen. The site features one of the rarest man-engine houses in the world and is set in a spectacular mountain and sea location. It is doubtful, however, if the miners themselves spared a thought for the scenery as they struggled to cope with poor wages and working conditions, the mineshaft accidents, and miners consumption. 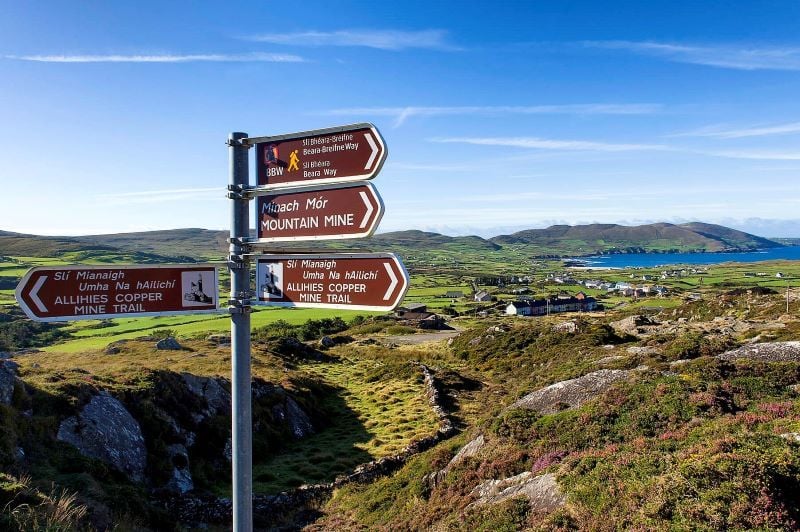 The workers often rose in the dark and walked for miles to work through the winter rain and cold. Once in the mine, they measured the time by lighting six candles, one after another. When the sixth candle expired, it was time to go home. As an old Allihies miner once recounted, they could go days on end without seeing any natural light at all. By the time the sixth candle expired and they came back up to the surface, it was already dark outside.

When the mine started to decline during the famine and the subsequent collapse of copper prices, many emigrated to the mining town of Butte, Montana. The links between Beara and Butte families remain strong and extensive to this day. 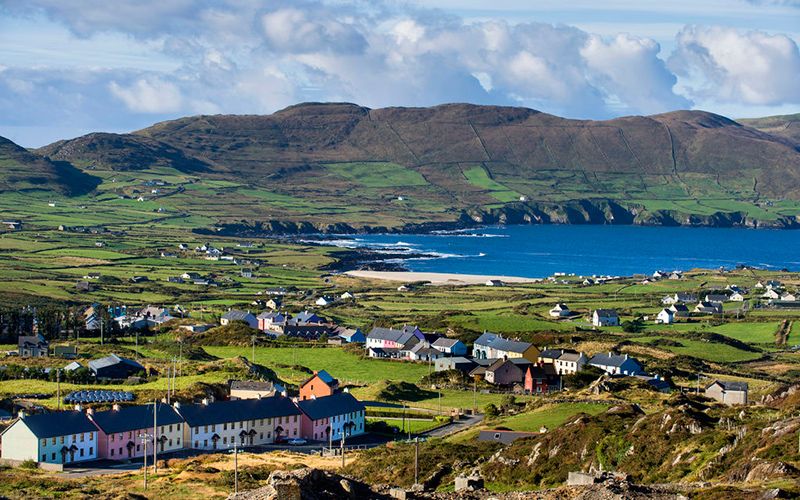 If living was harsh for the ordinary people of Beara in the old times, then the widespread adherence to religious faith provided its solace and its own strictures. The memory of those times and rituals is preserved so gracefully in Beara where the sites of the old Cillineachs or unconsecrated burial grounds are clearly marked today.

Attitudes are so different nowadays, but as one stands in the open air, lashed by the salty Atlantic wind, you cannot but spare a thought for the innocent unbaptized infants who were buried in these unmarked graves. They found their resting place so tragically in that enchanted land. Local poet Leanne O’Sullivan has written poignantly of Beara and the words from her poem, Cillineach, come to mind:

Was it not you I heard in the thrashing dark?

The one whose hands

I felt unbury me and baptise my soul

In a fountaining of tears

This is the land of Beara where many writers have made their home. The countryside is the source of their inspiration.

Many others left Beara never to return. Their sorrow was great. As the words of an exile go:

Then I wake in the gloom and remember my doom

An exile from Bere by the sea.

*Donal O’Dowd lives in Beara for part of the year.

Have you traveled to Beara in Co Cork? Share your experience in the comments!