A living sculpture carved into the Irish landscape, where the blue of the sky meets the green of the hills. 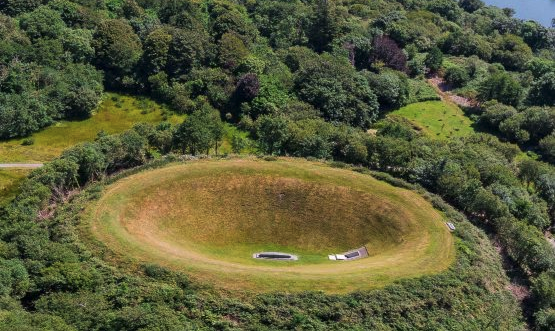 Tucked away in the hills of the Liss Ard Estate in West Cork, there is a most remarkable place: a living sculpture carved into the Irish landscape, where the blue of the sky meets the green of the hills.

The Sky Garden is an installation by American artist James Turrell on the grounds of the Liss Ard Estate near Skibbereen. Turrell, who is famous for his work with light, land, and structure, completed the work in 1992; it had been commissioned by the owner of the estate at the time, Veith Turske, a German art dealer.

Access to the garden is via a wooded trail, which leads to a long, megalithic-style passage, which in turn leads to a narrow set of stairs that seem to ascend into the sky, bringing visitors into the garden. The garden itself consists of an elliptical crater surrounded by trees. At the center sits the “Vault Purchase,” a monolithic stone plinth, where visitors are invited to sit or lie down and gaze up at the sky.

Turrell envisioned giving visitors an unparalleled view of the “celestial vault” of the sky above, whether during the day, with the clouds rolling past, or at night, with the stars shining above.

He said about the Irish Sky Garden: “The most important thing is that inside turns into outside and the other way around, in the sense that relationships between the Irish landscape and the Irish sky change.”

Liss Ard draws its name from Lios Aird (“high fort” in Gaelic), which is fitting as the site once encompassed an ancient ring fort. The grounds were first acquired by the O’Donovan family in 1853 after they were forced off their home turf in Limerick by the de Burgos and Fitzgerald families. It remained in the family until 1994 when it was sold.

Read more: What to visit in Ireland? The 10 best places to visit

The estate then changed hands numerous times in the decades that followed. At one point it was owned by a Swiss army intelligence officer, Colonel Albert Bachman, who intended to use it as a refuge for the Swiss government in the event of a Soviet attack.

It has been owned since the 1990s by another Swiss family, the Sterns, who own a number of hotels around the world. Under their care, it has been a hotel, wedding venue, and a wellness retreat.