Into the west of Ireland - the Wild Atlantic Way story

Tracing the west coast of Ireland from Cork to Donegal the power of the Atlantic will keep you spellbound along your journey on the Wild Atlantic Way. 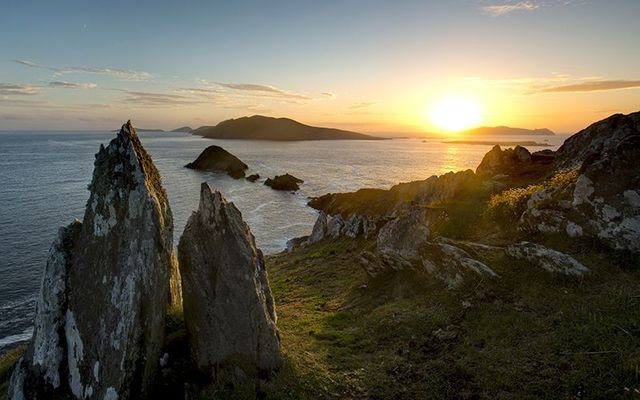 Dunmore Head and the Blasket Islands on the Wild Atlantic Way in County Kerry. Tourism Ireland

Tracing the west coast of Ireland from Cork to Donegal the power of the Atlantic will keep you spellbound along your journey on the Wild Atlantic Way.

Out at the very edge of Europe, the Wild Atlantic Way stretches for 1,500 miles along Ireland’s western seaboard. From Malin Head in County Donegal to Kinsale in County Cork, through regions like Connemara, Galway Bay and Kerry, it’s the longest defined coastal drive in the world.

Here, the ocean’s force has carved a coast of wild, raw beauty. Huge Atlantic rolling waves crash and churn, shaping jagged ocean crags, archipelagos and inlets, sea loughs, surfing strands, and the sheer granite walls of cliffs that are amongst some of the highest in Europe. Rare sea eagles circle over glacial mountains, dolphins leap the waves, seals bask on the shore, puffins nest on cliff faces and geese gather in great estuaries. And lighthouses safeguard sailors all the way up the coast – from Fastnet to Malin Head.

Right along this spectacular drive you’re aware of the elemental power of the Atlantic Ocean, turning from grey to green to azure blue as great weather fronts roll in and through. You’ll drive on routes that ring great peninsulas, reaching out into the ocean. Tiny roads hug the shoreline then switch back high above the Atlantic swell. Cloud-shadows race across sea and land, followed by shafts of sunlight. You’ll probably see a lifetime’s rainbows in just one trip.

You’ll want to stop often at the many small settlements and towns along the route. Every few miles there are places to stretch your legs and have a bite to eat. Maybe you’ll hunker down and stay a night or two to get to know the places and the people… to climb cliffs, surf waves and ride bikes. You could join in the craíc at sessions and festivals, go island-hopping and visit ancient sites or sit by turf fires in traditional pubs, where you’ll eat the freshest seafood and hear the Irish language, songs and stories. Out here in the west coast’s remote Gaeltacht regions, Irish is the mother tongue for many folk – and they’ll tell you “fáilte romhat isteach – you’re most welcome here”.

Read more: Exploring the remote and rugged wonders of Donegal

You could drive the whole route in one go – but you don’t have to. Instead, you may want to slow down, and dive in deep … For it’s out on these western extremities – drawn in by the constant rhythm of the ocean’s roar and the consistent warmth of the people – that you’ll find the Ireland you’ve always imagined.

This incredible video of the Wild Atlantic Way from Sam McAllister - sam.travel just takes our breath away. "It's funny how you view where you live with such disdain until you get the opportunity to go out there and explore it!" Find out more about his epic Irish road trip here: http://bit.ly/2ENZVMj

Posted by IrishCentral.com on Friday, February 16, 2018 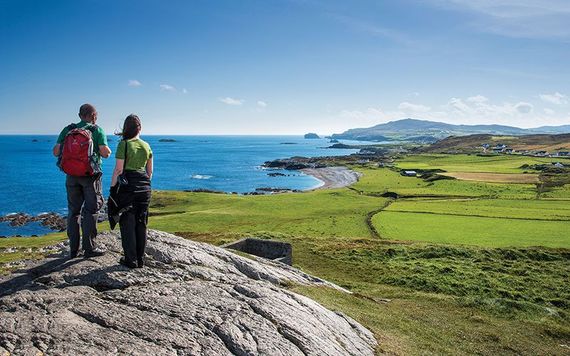 Malin Head, the most northernly point in Ireland, in County Donegal.

The tip of the Inishowen Peninsula is mainland Ireland’s farthest northerly point. The wild Atlantic has carved deep crevices into the rugged headland, like Hell’s Hole – a dramatic long, deep and narrow chasm where the swells roar and churn. And birds flock here, blown in on the Atlantic winds: regular visitors from Iceland, Greenland and North America; and rarer exotic creatures from further afield.

Mythical queen Banba has given her name to the peninsula’s tip – Banba’s Crown. It’s here that guides from Cycle Inishowen will meet you for a 45-minute ride to stretch your legs in the fresh sea air, and learn about the area’s wildlife, geology and history. 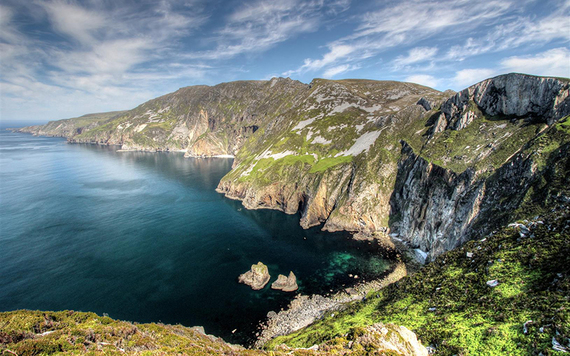 Paddy is the skipper of the Nuala Star. He’ll pick you up from Teelin Harbour on the north side of Donegal Bay, to sail below the sheer granite walls of Sliabh Liag (Slieve League) – at 600 m (1970ft).

They are amongst the highest accessible sea cliffs in Europe and the huge panoramas presented to you from these cliffs can look different from every angle.

Bright azure skies appear next to blue grey shafts of rain which bolt sea and sky together. Still further across this ever-changing canvas, beams of light, diffused by wisps of thin cloud, gild the wild sea, warming the cool grey water into pools of liquid gold.

Sometimes the Nuala Star is joined by dolphins, seals and whales. And in June you may see basking sharks, feeding on the plankton. There’s the option to go swimming in the little coves: wetsuits are provided, says Paddy, “if you think the water’s cold”. Once back on dry land, the climb up the Pilgrim’s Path is optional. On a fine day, the views from the top – across seven counties – are glorious.

Probe the peat at Céide Fields

An award-winning architect-designed pyramid built into the clifftop, high above the Atlantic, houses the Visitor Centre for Achaidh Chéide (Céide Fields).

This is the largest Stone Age monument in the world, set in a vast prehistoric landscape of bog, dramatic cliffs and coastline. Preserved beneath the wild blanket bog are 5000-year-old stone-walled fields, dwellings and megalithic tombs.

Take the guided tour and use the archaeologist’s probe, sliding down through the peat till you feel it striking stone, placed there 5000 years ago. This is the largest of thousands of archaeological sites along the Wild Atlantic Way – hundreds in this part of North Mayo alone, including standing stones, ring forts, stone circles and court tombs.

Absolutely stunning! Do you have a favorite spot in Mayo? Let us know below.

Posted by IrishCentral.com on Wednesday, April 18, 2018

Watch the sun set over the Aran Islands

An aerial shot of Inish Mor, the Aran Islands.

The viewing platform at O’Brien’s Tower is said to be the best place to see the sunset from the iconic Cliffs of Moher. The Tower was built at the highest point on the cliff edge in 1835, as an observation point for tourists, by far-sighted landowner Cornelius O’Brien. Before arriving at the Tower, you could try a guided walk along the cliff-edge paths with a Cliffs of Moher Ranger. 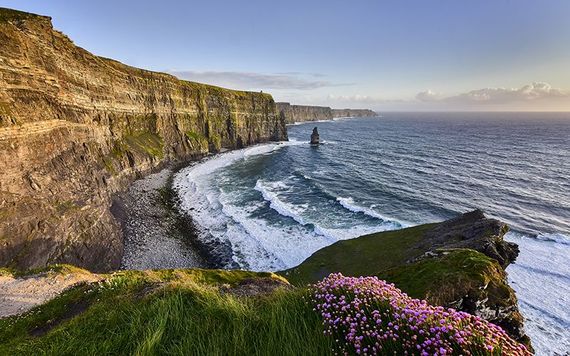 The Cliffs of Moher, in County Clare.

The walks take just over an hour and, depending on the time of year, you’ll see puffins, guillemots, kittiwakes, chough, peregrine falcon, fulmar and shags, among other birds.

West Clare is famous for its music – and the Long Dock (or ‘Dock’ as the locals call it) in the fishing village of Carrigaholt at the mouth of the Shannon is just one of the many pubs in these parts that offers traditional music nights, as well as Carrigaholt oysters, mussels, lobster and of course their own chowder. Come for one of the Dock’s special Irish Nights, when you can sing, dance and play pub games with locals.

Learn of a ‘dreamworld’ on an Atlantic crag

Boat trips to the UNESCO World Heritage Site of Skellig Michael are only possible when the weather is fine. And numbers are limited to safeguard this remarkable place. But you can still get a sense of the stunning achievement of the early Christians who built their hermitage on this jagged ocean crag, 1500 years ago – described by George Bernard Shaw as “part of our dreamworld” – from the film they show at the Skellig Experience Visitor Centre on Valentia Island. Then it’s a short drive or a walk up to the top of nearby Geokaun Mountain, whose gentle owner Muiris O’Donoghue will show you panoramic views of the Skelligs themselves and tell you stories from the edge of the world.

BOOK a tour of the Wild Atlantic Way on IrishCentral here