Here's a plum pudding recipe that's a little bit Clare, a little bit Donegal, and some Dublin thrown in for good measure! 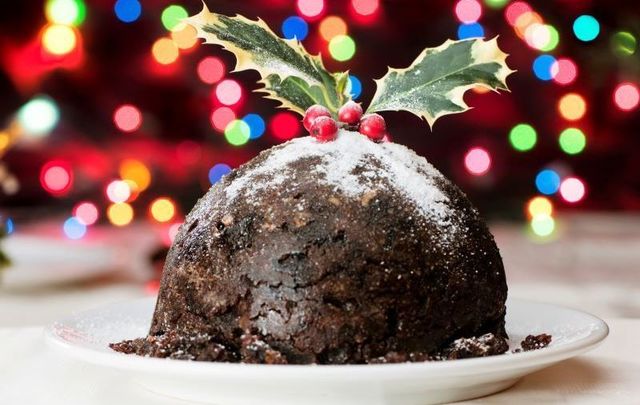 Plum pudding is the essence of Christmas in Ireland and no one can ever make it like one's own dear mother, but here's a recipe that's a little bit Clare and a little bit Donegal, with some Dublin thrown in for good measure.

There are many traditions and superstitions surrounding the Christmas pudding. Some traditions say to make the pudding by the 25th Sunday after Trinity, with 13 ingredients to represent Christ and His Disciples. Every member of the family is to take a turn stirring the pudding with a wooden spoon from east to west, in honor of the three kings.

It is said that setting the brandy aflame represents Christ’s passion. A sprig of holly as the garnish is a reminder if His ‘Crown of Thorns.’ Holly supposedly brought good luck and had special healing powers. It was often planted near houses in the belief that it protected the inhabitants.

Some families add coins to the pudding for luck. Everyone then stirs the pudding and makes a wish. Those who get the coins in their serving get wealth, health, happiness, and their wish will come true. Some people even add gold rings to the mix to indicate the finder will get married in the coming year.

A tradition that died out due to its depressing nature was the addition of thimbles or buttons to the pudding. This signaled that the finder would remain a spinster or bachelor forever, the loser slice if you will!

Mix all the dry ingredients in a large bowl. Rub the raisins and other fruits with the flour and spices. The flour adheres to the stickiness of the fruits and gives the pud a nice even texture.

Cut the butter into fine pieces and mix well with the dry ingredients.

In a separate bowl, mix the liquid ingredients. When the liquids have been well stirred, add them to the bowl with the dry ingredients. Mix all together very well.

The batter should be a bit loose, a little thicker than a cake mix. If it’s dry like bread dough, add more Guinness.

My mother would grease a big square of unbleached muslin and pour the pudding into this, tying off the top with string. In these modern times, heat-proof bowls are an acceptable substitute for the cloth bag method ... and much easier.

Fill the pot in which you are steaming the pudding to just below the top of the pudding bowl and gently boil for at least 12 hours. I use the slow cooker for this and it works very well. Depending on the size of the bowls used, you may get about three puddings from this recipe. I triple it and get at least a dozen quart-sized puddings. (Big family!)

When the pudding has cooled, remove it from the bowl, dribble brandy (or any other whiskey-type stuff) over the top of it, letting as much sink in as possible.

Seal the puddings in plastic wrap and then in aluminum foil. (Don’t let the aluminum touch the pudding as there is a reaction that dulls the foil and I suspect this is not good for the pud or the people eating it.)

Let it sit for as long as possible before serving. Three or four months is not too long. Occasionally dribble the pudding with a shot of the spirit of your choice: brandy, whiskey, bourbon, etc.

Turn it out on a heat-proof serving plate and proceed to the lighting process that follows the brandy butter recipe or unwrap the pudding, place it on the serving platter, and microwave for 10 minutes at 50 percent power. The microwave method, though obviously not traditional, works exceptionally well, and has become traditional in my family!

Soften butter. Beat the butter with an electric mixer until it’s fluffy.

Slowly add an equal amount or more of confectioner’s sugar. You will see that the mixture changes in texture.

Slowly add the brandy after this textural change in the sugar/butter blend. Beat further until the mixture becomes light and fluffy.

Spoon the brandy butter into serving dishes and chill until firm. When turning the mixture into the serving dish, finish off the top by swirling it into a circular pattern with the bottom of the spoon for a decorative effect.

Garnish everything with holly in berry if you have it.

To light the plum pudding, pour a generous cup of Christian Brothers Brandy (none other!) on top. There’ll be a little puddle on the plate. That should light pretty easily and the blue flames will creep up the sides.

Douse the lights in the dining room to bring in the pudding to the acclaim of all at the table. Don’t be disappointed if the flame is out quickly. That’s how it goes.

I have no idea or wish to know the carb count of this wonderful traditional food. Save one pudding for New Year’s Day dinner if you can. Leftover pudding is generally fried in a little butter in a cast-iron pan the next day. Microwaving works just fine too, but will not please any Luddites at the table.

Riding the favorite at Cheltenham, a jockey was well ahead of the field. Suddenly, he was hit on the head by a turkey and a string of sausages.

He managed to keep control of his mount and pulled back into the lead, only to be struck by a box of Christmas crackers and a dozen mince pies as he went over the last fence.

With great skill, he managed to steer the horse to the front of the field once more when, on the run-in, he was struck on the head by a bottle of sherry and a Christmas pudding.

Thus distracted, he succeeded in coming only second. He immediately went to the stewards to complain that he had been seriously hampered.

What are your favorite Christmas recipes?