Saying no to the cooked goose this Christmas

A Christmas gathering reminds writer Cormac MacConnell of Christmases in his youth. 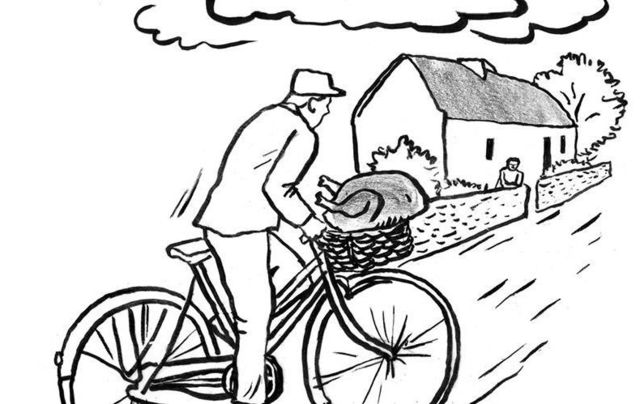 "Mary loved the taste of goose and so did Sandy and so, I remember, did my late brother Sean." Caty Bartholomew

Cormac MacConnell recalls a Christmas gathering and memories of his youth.

As the old year was tottering towards its close, I was having a mighty night in the great singing pub Cooper's in Birdhill in Tipperary with fellow scribes and locals, and towards the close of a merry night indeed one of the company invited me to join his family the following evening for a goose dinner.

My stomach instantly recoiled and gurgled, and it was as much as I could do to politely decline the invitation on grounds of a previous engagement.  As I did so my dear late mother Mary was very close to me indeed and laughing out loud in another dimension. Parents in whatever dimension are always close to us at this time of the year.

Mary loved a goose dinner, and the mere mention of the bird that had been the major dinner for the festive occasions of Christmas before being displaced by the big bronze turkeys brought her flickering brightly back into the mind and memory of her eldest son, and I relished it all as my stomach quieted down again.

Mary Bannon was already being courted by Sandy MacConnell by the time she was appointed principal teacher of the small school on Inishmore Island in Lough Erne in the late thirties.  She was a bright, feisty little woman from Lisbellaw and this was her first school.

In a very short time, she became like an adopted daughter to the tightly-knit community of islanders. There were no boarding houses or hotels, of course, on the island at that time, so she lodged with one of the local families, the Dolans, lifetime close friends afterward, and would have cycled to her little school from there every morning.  It was the way it was in the world.

Very quickly she became not just the Inishmore teacher, but also the lady who was good at cutting through all the red tapes that surround rural living to this day.  She signed dole forms for applicants for social welfare, wrote letters to various local authorities and government departments for those who needed them and, she told me years later, even wrote a succession of love letters for an islander whose sweetheart was working in Manchester. The letters worked too because she came home eventually and married him! She was that kind of lady.

Read More: Comical crimes of Christmases past in Ireland

Inishmore is bridged to the mainland, so Sandy came courting a couple of times a week and they married.  Mary left Inishmore when appointed principal of our local school in Rossdoney. We traveled there, incidentally, in a horse-drawn school van with canvas sides that were rolled up in the summertime and which started its journey every morning on another island, Cleenish Island, also in the silvery Erne.

But the warm Inishmore islanders never forgot my mother, and she was dramatically remembered every December and into January with weekly gifts of big Inishmore geese from the families of her former pupils.

Now there was no electricity in our parish in the late forties and early fifties when we arrived into the world, accordingly no refrigerators or anything like that.  The knowing islanders responded to that reality by delivering a plucked and trussed goose to Mary, Sandy, and growing family about every weekend from late November onwards.

Typically the islander father would arrive at our door on his bicycle with the huge goose on the carrier of the bike. He would be warmly welcomed. A few bottles of stout and a little whiskey would be downed as parish news was exchanged, and then he would cycle home happily and we would have goose dinners for two days afterward. Mary loved the taste of goose and so did Sandy and so, I remember, did my late brother Sean. I was never fond of the oily, heavy flesh of geese and, whilst I might have done my bit for the first couple of weeks I backed away from the plates after about the sixty delivery. Sad but true.

I can still, however, see the joy on Mary's face when she extracted yet another goose from the over of our kitchen range and tucked in with a will.  She loved both the meal and the expressed love and respect from the islanders that lay behind it. Good times indeed under the paper chains, and flickering candles of those festive seasons before the modern era. I grew up.  I was the first of the family to leave that special home. From that day onwards, finding my feet in Roscommon, I avoided goose dinners totally.

I have not tasted goose for a half-century with the greatest of relief and pleasure.  But I still vividly remember the taste and the smell and the relish on mother Mary's face when she was taking the latest of the long series of Inishmore geese out of the hot oven of her kitchen range. And she would be the last to leave the table too. Most of the families in the Fermanagh of that era raised flocks of geese for the Christmas season. They would cook and eat a few of the flock and sell the remainder for the sorely needed cash for Santa at the Enniskillen market.

At the end of nearly every lane around home, too, there was a cross-class of a gander that could terrorize a small boy by flying angrily at him the second the child invaded his territory and threatened the security of his harem. Yes, I remember it well.

So, when I was making my apologies for not being able to join my friend for the goose dinner the next evening after the mighty singsong in Cooper's of Birdhill, it was the memory of those lovely Inishmore islanders arriving with their gifts of geese for Mary and Sandy that were flickering through my mind all the time. God rest them all.  But I still won't eat any fragment of goose this coming year either!

What is one of your favorite Christmas memories? Share in the comments!