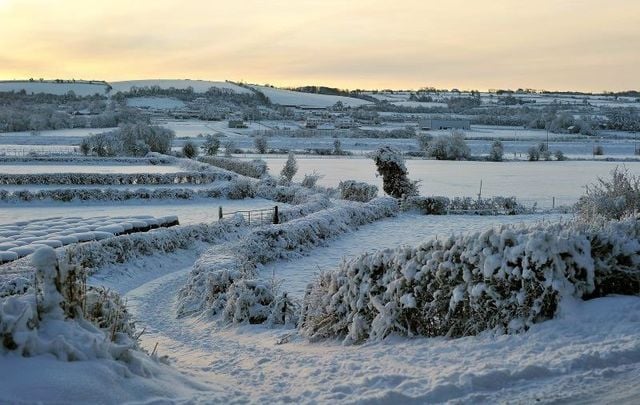 Michael Gallagher, who has been predicting Irish weather for decades, says there's a chance of a White Christmas this year.

Michael Gallagher, a retired mailman from Co Donegal who uses old methods to predict the weather, believes that there is a “strong possibility of snow around Christmas” for Ireland.

Gallagher, a retired postman native to Glenfin, has been predicting Irish weather for decades having learned the tricks of the trade from previous generations.

Gallagher told RSVP Live this week that a “changeable winter” and “lots of cold weather” is to be expected for December in Ireland.

"The foxes are coming down from the mountains and the robins are going into the houses - they are well aware that something is in the air," Gallagher said.

"There is definitely a change on the way in December, it will be very interesting to see.

"There was lots of hay made this summer and the older people are saying it will all be used over the winter - nature looks after its own."

Gallagher, who claims to have learned his weather-predicting methods from previous generations, has published two books: "Old Traditional Weather Signs" in 2009 and "Remedies and Cures of Bygone Era" in 2012.

"I like to keep the old traditions alive," Gallagher told RSVP Live. “The older generation would always use these methods, they relied on them."

Skeptical? Gallagher accurately predicted Ireland’s big freeze of 2010 as well as the scorching summer of 2018.

Read More: 'Beast from the East' Siberian blizzard about to give Ireland its worst snow storm in 36 years

Betting on an Irish White Christmas

Ireland has a fascination with White Christmases. Every year, bookmakers in Ireland offer bets on whether or not the country will enjoy a White Christmas, which is officially defined as lying snow being recorded at 09:00 am local time on December 25 and recorded at either Dublin Airport or Cork Airport.

Lawrence Lyons, a spokesperson for BoyleSports, told The Irish Mirror earlier in November: “Any chance of us freezing the odds on a White Christmas at 14/1 were dashed this week as temperatures took a plunge and now it’s just 10/1 that Dublin will see snow after a number of punters rushed to cash in.

"It’s still a relative long shot, but if we’ve called it wrong there will be plenty out there getting a nice gift this Christmas in the form of a winning bet."

As of November 15, the odds of an Irish White Christmas according to BoyleSports were

When has Ireland had a White Christmas?

The record for the most amount of lying snow ever recorded on a Christmas Day in Ireland was set in 2010 when the Casement Aerodrome reported 27 cm (11 inches).

Are you hoping for a white Christmas in Ireland? Let us know in the comments!