What is the Kennedy family curse?

A look back at the tragedies that have befallen the Irish American political dynasty. 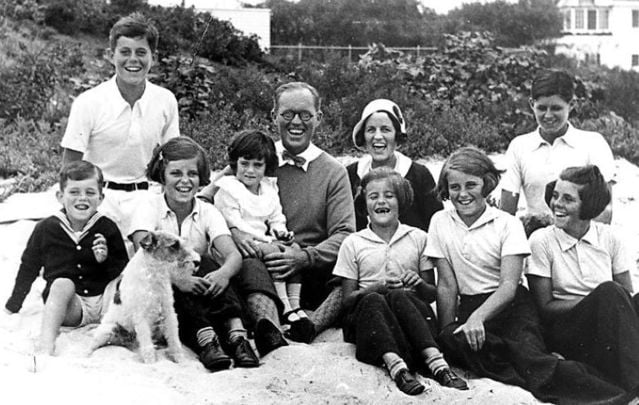 They may be one of the most famous families in the US or even the world, but the Kennedy family curse has long haunted the political dynasty, causing some more conspiracy-minded folks to question whether they sold their soul at some point for a shot at power.

The descendants of poor Irish immigrants from Co Wexford, the family climbed the ladder all the way to the White House but not without several tragedies along the way. But is the Kennedy family cursed or are these unfortunate events simply coincidences that could happen to any large family?

The Kennedy curse origin and cause

The Kennedy curse origin mainly comes from speculation and rumors built up over the years because of the vast number of unfortunate tragedies to have hit the ultra-successful Irish Catholic family and the number of tragic young deaths the family has had to endure.

Who put a curse on the Kennedys?

There is not a real answer for the exact person to have cursed the Kennedys if such a curse were to exist.

As a powerful family, they are sure to have made themselves an enemy or two and many believe that Joe Kennedy, the family’s patriarch, brought the tragedy upon himself and his offspring by the forceful way in which he pushed them to succeed.

Of Joe Kennedy’s nine children, one was confined to a home for the mentally ill, two were killed in plane crashes, two were assassinated in public office and one had his political career ruined by an accident that resulted in the death of a young campaign worker. That’s not even including the further tragedies that hit his grandchildren and great grandchildren.

In a book released by Les Williams earlier this year, “The Kennedy Curse: Shattered” claims that there is no Kennedy curse but simply an overpowering patriarch pushing his children to extremes.

“Joe Kennedy raised his children to believe that they were better than anyone else and that they had to win, every time and at any cost. His obsessive, driving ambition would influence the decisions his children made and the way they lived their lives and this controlling, overbearing approach would have disastrous consequences for the family over the years,” Williams writes.

Do the Kennedy family themselves think they’re cursed?

The Kennedys themselves have never spoken much about the idea of a Kennedy family curse but they are also a family known for their secrets, the full details of JFK’s chronic back injuries and constant physical pain while he sat in the Oval Office only emerging as public knowledge in the past few months, even though the 35th President was close to death at times, so bad was his health.

Details have also only just recently emerged of the fate of the young Rosemary Kennedy whose life was all but destroyed by her father’s decision to submit her to experimental brain surgery that went drastically wrong.

Senator Ted Kennedy did once question whether a “curse actually did hang over all the Kennedys" during his own testimony about the Chappaquiddick incident in 1969. Ted has accidentally driven his car off a bridge, trapping his 28-year-old companion  Mary Jo Kopechne, inside to die in the waters. He pleaded guilty to a charge of leaving the scene of the accident causing personal injury.

His son Ted Kennedy Jr was also said to be “heartbroken”, however, by the 2015 book from his brother, former Rhode Island Rep. Patrick J. Kennedy, named “A Common Struggle: A Personal Journey Through the Past and Future of Mental Illness and Addiction", in which he blames the mental health for many of the tragedies that occurred within the family.

Detailing his own struggles with addiction and mental health issues, Patrick Kennedy highlights two incidents in particular which he feels could have been avoided if the Kennedy family had had a more open approach to talking about mental health. The first went back to Rosemary Kennedy and the forced lobotomy his grandfather Joseph P. Kennedy ordered to control his aunt’s outbursts.

“She could have lived a life very free of disability,” Patrick lamented to People magazine.

The second was the death of Robert F. Kennedy’s fourth son David, who fatally overdosed at 28, a death Patrick believes was linked to PTSD following the assassination of his father.

“David lost his father so violently and then, having to watch it all on television,” Patrick says of his uncle RFK’s assassination.

“I don’t think anybody understood that [PTSD] was a real injury that, if untreated, would kill him.”

Some of the main events that caused Kennedy curse speculation:

The death of Joseph Kennedy Jr.,  August 12, 1944: The elder brother of JFK and RFK and the son previously picked for the presidency by Joe Kennedy meets his untimely death when his bomber aircraft explodes over East Suffolk during the Second World War as part of Project Anvil.

The death of Kathleen 'Kick' Kennedy Cavendish, May 13, 1948: JFK's sister and the wife of Marquess of Hartington, died in a plane crash in France.

JFK and Jackie Kennedy lose a child, August 9, 1963: Patrick Bouvier Kennedy died of infant respiratory distress syndrome two days after his premature birth. Jackie missed the funeral because she was still recovering from the C-section at Otis Air Force Base.

The assassination of President John F. Kennedy, November 22, 1963: After a 15-year break, the Kennedy family curse strikes again and President John F. Kennedy is assassinated as he rides in an open convertible through Dallas, Texas. While conspiracies continue to run amuck on the real cause for his assassination and who exactly was behind his death, Lee Harvey Oswald was the man officially arrested for the crime, himself assassinated just two days later by nightclub owner Jack Ruby.

The assassination of Senator Robert F. Kennedy, June 6, 1968: JFK's younger brother and his attorney general was assassinated after winning the California Democratic primary. The gunman, Sirhan Sirhan, remains in a prison in California.

The death of RFK’s son David Kennedy, April 25, 1984: David Kennedy, the fourth of RFK's eleven children, died in a Florida hotel room after overdosing on cocaine, painkillers, and antipsychotic medicine. Patrick Kennedy has claimed that David suffered from PTSD following his father’s death.

JFK’s only son, John Jr, dies in a plane crash, July 16, 1999: John F. Kennedy Jr, JFK's only son, died while flying his light aircraft to the holiday island of Martha's Vineyard. He reportedly became disoriented during the night flight and crashed into the ocean. Authorities put the accident down to a “pilot error.” Only one child of JFK and Jackie Kennedy Onassis is still living, Caroline Kennedy, the former US ambassador to Japan.

The death of Robert Kennedy’s estranged wife, May 16, 2012: Mary Kennedy, the estranged wife of Robert Kennedy Jr, is found after reportedly hanging herself at her New York home. A family funeral was held in the Kennedy compound despite the fact that Mary could not visit there for several years before her death.

The death of Saoirse Roisin Kennedy Hill, August 2, 2019: Saoirse, the 22-year-old daughter of Courtney Kennedy and Paul Hill (of the Guildford Four) and granddaughter of Robert F. Kennedy and Ethel Kennedy, was found dead on the Kennedy compound in Hyannis Port, Massachusetts. Her death has been ruled an accidental overdose.

What do you think? Does a Kennedy family curse exist? Let us know your thoughts in the comments section.