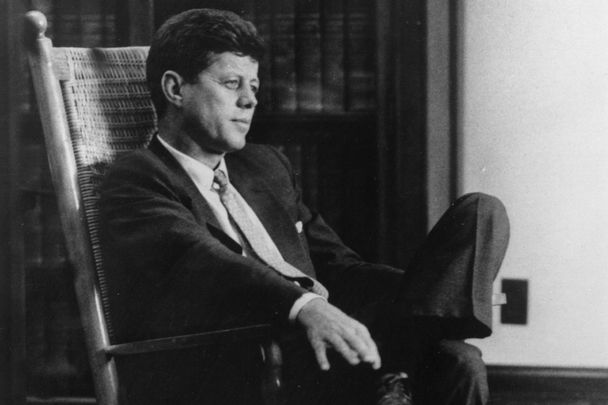 John Fitzgerald Kennedy, the United States’ only Catholic president, once said: “There are three things in life: God, human folly, and laughter. The first two are beyond our comprehension, we must make the best of the third.”

On November 22, 1963, the laughter died, not only for JFK but also for the United States of America.

For most baby boomers, there are two dates that stick out in their minds—November 22, 1963, and September 11, 2001. Both moments of unbelievable national tragedy. But maybe 11/22/63 was a little tougher because all Americans knew the man. He barely won the 1960 election—although the following year over 60% of Americans said they voted for him— but, he brought something special to the White House—a beautiful young family, laughter, culture, and class.

Whatever you feel about Kennedy, the rest of the world saw this man who represented the United States of America and what they felt was simple—hope.

Kennedy was uniquely Irish. He was the great-grandchild of immigrants from County Wexford. Thanks to his family's great wealth he never suffered poverty or hard discrimination—save for those Boston Brahmins who thought him “Shanty Irish”—but in his gut, he was a Fenian.

In this day of draft-dodging political cowards—“Chickenhawk” is the perfect description—Kennedy used his father’s influence to get into the United States Navy during World War II.

As the skipper of the PT-109 in the hotly contested Solomon Islands, his plywood boat was cut in half by a Japanese destroyer during night action and he was violently flung back on the bridge, ruining his back for the rest of his life. He gathered his crew around him, saving a badly burnt crewmate by slipping a belt under his arms, putting the belt in his teeth, and towing the man to an island. For his valor, he was awarded the Navy and Marine Corp Medal and the Purple Heart.

That’s a far cry from recent presidents who were outright draft-dodgers or hiding out in safe places like the Texas National Guard.

The last year of Kennedy’s life was a whirlwind. In October 1962, he faced down the Russians over missiles in Cuba. The generals wanted war, but the President, who knew war firsthand, managed a negotiated settlement which the world saw as a win for the young President.

The first half of 1963 brought unparalleled success to Kennedy. On June 11, 1963, he gave a nationally televised speech about Civil Rights where he called upon Americans to give equal rights to their fellow Negro citizens because “We are confronted primarily with a moral issue. It is as old as the Scriptures and is as clear as the American Constitution.”

In 1964, Lyndon B. Johnson would pass JFK’s Civil Rights Bill just as it was written by Kennedy.

On June 26, 1963, Kennedy gave his famous “Ich bin ein Berliner” speech in Berlin which built up the hopes of the population of Berlin while warning the Russians that their time would come.

Immediately after Berlin, he flew to Ireland, where he was greeted on the tarmac at Dublin Airport by President Eamon de Valera.

The RTE feed is one of unabashed pride as it reads: “Welcome Mr. President.”

Kennedy went on to address the Irish Parliament, the Dáil, but the thing that stands out on that Dublin visit is that he took the time to visit Arbour Hill where 14 of the sixteen martyrs of the Easter Rebellion are buried in a mass grave. He is the only American President to pay his respects to these murdered leaders. It is poignant to see him reading the names of the patriots on the side of the grave as  Taoiseach (Irish Prime Minister) Seán Lemass, who knew many of these men, walks at the President’s side.

Read More: On this day in 1963 JFK came to Ireland - What his historic trip meant

Kennedy took pride in his Irishness as one can see from this clip when the Clancy Brothers and Tommy Makem sang “We Want No Irish Here” for the President. Liam Clancy’s cheeky introduction manages to elicit a huge smile out of the President.

JFK said goodbye to Ireland at Shannon Airport in County Clare, but promised “I’ll come back in the spring,” but he had already lived his last spring.

August was to prove a momentous month for Kennedy. On August 5, 1963, he signed the Nuclear Test Ban Treaty, which made the world safer for every human being, but just four days later tragedy struck when his infant son, Patrick Bouvier Kennedy, died two days after his birth.

Mrs. Kennedy disappeared for months but reemerged in November for a two-day political tour of the Texas cities of San Antonio, Houston, Fort Worth and Dallas.

JFK was greeted by fantastic crowds in the supposedly hostile territory. You can see the President obviously enjoying himself as he and the First Lady work the crowds. In his last speech, he issued a prescient warning saying we live in “a very dangerous and uncertain world.”

On the arrival of Air Force One at the ironically named Love Field in Dallas, the President and Mrs. Kennedy again worked the crowd, but, in the background there can be seen a Confederate flag stubbornly flying, reminding the world that not everyone approved of his Civil Rights agenda.

Twenty minutes later, the President was shot and a shocked nation listened to Walter Cronkite, in tears, give the terrible news of the assassination of the nation’s 35th president.

JFK set about fulfilling President Lincoln’s promise to the slaves at home and promoting peace abroad, sending American volunteers around the world serving in the Peace Corp.

He was not without his faults. He was a man with a weakness for the flesh, but he did not blatantly brag about it. He tried to lift a nation and push it forward—and he succeeded. That’s why 53 years after his death he is still fondly remembered around the world, especially in the small island nation which gave the world his family.