This week in history: JFK signs the nuclear test ban treaty in 1963

President Kennedy, after years of negotiations, ratified the limited nuclear test ban treaty on October 7, 1963, which was entered into force on October 10, 1963. 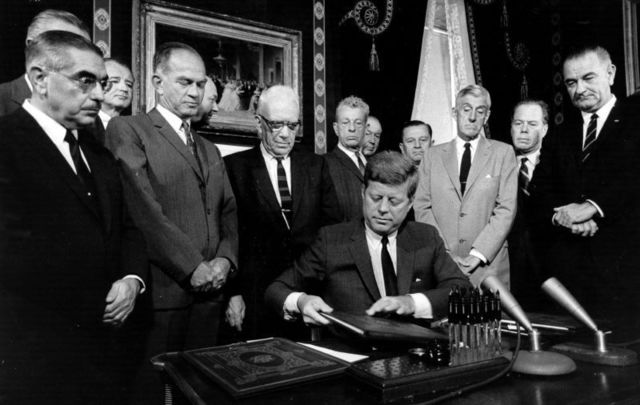 Nearly 20 years after the US dropped two atomic bombs on Japan in 1945, President John F. Kennedy signed into effect the Nuclear Test Ban treaty on October 7, 1963.

The US Government’s Office of the Historian states: “With both sides [the US and the Soviet Union] working to develop new and better nuclear technology over the course of the late 1950s and early 1960s, each engaged in a series of test explosions. These nuclear tests received worldwide scrutiny, not only for what they meant for the arms race but also for what they meant for human life. As the United States, the Soviet Union, and the United Kingdom tested new nuclear technologies in the earth’s atmosphere, concerns emerged worldwide about the potential effects of radioactive fallout on the people exposed to it. This led to the formation of activist groups and public discussion of the issue.”

In October 1962, the Cuban Missile Crisis emerged as the main catalyzing factor to force the nations to agree upon their management of nuclear weapons. Khrushchev described the event by saying: "The two most powerful nations had been squared off against each other, each with its finger on the button." Kennedy similarly said: "It is insane that two men, sitting on opposite sides of the world, should be able to decide to bring an end to civilization."

Of the US and the Soviet Union, the President said: “We are both devoting massive sums of money to weapons that could be better devoted to combating ignorance, poverty, and disease. We are both caught up in a vicious and dangerous cycle in which suspicion on one side breeds suspicion on the other, and new weapons beget counter weapons.”

Kennedy went on to announce that, in conjunction with UK Prime Minister MacMillan and Soviet Union Chairman Khrushchev, he was working towards a comprehensive nuclear ban treaty.

The Soviet Union shared a broadcast of Kennedy’s address in an apparent move of support for his speech.

The following month, on July 25, 1963, after only 12 days of negotiations, the US and the Soviet Union agreed to ban testing in the atmosphere, in space, and underwater.

President Kennedy announced the agreement the following day during a live televised address:

The Limited Nuclear Test Ban treaty was signed in Moscow on August 5, 1963, by US Secretary Dean Rusk, Soviet Foreign Minister Andrei Gromyko, and British Foreign Secretary Lord Home—one day short of the 18th anniversary of the dropping of an atomic bomb on Hiroshima.

President Kennedy convinced both the American public and a divided Senate over the next two months to support the treaty. On September 23, 1963, the Senate approved the treaty with a vote of 80 - 19.

President Kennedy signed the ratified treaty on October 7, 1963, and it was entered into force on October 10, 1963.