Harold Macmillan worried about “formidable nuisances” getting their hands on the weapons. 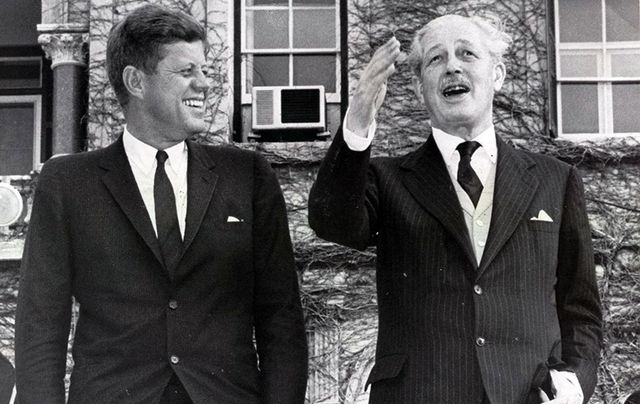 The release of classified files from 1962 reveal that in a letter to President John F Kennedy former British Prime Minister Harold Macmillan chillingly predicted that the world was heading toward a nuclear crisis.

Sixty-seven-year-old Macmillan, who formed an unlikely friendship with the charismatic, young President, fretted about the possibility that “formidable nuisances” would develop nuclear weapons.

“If the test program of the Great Power goes on there is no hope of dealing with what you call the Nth country problem,” he wrote to President Kennedy.

“Some countries will develop powerful systems, probably the Chinese and eventually the Germans – and, of course, the French.

“Nothing can stop them if the Great Powers go on. Others will develop nuisance systems – but they will be very formidable nuisances.

“And if all this capacity for destruction is spread about the world in the hands of all kinds of different characters – dictators, reactionaries, revolutionaries, madmen – then sooner or later, and certainly I think by the end of this century, either by error or folly or insanity, the great crime will be committed.”

The letter was put into the public domain as the White House continues to clash with North Korea over the latter’s nuclear tests.

Totaling nine pages, Macmillan's letter tells the President he felt “morally bound” for Britain to conduct further nuclear tests in light of the ever-growing threat from the Soviet Union.

In 1961 the USSR had performed 57 nuclear tests of its own and Kennedy was anxious the west would not fall behind.

Macmillan worried that Britain, “might one day find ourselves at their [the Soviet’s] mercy.”

He also conceded that were Moscow of a mind to strike against Britain with a nuclear weapon, nothing would stop the destruction of the United Kingdom.

“Our scientific advisors,” he laments, “you will remember, said that, if it were not a matter on which national survival itself was at stake, they would say that [an anti-missile system] was impossible.”

Kennedy and Macmillan struck up an unusual friendship during their time in office. The pair were vaguely related to each other – Macmillan’s wife, Lady Dorothy, was the aunt of the Marquess of Hartington who married Kennedy's younger sister Kathleen despite the Kennedy family’s concerns about his Protestant faith.

JFK confided in “Supermac” his infidelities, telling the elder statesman, “I wonder how it is with you, Harold. If I don’t have a woman for three days, I get a terrible headache.”

On affairs of the heart however, President Kennedy had more in common with Mrs Macmillan who had taken one her husband’s colleagues as a lover in the 1920’s and never given him up. Macmillan considered his wife’s infidelity “a chronic illness.”

The pair met at least a dozen times during JFK’s short presidency and exchanged not only notes on public policy but Christmas and birthday cards as well as affectionate personal musings.

“After all, we were all friends; and the whole atmosphere was that of a country house party, to which had been added a garden party and a dance,” Macmillan wrote after one occasion hosting Jack and Jackie.

After JFK’s assassination Jackie wrote to Macmillan, “Sometimes I become so bitter – only alone – I don’t tell anyone... I used to think there was just nothing – or some great vague peace – but now I want to think as I did as a child – that when I die I will go to heaven and find Jack – and that he can see me now, and see all of us and how lost we are without him.”

Macmillan responded, “You have shown the most wonderful courage to the outer world. The hard thing is really to feel it, inside.”

The pair would exchange letters up until his death in 1986.

Here's some amazing Pathe newsreel footage of JFK's visit to the UK in 1963: