On This Day: Robert F. Kennedy dies after being shot the night prior in 1968

In 1968 Senator Robert F. Kennedy died from the injuries received on June 5, when he was shot by his assassin, Sirhan Sirhan 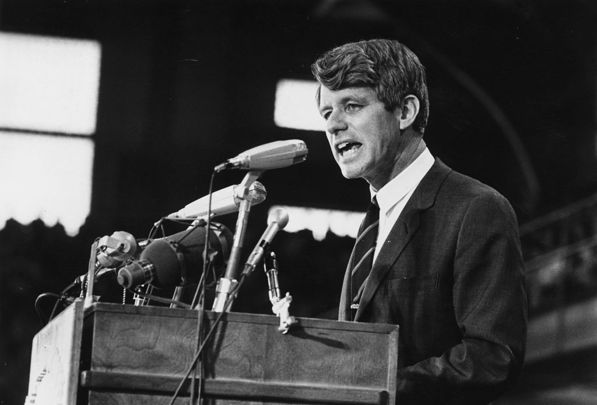 Senator Robert F. Kennedy died on June 6, 1968, the day after he was shot by Sirhan Sirhan.

On June 5, 1968, after scoring a major victory in winning the California primary, Robert F. Kennedy was shot by Sirhan Sirhan, a 24-year-old Palestinian. He died the following day, June 6.

Months later, on April 17, 1969, Sirhan was convicted of the premeditated murder of the senator and potential Democratic candidate for the Presidency. He was initially sentenced to death but later had his sentence commuted to life in prison. The 74-year-old is still in jail having last been refused parole in February 2016.

Born in Jerusalem on March 19, 1944, Sirhan moved to the US when he was 12 years old, graduating from college in California after spending some time in New York.

Sirhan is said to have been a fervent Christian and explored several denominations in his adult life, identifying as a Baptist and Seventh Day Adventist before joining the occult Rosicrucians.

At the time of his assassination, Robert F. Kennedy was the Democratic front-runner for the presidential candidacy and had just won an important primary in California when he was shot four times by Sirhan as he made his way through the kitchen of the Ambassador Hotel.

Kennedy, who had also served as Attorney General to his brother John F. Kennedy, assassinated in 1963, survived for 26 hours after the shooting before dying of his injuries.

It is thought that Sirhan greatly resented Kennedy’s support of the Six-Day War intervention in Israel that had taken place the previous year. His hatred for Kennedy was seen in personal journals seized from his home and from a taped confession.

Arrested at the scene, Sirhan confessed the murder to the police a few days later but still pleaded not guilty. He was later refused by a  judge when he attempted to change his plea to guilty.

Acting strangely during his lengthy trial, his counsel claimed Sirhan was of diminished capacity at the time of the murder but it wasn’t enough for him to be cleared of the charge and on April 17, 1969, he was convicted. Three years later his sentence was commuted to life in prison after the California Supreme Court ruling in People v. Anderson, which outlawed the death penalty in the state.

He continues to seek parole, with his team claiming that he had been acting under hypnosis carried out by the Rosicrucians or a political organization.

Other conspiracy theories claim that there was a second gunman at the scene. This claim was backed by witness Nina Rhodes-Hughes.

In 2016, Paul Schrade, a close personal friend of Kennedy who was injured in the shooting, also claimed that while Sirhan shot him, he had not pulled the trigger on Kennedy himself instead placing the blame on a second gunman.

Sirhan has claimed he has no recollection of the murder or of his confession to the police - in custody or when he was under trial. He was denied parole for the 15th time in 2016.