Robert F. Kennedy on the need for the Irish to lead the battle against racism

Kennedy’s famous words at an Irish dinner in Philadelphia on March 17, 1964 reverberate more than ever today after Trump’s racist administration. 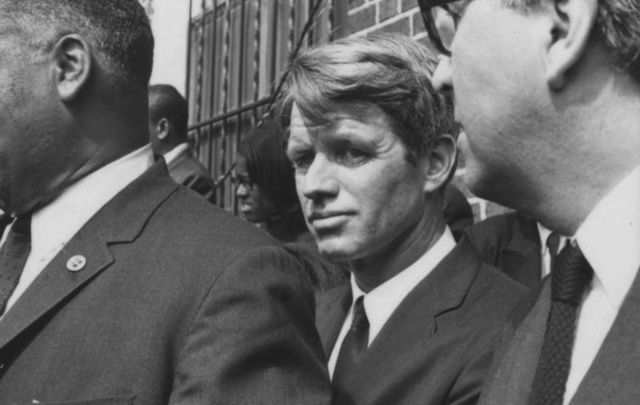 On March 17 1964 just months after his brother was assassinated Attorney General Robert Kennedy made his first speech since that awful tragedy at the Friendly Sons of Saint Patrick dinner in Philadelphia.

Robert Kennedy used the occasion to urge the Irish to not “stand aside” on the issue of racism given the nature of the struggles of the Irish people to be accepted in America itself. At a time when Irish and Black links are becoming much more prominent and tensions on race spurred by Donald Trump have escalated, RFK's speech seems especially important.

Here are some excerpts:

“We remember that black day in February 1847, when it was announced in the House of Commons that 15,000 people a day were dying of starvation in Ireland. And you may recall that Queen Victoria was so moved by this pitiful news that she contributed five pounds to the society for Irish relief.

"So the Irish left Ireland. Many of them came here to the United States. They left behind hearths and fields and a nation yearning to be free. It is no wonder that James Joyce described the Atlantic as a 'bowl of bitter tears', and an earlier poet wrote, 'They are going, going, going, and we cannot bid them stay.'

Kennedy stated: “I would hope that none here would ignore the current struggle of some of our fellow citizens right here in the United States for their measure of freedom.

“In considering this it may be helpful for us to recall some of the conditions that existed in Ireland from 1691 until well into the nineteenth century against which our forefathers fought. We might remember, for instance, that in Ireland of 1691 no Irish Catholic could vote, serve on a jury, enter a university, become a lawyer, work for the government or marry a Protestant.

“There are Americans who -- as the Irish did -- still face discrimination in employment - sometimes open, sometimes hidden. There are cities in America today that are torn with strife over whether a Negro should be allowed to drive a garbage truck; and there are walls of silent conspiracy that block the progress of others because of race or creed, without regard to ability.

“It is toward concern for these issues -- and vigorous participation on the side of freedom -- that our Irish heritage must impel us. If we are true to this heritage, we cannot stand aside And, so, it is my great delight to be with you here tonight. as we take a few moments to share the rich heritage of the Irish. It's worth noting, I think, that all the wealth of our legacy stems from a small island in the far Atlantic with 'a population one quarter the size of the State of Pennsylvania.

“The Irish have survived persecution in their own land and discrimination. in ours. They have emerged from the shadow of subjugation into the sunlight of personal liberty and nationality.  And they have inspired  the struggles for freedom of many more.”