IrishCentral contributor Daniel Ryan Howarth looks back on the NYC St. Patrick's Day Parade and gears up for the return of the parade in its full form for the first time in two years. 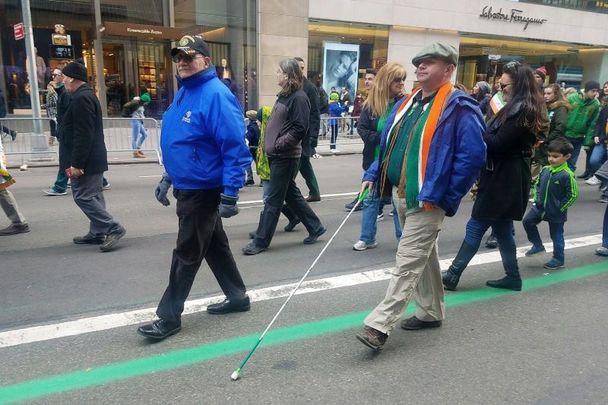 The New York City St. Patrick's Day Parade will return in its full form on March 17 after two years of pandemic-related disruptions.

A Treasured Tradition Passed Down

On a frigid St. Patrick's Day in 1970, Bridget Ryan Howarth, a 35-year-old native of Castlecomer, Co Kilkenny, was a new mother on a mission. She was making an earnest effort to take her first-born child, 3-month-old Daniel Ryan Howarth, to his first parade on March 17th as a newly minted member of the Irish diaspora in New York.

Aided by a girlfriend, Bridget bundled up her son and burrowed him into the furthermost recesses of a baby carriage's bedding. They headed out for the Kingsbridge Road station of the Lexington Avenue subway in their North Bronx neighborhood to make the trip downtown in order to attend the parade and ultimately make the commensurate walk up Fifth Avenue with thousands of others. One can imagine their buoyant mood as they exited Grand Central Station and melted into a forest of people sporting 40 shades of green.

Alas, my rite of passage on my first St. Patrick's Day was to be prohibited by temperatures that reached a low of 27°F.

Compounding the problem was the fact that in a very long line of march - the longest of any parade in the world - the County Kilkenny Association of New York was a relatively small contingent that often found itself in the final third of the lengthy procession with requisite yawning wait times that stretched well into the early evening.

My mother had marched in many NYC St. Patrick's Day parades since arriving in America in 1954, standing up to be counted as a daughter of Ireland and a proud naturalized citizen of the USA. No matter that the inclement weather might have postponed our joint participation in my inaugural St. Patrick's Day celebrations, I would be afforded many more opportunities to develop an Irish identity across my formative years.

With the passage of time, I would grow to appreciate the greater symbolism reflected in many elements of the parade. Indeed, I would feel myself becoming increasingly tethered to the invisible bonds that connect us to the generations who have gone before.

My mother influenced me to chart a course of cultural discovery that broadened and deepened my vicissitudes with the Irish and Irish American experience, perhaps more than my mother, or anyone else for that matter, might have expected.

That, in turn, has intensified the thoughts and feelings I have when I participate in the NYC St. Patrick's Day Parade. It became progressively integral to celebrating my favorite holiday, especially after the death of my mother in 2012.

Hence, the absence of the parade during the COVID-19 pandemic these past two years has left a hole in my calendar and a damper on my spirits on March 17th since 2020.

"There's no place like New York on St. Patrick's Day"

My mother Bridget always asserted this belief. She was right.

Yes, there are cities outside of Dublin that have a higher concentration of people with an Irish heritage like Boston, Massachusetts, and St. John's in Newfoundland, Canada.

Not to be outdone in its singular uniqueness is the commemoration on the Caribbean island of Montserrat, or the flamboyance of the Irish capital Dublin's own parade.

Of course, there are a host of St. Patrick's Day parades in greater New York like the extremely diverse and inclusive St. Pat's For All parade in Queens, and the hometown feel of the neighborhood parade in New York's Little Ireland along McLean Avenue in Yonkers.

Countless smaller parades can be found in the suburbs, and naturally, St. Patrick's promenades are replicated the right world around. But given the fact that the Irish are a worldwide nation, what bigger or more appropriate stage is there to present our collective story and spirit than the streets of Manhattan?

Since 1762, successive generations have marched up Manhattan's Broadway and later Fifth Avenue, although it is important to reflect on the fact that women weren't able to march until 1918. Those individuals were a reflection of where they had come from and an arc of their ambitions as a people. The fates and fortunes of Ireland and her transplanted children were dramatized on the streets of New York. Those streets were the scene of civil strife, individual struggles, and sacrifices, as well as no small share in the successful labors which gave birth to a uniquely American city destined to be the crossroads of the world.

So it came to pass in the years after that St. Patrick's Day in 1970 that I would find myself on those same storied streets many a March 17th. My parents would bring my brother, sister, and me into the city when we were kids and the sheer magnitude of the event obscured any notions of sentimentality or stoicism for us kids. Sensitivities would come with maturity.

As a kid, I marveled at the sea of humanity and the cacophony of bagpipe strains of "The Minstrel Boy" cascading evenly over the rising notes of high school band's painstakingly rehearsed renditions of "Danny Boy" or "When Irish Eyes Are Smiling."

I found it curious to see my mother interacting with total strangers as if they had been lifelong friends, or to see my father heartily greeting past friends from the old neighborhood who were either marching or watching amidst the throngs along the parade route.

Sometimes it seemed like an interminable wait as a kid to finally step off. There are no floats, dancers, or hand-outs of treats, just a continuous stream of people marching behind a myriad of banners: emergency services, fraternal associations like the Ancient Order of Hibernians and emerald societies, alumni associations for schools and educational institutions, union locals, military and veterans representatives, and of course the omnipresent politicians.

While many of these groups have Irish DNA in their core foundations or strong associations with the Irish community, some of the politicians are there out of self-promotional expediency. One clear contrast to that was the late mayor Ed Koch, a charismatic Jewish mayor who showed up every year in a well-worn Aran sweater and genuinely enjoyed interacting with the crowd.

During The Troubles in the North, the "England Out Of Ireland" banners were plentiful and struck a visceral chord with the assembled audience.

Of course, the "plastic Paddys" were always milling about the periphery of the parade wearing their gaudy gear and being demonstrably inebriated. While I've always resented such public displays of foolishness, age has tempered my distaste and allowed me to quietly dismiss their ignorance and chalk it up to individuals susceptibility to crass commercialism and clueless cultural appropriation. I must admit that their shenanigans are sometimes the source of a good laugh at their own expense. I mean I'm no prude...I'm all for having a good time and getting my Irish on...but that's never been my style. I guess it is part of the price for Irish America being absorbed into the mainstream culture of the country. Other ethnic groups have certainly had similar experiences and suffered unshakeable stereotypes.

My favorite element of the parade has always been the presence of the United Irish counties associations and their respective 32 banners identifying each of Ireland's counties. The county banners are really more like beautiful hanging tapestries attached to and supported by poles which are carried by groups of up to four men who themselves are flanked on either side by the Stars & Stripes of the United States and the Irish tricolor. Each county's double-sided banner depicts notable individuals or scenes associated with its history or identity. In county Kilkenny's case, one side features James Stephens, the founder, and organizer of the Irish Republican Brotherhood. On the opposite side is the countenance of Brother Edmund Rice, who founded the Catholic order of the Christian Brothers, who were earnest educators in the years after the Catholic Emancipation in the first half of the 19th century. The county contingents are often cheerful as they walk behind their banners, waving to the spectators and obviously proud to represent their ancestral home.

I also have fond memories of the whole family returning uptown after finishing the march to go out for dinner. My paternal grandmother and uncles lived in the Norwood section of The Bronx back in the 70s, 80s, and early 90s when the neighborhood and one of its main thoroughfares, Bainbridge Avenue, was the epicenter of Irish culture and "the craic". We'd go out as a family to a variety of establishments like the Norwood Pub on Gun Hill Road, the Green Tree on The Oval on Bainbridge, or the Killala Bar & Restaurant next to my grandmother's apartment building on East 208th Street. Those meals were replete with storytelling, my mother's lilting laughter, and my father's melodious voice singing Irish ballads to the delight of the other patrons.

There are two stand-out moments from all of these years being part of the parade.

The first was in 2002, six months after the tragic events of 9/11.  Members of the family and I were watching the parade when the planned moment of silence during the parade had arrived. At that very moment, the contingent of 343 American flags representing each of the FDNY's members lost on duty on 9/11 halted in front of us. The flags were mute as they slightly wavered in a barely perceptible breeze. The heart of Midtown Manhattan fell silent and you could have heard the proverbial pin drop it was so reverential. It was a powerful moment that stands in stark contrast to the polarization our society is undergoing right now.

I have a much more personal recollection of the 2012 St. Patrick's Day parade. At the time, my mother was terminally ill and it turned out to be her last triumphant march following the famous green line. She had to be pushed in a wheelchair, but by her side for the first time, holding her grandmother's hand the whole way, was my daughter Stella Catherine.

That March 17th we had a reception for my mother in one of the top floor, scenic view suites in the old New Yorker Hotel. The room had unobstructed views of the Empire State Building. At night, when that iconic skyscraper lit up green in honor of the Emerald Isle, it poignantly symbolized what it meant to be a New Yorker... An American. to be Irish. And my mother Bridget Ryan Howarth was all of those.

Forward March...Looking towards The Future

Obviously, I'm glad that the NYC St. Patrick's Day Parade is returning for 2022.

In 2007, after a lifetime of living in or within an hour of New York City, my immediate family moved to the Green Mountains of Vermont. Being an individual who happens to be visually impaired has made it a challenge each year but since the passing of my mother in 2012, I've striven to make each and every parade since then. I hope this year will be no exception.

I'm looking forward once again being part of the throng of folks wearing the green...getting that adrenaline rush upon turning north onto Fifth Avenue...and riding that wave of good feelings and melancholy memories all the way uptown, moving forward with hope in my heart for bright, brand new days for all of us.