On This Day: Ernest Ball, the composer of “When Irish Eyes Are Smiling,” died

Composer Ernest Ball is the man behind "When Irish Eyes are Smiling," one of the most beloved songs about the Irish ever written. 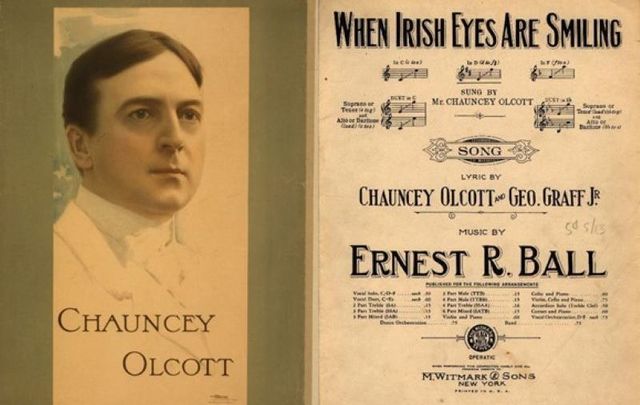 Do you know the story behind 'When Irish Eyes are Smiling'? Library of Congress

"When Irish Eyes Are Smiling" is one of the most beloved tunes about the Irish, but was actually written and composed in the United States by songwriters who had strong ties to America's Tin Pan Alley.

Ernest Ball, a native of Ohio, composed the music to the song that was written by Chauncey Olcott and George Graff, Jr. Of the three, only Olcott had any connection to the Emerald Isle - his mother immigrated from Ireland.

"When Irish Eyes are Smiling" has been included in nearly every film about Ireland (Ireland: The Emerald Isle, The Irish in Us, Wild Irish Rose, Top o' the Morning, It's A Great Day For The Irish) and is one of the most frequently recorded Irish songs, with covers from artists such as Bing Crosby, Nelson Eddy, and Ronan Tynan.

Shmoop.com explains how the famous song is tied to the history and evolving opinion toward Irish immigrants in America between 1840 and 1900.

Irish ballads and ditties were hugely popular around the turn of the century and the three writers did not let a little thing like lack of Irish ancestry get in their way when there was such a huge market for Irish music.

During the 1840s, Irish immigration to America increased exponentially due to the Irish Potato Famine. Between 1846 and 1855, nearly 1.5 million Irish people came to the US. The increase in the number of poor and uneducated Irish immigrants in the country made many Americans lash out with “no Irish need apply” signs and cartoons portraying the Irish in ugly, stereotypical ways. Catholic churches weren't spared and were often targets of violence.

Over the course of the 19th century, attitudes toward the Irish slowly evolved. The economic position of the Irish gradually improved and the Irish grew politically more powerful in cities like New York and Boston. If anti-Irish sentiments persisted, by this time it was aimed at the strength and not the weakness of the Irish.

With this larger acceptance of Irish Americans, the commercial popularity of Irish songs increased.

According to Shmoop.com, “When Irish Eyes are Smiling” was largely influenced by the popular vaudeville-era songs of Tin Pan Alley along with the ballads Irish immigrants brought over with them. In turn, the song influenced American singers and songwriters in combining Irish heritage with American culture.