"Minstrel Boy" by Dublin-born Thomas Moore is a fixture at St. Patrick's Day parades and events around the world. 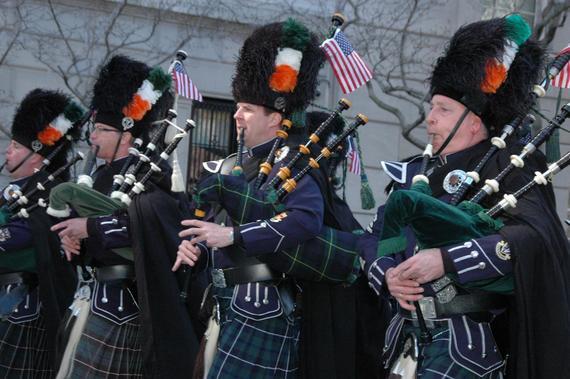 If you've marched on St. Patrick’s Day anywhere in the world, you've likely heard the classic air “The Minstrel Boy” at every one of them, usually performed by a police or firefighter band. The song has become synonymous with Irish America but it has surprising origins.

“The Minstrel Boy” by Dublin-born Thomas Moore is one of the greatest Irish airs, beloved in many countries in the world but arguably nowhere more than America. Apart from “Danny Boy”, it might be the best known of all.

It is hugely associated with firefighters and policemen and is played at their funerals and wakes. It is fitting because the song commemorates a fallen soldier who gave his all for his country.

It was Count John McCormack, the great Irish tenor who ensured its enduring popularity in America.

The song initially gained widespread popularity and became a favorite of many Irishmen who fought during the American Civil War and gained even more popularity after World War I. it is also associated with the Irish Army and with traditionally Irish regiments in the armies of Britain and the United States as well as other armies of the world.

Thomas Moore (1779 - 1852), composer of “The Minstrel Boy” which he set to an old Irish air “Moneen,” was one of the first Catholics to attend Trinity College in Dublin, graduating in 1795 just as the French revolutionary fervor was spreading across Europe.

Moore was a contemporary of Irish rebel Robert Emmet at Trinity College. Moore would have known Emmet and his family.

In fact, “The Minstrel Boy” is a paen to Emmet and the group of idealistic young revolutionaries who took on the might of the British empire with no hope of success in 1803 and to the United Irishmen, who, led by Wolfe Tone, rebelled in 1798.

Though never a revolutionary himself, Moore sympathized greatly with Emmet and Lord Edward FitzGerald, a 1798 martyr as well as Wolfe Tone all of whom he perceived as Irish patriots. The 1798 rebellion and Emmet’s brave insurrection in 1803 happened soon after Moore graduated from Trinity.

He wrote “The Minstrel Boy” to commemorate them and portrayed them as like a naive and idealistic young soldier going forth armed only with his sword and his harp (symbol of Ireland) to fight a far superior foe.

The Minstrel Boy is defeated, but in his last action he takes his harp and tears the strings, ensuring that the enemy shall never hear it praise them if captured.

“Its songs were made for the pure and free

"They shall never sound in slavery”

The song is deeply nationalistic but subtle, reflecting Moore's innermost thoughts at a time when he was a highly-celebrated composer and man of letters in London with several important patrons.

He was even given a colonial office position in Bermuda and, during his time there in 1803, he traveled to the United States and met President Thomas Jefferson.

The meeting did not go well. Moore was very small in stature and Jefferson allegedly wanted to know why such a young boy was sent to meet him.

Moore was not overly popular in America. He wrote in very negative fashion about slavery which offended many of his hosts, but Moore would not change his opinion.

Moore died in 1852, his "Moore’s Melodies" ensured he will never be forgotten, especially with airs such as “The Minstrel Boy” and “The Last Rose of Summer.”

Minstrel Boy, composed by Hans Zimmer, in the movie "Blackhawk Down":

The original lyrics are as follows:

The minstrel boy to the war is gone,

In the ranks of death you'll find him;

His father's sword he has girded on,

And his wild harp slung behind him;

"Though all the world betrays thee,

One sword, at least, thy rights shall guard,

The Minstrel fell! But the foeman's chain

Could not bring that proud soul under;

For he tore its chords asunder;

And said "No chains shall sully thee,

Thou soul of love and bravery!

Thy songs were made for the pure and free

They shall never sound in slavery!"

During the American Civil War a third verse was written by an unknown author, and is sometimes included in renditions of the song:

The Minstrel Boy will return we pray

When we hear the news we all will cheer it,

The minstrel boy will return one day,

Torn perhaps in body, not in spirit.

Then may he play on his harp in peace,

In a world such as heaven intended,

For all the bitterness of man must cease,

And ev'ry battle must be ended.