Documents reveal the British thinking in relation to the IRA ceasefire, the Adams visa, the MacBride Principles, and appointment of Mitchell as special envoy. 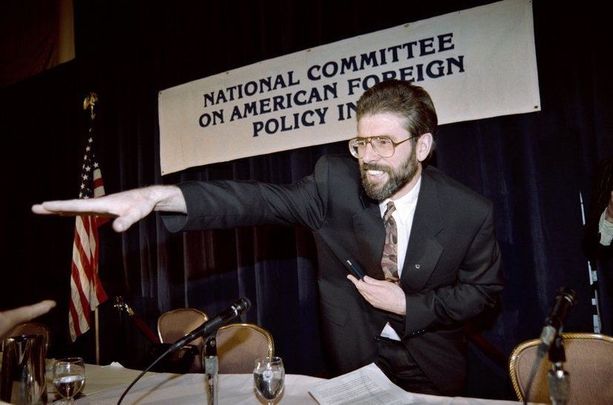 Gerry Adams during his first visit to New York in 1994.

Newly released files in Northern Ireland show the underground war the British waged to stop the Gerry Adams U.S. visa in 1994 and prevent a special U.S. envoy to the North, the job Senator George Mitchell took on which played a huge role in ending the conflict. The documents make clear how hard they tried to prevent one from being appointed.

Those extraordinary lengths reveal a hardline colonial mindset to keep America out of the Irish issue at all costs. The battle against the Adams visa was presented in almost apocalyptic terms as similar to the split between the US and Britain on the Suez Canal issue in 1956.

Regardless, they seemed completely unaware of how shaky their beloved "special relationship" with the US had become under President Bill Clinton.

The Public Records Office of Northern Ireland on June 30 released a flood of documents revealing the British thinking and actions in 1993 and 1994, the critical years when the IRA ceasefire, the Adams visa, the MacBride Principles and appointment of Mitchell as special envoy were all being hotly contested and fought over.

What comes across, frankly, is how clueless in hindsight the much-vaunted British Embassy intelligence was.

They had no intelligence whatsoever from within the Clinton White House and were dependent on public statements and desperate pleas for meetings with National Security Advisor Tony Lake who pretty much ignored them, especially on the Adams visa.

Adams was described as “Goebbels” by a clearly overwrought ambassador who had been utterly outfoxed by the Irish lobby.

The British realized too late that the special relationship would not stop a determined president like Bill Clinton from creating a new Irish policy.  The fact that he had Nancy Soderberg as deputy national security advisor on his staff was highly significant.

She had handled the Irish issue for Senator Ted Kennedy and knew it inside out. She was never impacted by the dire warnings of the British and kept Clinton involved.

The British constant refrain was it would be an incredible mistake to allow Adams into America, which they argued would be seen as talking to terrorists.

The extraordinary reality was that the British were secretly talking to the IRA at the time, a fact that never seems to bother them in their duplicity.

The documents show they were heavily dependent on the then-U.S. Ambassador to the U.K. Raymond Seitz, who carried no weight whatsoever within the Clinton White House where he was long considered to have gone native.

Seitz swore on his Churchill Medal of Honor that he received from the British that the scruffy Adams fellow would never make it to the U.S.

When the Adams visa was granted Seitz practically wet his pants and effectively apologized for his own president's actions.

Similar to Seitz, the U.S. Belfast Consul General Val Martinez was in total lockstep with the British and wound up looking foolish indeed with his dire warning about what would happen if Adams was allowed into America. The groupthink between the British Embassy and the State Department is striking.

Time and again the British sought to block the appointment of a U.S. envoy on the spurious grounds that doing so would allow an outside country to have influence in the North and would upset the delicate balance in the meandering talks that were taking place.

They came up with two strategies, one more ridiculous than the other.

House Speaker Tom Foley, the biggest Anglophile who sat in Congress, was hell-bent on stopping Adams and ending any hope of American involvement in Northern Ireland.

He put forward a cockamamie scheme where he would be the envoy.  He would visit Ireland north and south and report back that all looked well and maybe, just maybe, he’d increase funding for the International Fund for Ireland as a sop.

The Irish government politely told him to go stuff that notion. Indeed the Irish diplomatic corps at the Irish Embassy in Washington, men like Brendan Scannell and later Ambassador Sean O Huiginn, were running rings round their British counterparts.

The second British plan was even more laughable. Frank Costello, a well-known Irish activist and press secretary to Mayor Ray Flynn and later a senior staffer with Congressman Joe Kennedy, kept the British apprised continuously about what was going on, especially in relation to the MacBride Principles and a special envoy. He also claimed to the British that a letter from Clinton to Irish American Congressman Bruce Morrison had been written by the Irish Embassy and this writer.

At one point Costello proposed to defuse the special envoy by making himself be the envoy, attached to the U.S. Consulate in Belfast where he would work on economic development.

Astoundingly the British were prepared to buy into it, thinking it would bury the special envoy for good.

Costello was a disruptive character in Irish America at the time and obviously a frequent visitor at the British Consulate in Boston.  The memos show he was sending Joe Kennedy’s planned statements and resolutions on a special envoy over to the British ahead of time for which they were very grateful.

On a personal note, Irish-born Leonard Doyle, the New York correspondent at the time for the London Independent, was supplying information from New York and was keeping an eye on me and some others for his British friends, and is often mentioned in dispatches. Now I know why he was always looking to meet up and drop by.

In the end, despite the huffing and puffing and spying and lying the British were routed.  Adams got his visa, Mitchell became the envoy and the IRA ceasefire happened followed by the Good Friday Agreement.

The British had badly underestimated the Irish American lobby and they paid the price. If Clinton has listened to them there would likely still be conflict in Northern Ireland.