US is “central to success of Northern Ireland,” NI Secretary of State says

Northern Ireland's Secretary of State Brandon Lewis said he is "struck" by the US and UK's "shared interests and passions for the Good Friday Agreement." 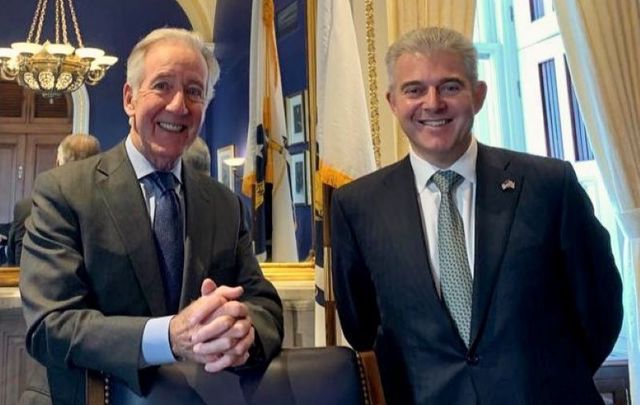 Northern Ireland's Secretary of State Brandon Lewis is in Washington, DC this week to "reaffirm" the UK's commitment to the Good Friday Agreement while also calling for "urgent" solutions to Brexit's Northern Ireland Protocol.

Lewis, who is meeting with politicians and stakeholders in Washington this week, said on Wednesday amidst his engagements that “the United States is central to the success of Northern Ireland.”

The United States is central to the success of NI and I was pleased to speak with @KDonfried, Dereck Hogan and Doug Jones today on a range of related matters. I thank our American partners for their shared interest in NI’s peace, prosperity and stability.

In a video shared on Twitter marking the start of his visit to Washington on Wednesday, Lewis said: “Whenever I’m here in the United States, I’m always struck by our two countries' shared interests and passions for the Good Friday Agreement and the future of Northern Ireland.”

He made note of the DUP’s recent decision to withdraw First Minister Paul Givan from the Executive, calling it “extremely disappointing” and not reflective of “the genuine progress that Northern Ireland has seen over recent years.”

He continued: “To build a brighter future, Northern Ireland needs a return to stable, devolved government while we fix the problems in the Protocol - safeguarding peace, respecting all communities in Northern Ireland.”

He concluded: “A strong relationship with the United States is central to the success of Northern Ireland; it has been for many years. I look forward through the rest of my trip to building on our partnership to build Northern Ireland’s future stability and prosperity to ensure that everyone in Northern Ireland has a prosperous, exciting future.”

I’m in the United States, where I am looking forward to to engaging with stakeholders, promoting and representing Northern Ireland's interests??? pic.twitter.com/QoXzllGgLv

After their meeting, Congressman Neal, who sits on the Friends of Ireland Caucus, said: “We share the same vision for the future of Ireland and commitment to upholding the historic peace accord, the Good Friday Agreement.”

Thank you to @BrandonLewis for meeting with me today. We share the same vision for the future of Ireland and commitment to upholding the historic peace accord, the Good Friday Agreement. https://t.co/IGpVh1iopj

Lewis said he engaged in a “productive” discussion where he updated Senator Murphy on Northern Ireland.

A productive discussion with @ChrisMurphyCT, updating him on NI & my absolute priority to see a return of the First Minister to the Executive. I thank Senator Murphy for his continued commitment to building a prosperous, safer NI. pic.twitter.com/tez60xFy0k

Lewis also met with Karen Pierce, British Ambassador to the US, as well as the Atlantic Council, where he outlined the UK government's "priority to find practical solutions to the Protocol."

Speaking with @AtlanticCouncil I outlined the UK Government’s priority to find practical solutions to the Protocol, allowing people and businesses to take advantage of economic opportunities and build a forward looking NI. https://t.co/d16AOaA9N5