Paul Givan steps down as NI First Minister over Protocol 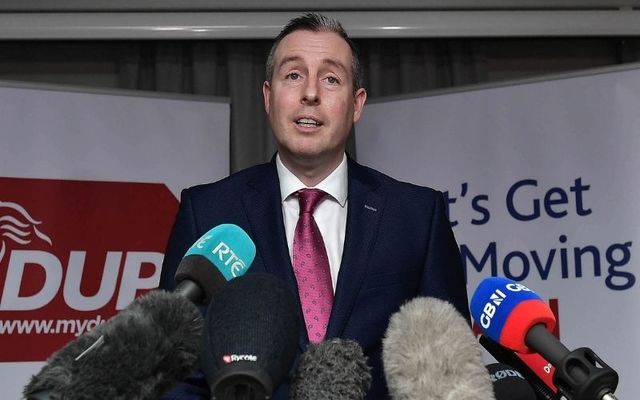 Other ministers are expected to remain in place to oversee their departments, but the Northern Ireland Executive can no longer meet or take significant policy decisions.

Givan, who had served as First Minister for just eight months, announced his resignation in a statement on Thursday.

"Today marks the end of what has been the privilege of my lifetime - to serve as the First Minister of Northern Ireland," the Lagan Valley MLA said in a statement.

"When I first entered the Assembly 12 years ago, I never expected to have the opportunity to lead the government and serve the people of Northern Ireland as first minister.

"Holding this office is one that comes with a heavy responsibility and I have often felt the weight of this burden, to do what is right for all out people."

The privilege of my life time to serve the people of Northern Ireland. Thank you. pic.twitter.com/2NrXMrKDAq

Speaking after Givan's resignation, DUP leader Sir Jeffrey Donaldson said that the Northern Ireland Protocol "represents an existential threat to the future of Northern Ireland's place within the Union".

Donaldson has hinted for months that he may ask Givan to resign if a dispute over the Protocol was not resolved to the satisfaction of the unionist community in Northern Ireland.

Meanwhile, Givan claimed  "events in Northern Ireland are teetering on the brink".

The resignaton has received widespread condemnation from political figures in Ireland and Great Britain.

"I urge them to reinstate the First Minister immediately to ensure the necessary delivery of public services for the citizens of Northern Ireland." Lewis said in a statement.

Sinn Féin President Mary Lou McDonald said it is a "disgrace" that the DUP is threatening to pull down power-sharing and called for an early Stormont election to take place.

The next Stormont elections are currently due to take place on May 5.

"Michelle O'Neill has been in contact with other party leaders, calling for a meeting to ensure that any legislation that can be dealt with within the Assembly precedes as quickly as is possible," McDonald said.

Poots said the decision would apply to certain agri-food goods traveling from Great Britain to Northern Ireland and added that he had received legal counsel stating that there was "presently no Executive approval" for sanitary and phytosanitary checks.

The move was condemned by the Irish Government, with Minister for Foreign Affairs Simon Coveney describing it as a "breach of international law".

However, customs checks continued on Thursday and a spokesperson for Prime Minister Boris Johnson told Sky News that Johnson wants the checks to continue while talks progress with the European Union.