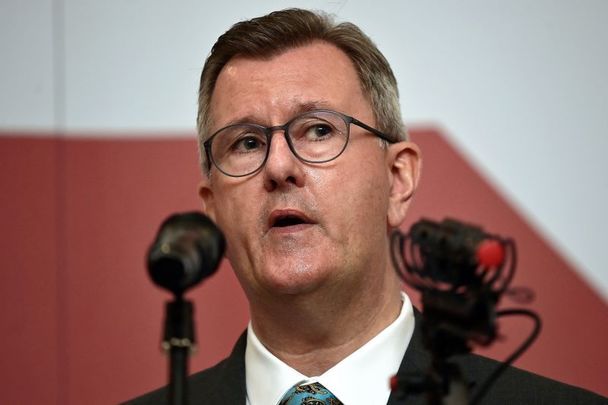 Donaldson has put the pressure on Truss for a formal deadline to end negotiations with the EU. She is still settling into the job less than three weeks after taking it up following the resignation of former Brexit boss Lord David Frost.

Donaldson’s warning came days after the EU’s chief negotiator Maroš Šefčovič claimed to German publication Der Spiegel that London had “breached a great deal of trust” with Europe over the Protocol which is designed to maintain a free-flowing land border on the island of Ireland after Brexit.

Donaldson told the Sunday Telegraph, “It is crucial that Liz Truss moves this process forward quickly and that we get real and meaningful progress on a range of issues, not least of which is removing the checks on the movement of goods within the United Kingdom internal market.”

He would not specify a reasonable deadline for Truss to make progress, but said, “January is going to be an absolutely crucial month.”

He added, “If we don’t get rapid and decisive progress, and one side or the other is kicking the can down the road, this will have major implications for the stability of the political institutions in Northern Ireland.”

That comment was viewed as a suggestion that the DUP could seek to collapse Stormont by the start of next month if the U.K. and the EU do not manage to secure an agreement.

There is cautious expectation within the Irish government that Truss’s appointment to the Brexit post, in addition to continuing as British foreign secretary, could be a boost for the EU-U.K. negotiations after Frost’s obstinacy over the protocol.

Additionally, Šefčovič told Der Spiegel he is “pragmatic” about Truss taking on responsibility for post-Brexit negotiations after a brief pre-Christmas phone talk with her.

But Šefčovič also warned if Truss was to trigger Article 16, a move that would effectively unilaterally suspend the treaty agreed between the U.K. and the EU, it would throw into jeopardy “the foundation of the entire deal” reached between the two sides.

Truss, a likely candidate for future Tory leadership, has said she remains prepared to invoke Article 16 if issues are not resolved.