The prospects of a Brexit deal on the Northern Ireland Protocol increased dramatically on Saturday with the resignation of Britain’s Chief Negotiator Lord David Frost. 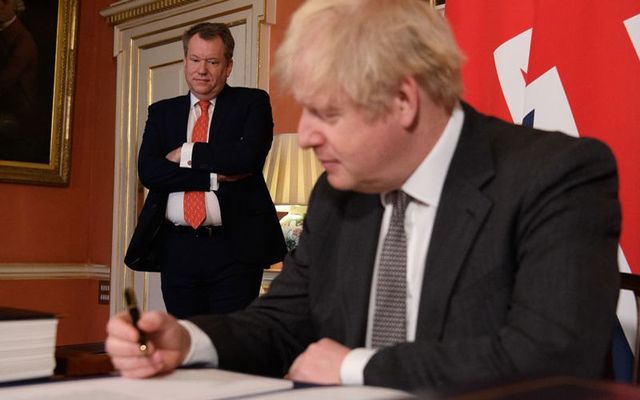 In a shock move, Britain’s Brexit negotiator, Lord David Frost, 56, has quit after falling out with Boris Johnson.

The prospects of a Brexit deal on the Northern Ireland Protocol increased dramatically on Saturday with the resignation of Britain’s Chief Negotiator Lord David Frost over frustration with the policies of Prime Minister Boris Johnson.

In recent weeks  Britain  has appeared to soften its approach to the Protocol and now Frost’s departure makes it more likely that a deal can be reached.

Frost had been driving a very hard line with the European Union, on several occasions threatening  to bring in a unilateral Brexit policy that could have led to a return of the physical Irish border.

He also went back on previous guarantees negotiated and voted upon by his predecessors and himself which caused consternation and combative exchanges between Britain and Ireland.

The Irish government in particular, will be delighted to see Frost gone, considering him an utterly unreliable negotiator who was constantly changing the ground rules.

The Frost resignation completed a dreadful week for Johnson, who is under fierce attack from members of his own party as well as the media on several fronts.

Video taken of Christmas parties at Number 10 Downing Street last Christmas at a time when the government was cracking down on any social events revealed Johnson as a complete hypocrite on the issue.

Then the party vote dropped by a whopping 35 percent in a by-election in Shropshire and  they lost one of their safest seats in the parliament, which had voted Tory for over 100 years, to the Liberal Democrats.

Johnson is also facing resistance from the right on his Covid policy as he moves towards business closures and a crackdown on social events.

There is strong sentiment among his own backbenchers that Johnson is lurching from crisis to crisis and unable or unwilling to lead the country properly. Opinion polls show the Labour Party going ahead of the Torys for the first time since Johnson took over.

Baroness Chapman of Darlington, Labor’s shadow minister at the Cabinet Office, told The Sunday Times of London that: “The government is in chaos. The country needs leadership, not a lame duck PM who has lost the faith of his MPs and cabinet.

“Boris Johnson needs to get a grip, tell us his plan for the next few weeks and bring certainty for the people of Northern Ireland by unblocking the stalemate over the protocol.”