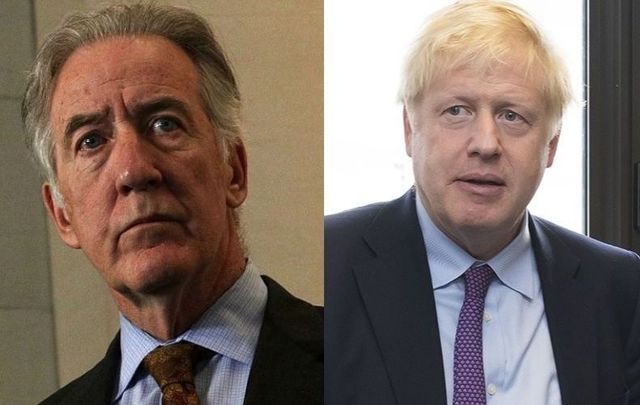 Congressman Neal said in a statement on Wednesday that he had a "lengthy discussion" with Prime Minister Johnson on a range of issues, "including the UK proposal to revise the Northern Ireland Protocol and how best to address the legacy of the past on the island of Ireland."

In a statement, Neal said; “As Chairman of the House Committee on Ways and Means, I shared my strong belief that any agreement reached between the UK and the EU on the future of the Protocol must not undermine the integrity of the Good Friday Agreement nor threaten the institutions it created.

“Having worked with five British Prime Ministers throughout the peace process, I reminded Prime Minister Johnson that everyone had to make sacrifices to achieve this historic accord, and that 23 years later it remains a template for successful conflict resolution around the globe.

“The Prime Minister assured me there would be no return to a hard border on the island of Ireland and that the UK government remains committed to the full implementation of the 1998 peace deal and the political stability it has brought to the region.”

Today I met with the Prime Minister of the United Kingdom Boris Johnson. My statement following that meeting here ➡️ https://t.co/0bEn4GxReS pic.twitter.com/G6dXT69Zcb

Neal separately told The Irish Times after the meeting: “The point here is not so much the trade agreement, because I think that most of us believe that a trade agreement of some sort with the UK would be desirable, but I think until the issue of the Protocol and Brexit are resolved, offering no threat to the success of the Good Friday Agreement, I don’t see how they can be entertained."

Representative Neal is the head of the Ways and Means Committee, which is largely responsible for dictating international trade policy for the US. In the wake of Brexit, a new US-UK trade deal will need to be brokered as the UK is no longer part of the European Union.

However, with ongoing talks regarding the implementation of the Northern Ireland Protocol, a piece of Brexit that aims to keep Northern Ireland in both the United Kingdom's customs territory and the EU's single market, there remains a potential threat to the Good Friday Agreement, which prevents a hard border on the island of Ireland.

Neal’s meeting with Johnson was held the day after Johnson met with US President Joe Biden, also in Washington, DC.

In a press briefing after Johnson and Biden’s meeting, Biden was asked if he has taken a different approach to President Trump in regards to the US-UK trade deal "because of your heritage, your concern about the Irish Protocol?"

Biden responded: “They’re two separate issues. On the deal with the UK, that’s continuing to be discussed. But on the protocols, I feel very strongly about those.

“We spent an enormous amount of time and effort in the United States, it was a major bipartisan effort made. And I would not at all like to see — nor, I might add, would many of my Republican colleagues like to see — a change in the Irish accords that — the end result having a closed border again.”

Prime Minister Johnson added: “That is absolutely right. And I — on that point, Joe, you know, we are completely at one.

Biden and Neal, who have both previously signaled their unwavering support for the Good Friday Agreement, join other top-level US politicians, including Speaker of the House Nancy Pelosi and Senate Majority Leader Chuck Schumer, who have reiterated their stance on protecting the 1998 accord recently.