Have you read the Good Friday Agreement? GFA Explained wants to help you understand the 1998 accord that brought peace to Northern Ireland. 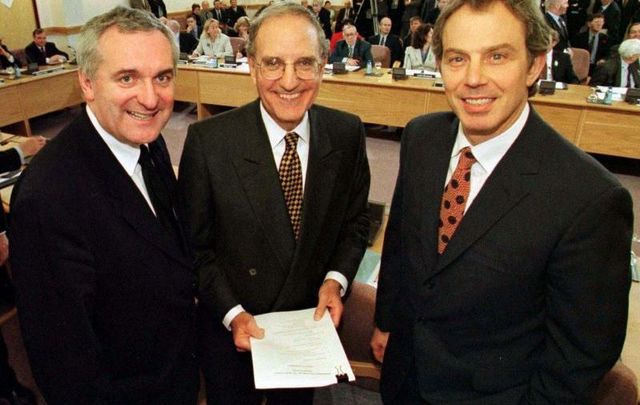 April 10, 1998: Taoiseach Bertie Ahern, Senator George Mitchell, and British Prime Minister Tony Blair at Castle Buildings Belfast, after they signed the peace agreement that will allow the people of Northern Ireland to decide their future. RollingNews.ie

GFA Explained uses videos to break down the key provisions of the 1998 Good Friday Agreement.

Activist Emma DeSouza, Oxford academic Dr. Jennifer Cassidy, and journalist Susan McKay have teamed up to present GFA Explained, a new online resource that presents the full text of the Good Friday Agreement accompanied by videos of each of the experts discussing "the key components of the historic text that shapes the past, present and future of Ireland and the UK."

Have you read the Good Friday Agreement? Delighted to launch this new website in which @SusanMcKay15 & @OxfordDiplomat join me in explaining the key provisions.

DeSouza, who previously mounted a successful legal challenge against the UK Home Office for her right to identify as Irish, told IrishCentral: “Education remains a wholly under-utilised tool in tackling sectarianism.

"Reconciliation requires constant work as the recent violent scenes in Northern Ireland have so painfully demonstrated.

“It's imperative that two decades on from the Good Friday Agreement we don't lose sight of what’s at stake and what was achieved.

“I hope that this online resource can be used as an educational tool and as a reminder of the work that lies ahead.”

In presenting their virtual explainer, the trio, all natives of Northern Ireland, says that the 35-page Good Friday Agreement “has achieved 23 years of peace, bringing an end to the 30-year conflict that was the Troubles in Northern Ireland and allowing a generation to grow up in peace.

“However, those 'peace babies' come of age in a time when the Good Friday Agreement is under strain.

“While the international peace agreement became a critical component in EU and Brexit negotiations, many people, including the UK's foreign secretary Dominic Raab, have admitted to not having read it in full.

“And at the same time support for a border poll grows in the South, one in four young people from the Republic, when polled, said they 'didn't know' if they support it.”

Dr. Cassidy breaks down the Parity of Esteem and Power Sharing, while McKay explains the Acknowledging the Suffering of Victims; Decommissioning of Arms; Policing: Free from Political Control; Prisoners Early Release; and Enacting the Agreement and its Absences.