We can't take Northern Ireland peace for granted any more

The Belfast riots have left dozens of police officers injured, but they have also been a reality check for people who thought peace in Northern Ireland was a foregone conclusion. 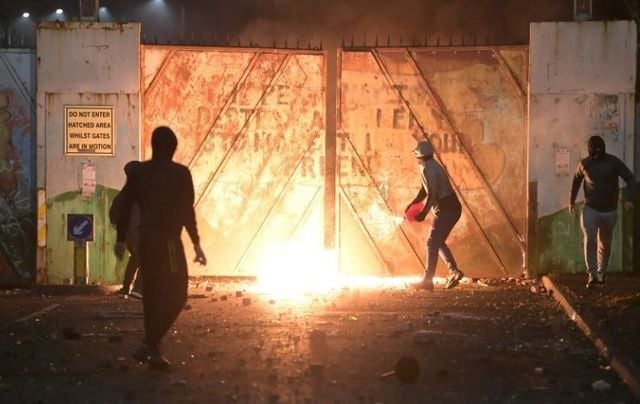 As Belfast smolders in the wake of 10 days of continuous rioting, it has become abundantly clear that peace in Northern Ireland has become increasingly fragile in recent years and that a United Ireland is far from a sure thing.

Looking on from the Republic of Ireland having never truly experienced the Troubles, I have naively taken peace in Northern Ireland for granted by assuming that a United Ireland within the next ten years is almost a foregone conclusion.

However, this past week has been an eye-opener, reminding me of my ignorance toward one of the most troubling conflicts this island has ever seen.

I was born on the same day as the IRA bombing of the London docklands in 1996 - a horrific incident that killed two people, caused an estimated £150 million worth of damage, and ended a 17-month IRA ceasefire. However, my experience of conflict in Northern Ireland has generally been limited to school textbooks and archive footage.

I obviously have no recollection of that IRA bombing, while I also have no memory of the shocking Omagh Bombing in 1998 or the historic signing of the Good Friday Agreement in the same year.

Instead, I have seen sporadic incidents of violence in Northern Ireland over the past 20 years of my conscious life, and so I have viewed the conflict from before I was born and the relative peace that followed as two entirely separate events, rather than as two intertwined pieces of a very complicated story.

I was too young to comprehend the disgusting and unsavory scenes in the Ardoyne area of Belfast in 2001 when bigoted loyalists terrorized young nationalist children as they made their way to school through a unionist area and so I can only recall isolated incidents of violence like the one-day Dublin riots in 2006 or the cowardly murder of journalist Lyra McKee by dissident republicans in 2019.

Otherwise, I have been sheltered from the legacy of the Troubles while looking on at these isolated incidents from the safety of my Dublin home - the same goes for many of my generation.

Trips to Belfast or the Giants' Causeway have been remarkably easy to undertake in the absence of a hard border, while I have only ever witnessed the occasional relic of the 30-year conflict. These relics could be anything from barbed wire running around an Armagh GAA stadium to Northern Irish people's tendency to return to their homes at an unusually early hour out of a lingering fear of being in the wrong place at the wrong time.

I have, therefore, spent most of my life in blissful ignorance of the complexities of Northern Ireland. I was certainly aware of the region's troubled history - more aware than most my age - but I had convinced myself that the days of bombings and shootings had been confined to the past with the signing of the Good Friday Agreement.

In March last year, for example, with Ireland and Northern Ireland seemingly on a collision course in a qualification competition for the European soccer championships, I hoped and prayed for the game to come to fruition so that I could travel to Belfast for a hugely emotional and atmospheric night at Windsor Park.

Yes, the atmosphere would be highly charged, but I reasoned with myself that there would be no crowd trouble in a now-peaceful Northern Ireland and that the game would be one of the truly great nights in Irish soccer history if Ireland managed to win.

My dad, on the other hand, hoped for anything but a meeting between the teams. After all, he had lived through an era when Belfast was a no-go area for Irish soccer fans, who were forced to watch from the safety of their own homes as Ireland played Northern Ireland in Belfast for a place at the 1994 World Cup.

Back then, tensions were so poisonous that the Irish national anthem had to be put on the back-burners out of fear of inciting a riot, while there was venom in the air when Alan McLoughlin scored to send Ireland to the World Cup finals in the USA.

I foolishly believed that such incidents were ancient history.

Having witnessed the riots over the past ten days, I have now come to realize that my dad's misgivings about a potential match-up were well-founded because the old tensions have never truly gone away in Northern Ireland, only temporarily disappearing from the limelight long enough to lull people my age or younger into a false sense of security.

Younger generations have undeniably taken the fragile peace brokered by the Good Friday Agreement for granted. But it has only ever been a fragile peace; a thin line in the sand holding back centuries of hate and bitterness and it is certainly not irreversible as the last ten days have sadly highlighted.

The fallout from the Brexit referendum in 2016 have caused tensions in Northern Ireland to bubble beneath the surface for years and, as it transpired, it didn't take much

What is perhaps most worrisome about this bout of violence is the age of those participating in the riots. Most of the loyalist rioters are nothing more than teenagers, while some are as young as 13 or 14.

Most rioters are younger than the Good Friday Agreement and have known nothing but peace and reconciliation in the north. That has existed only in name, however, as was showcased by the dozens of loyalist parents who proudly egged their children on as they did their level best to destroy three decades' worth of healing.

There is only one way that these young rioters could ever feel such resentment and hate; they have grown up learning it from embittered parents who have not forgiven or forgotten despite years of attempts to bridge the divide.

Problems for a United Ireland

The unsavory scenes of the past ten days have not just showcased the fragile peace in Northern Ireland; they have also highlighted just how far a United Ireland is from becoming a reality.

If loyalist communities can be whipped into such a frenzy over the breach of coronavirus restrictions last year or a few minor trade barriers between Northern Ireland and Great Britain, how do you think they're going to react if talks surrounding a border poll grow louder?

Loyalist anger effectively boils down to fears over Northern Ireland's position in the United Kingdom; how do you think they'll react if those fears become a reality?

This is a community that has been reluctant to give nationalists an inch in the 100-year history of Northern Ireland and their ancestors fought tooth and nail to maintain the status quo in the region by ensuring unionist control of councils, housing, education, employment, and pretty much every sector of Northern Irish life.

They have only begrudgingly yielded concessions to nationalists in the last 30 years and they are not about to suddenly allow nationalists to achieve their deepest desires without putting up a major fight.

Many will have to be dragged, kicking and screaming, if a United Ireland is to come to pass. Some will come quietly, but others will undoubtedly resort to violence and the extent of that violence and unrest will very much depend on the Irish Government.

Efforts must be made to placate embittered unionist communities throughout Northern Ireland. Despite representing peace between Catholics and Protestants, the tricolor will have to go as it is too inflammatory for communities in Northern Ireland, while we will also have to find an alternative to Amhrán na bhFiann as a national anthem.

Drastic changes must also be made to areas like the Irish healthcare system because who in their right mind - nationalist or unionist - would choose to abandon the NHS for the shambolic HSE?

In summary, the unionist community in Northern Ireland has tangible concerns about a United Ireland and what it would mean for their identity. The unpalatable scenes over the last 10 days have indicated that their resentment and hatred has not abated in the relative peace following the Good Friday Agreement, while they have also showcased that the threat of violence will never be far from the surface if the island of Ireland moves towards unification.

The re-emergence of shadowy loyalist paramilitaries in recent weeks has also been a deep cause for concern and there is a very real threat that violence will be far worse than a spate of unsavory riots if Northern Ireland votes to join the Republic.

The riots indicate that old wounds run very deep in Northern Irish communities and that a United Ireland is far further from reality than a lot of people in the Republic would like to admit.