27 cops and eight civilians injured as three nights of violence break out in Northern Ireland due to tensions rising over Brexit and Sinn Féin. 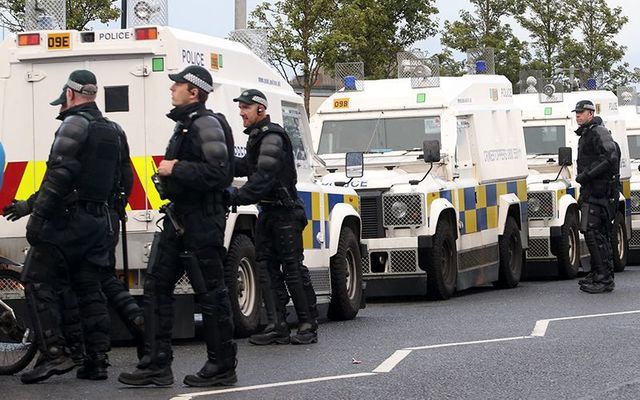 For three nights the police in Northern Ireland have been under attack as gangs in loyalist areas sporadically resorted to violence, throwing petrol bombs and bricks at the PSNI.

On Sunday night petrol bombs were thrown at police officers and bins set alight in Carrickfergus, County Antrim. In Newtownabbey, police were attacked with bricks and bottles for the second night in a row.

On Friday, in Belfast 27 polices officers were injured. On Saturday night there were further disturbances in Newtownabbey, on the outskirts of Belfast. Three vehicles were hijacked and set alight and thirty petrol bombs being thrown at police, at Cloughfern roundabout in the O'Neill Road area, the BBC reports.

The violence was described as an "orchestrated attack on police".

Derry City and Strabane Area Commander, Chief Superintendent Darrin Jones said that of Saturday night, "Again, we saw our officers targeted, pelted with petrol bombs and masonry in the Dungiven Road area where pallets were placed on the road and set alight."

Speaking to RTE he added that it was "shocking that some of those involved in last night's disorder were children, some as young as 12 years old along with others up to 18 years old and a mix of male and females.

"It is totally unacceptable, and it is crucial we send out a message to those responsible that such behavior cannot be tolerated. People deserve to feel safe within their own homes and be able to walk the streets without fear."

RTE reported on Monday morning at eight people have already been arrested.

The Chairman of the Police Federation of Northern Ireland, Mark Lindsay, said police believe the rank-and-file officers "do not feel that they deserve this sort of treatment".

Speaking to BBC Radio 5 Live he called the attached "very disappointing". He said the police are "still on the receiving end of petrol bombs and heavy masonry."

Tensions have risen within the loyalist community of Northern Ireland in recent months over post-Brexit trading arrangements,  that have been claimed to have created barriers between Northern Ireland and the rest of the United Kingdom.

Also, last week it emerged that prosecutors would not charge anyone, including leading Sinn Fein politicians, with relation to attending the funeral of republic Bobby Storey, despite COVID lockdown rules in place at the time. This news led to unionist politicians calling on the Police Service of Northern Ireland's (PSNI) Chief Constable Simon Byrne to resign.

Linsay told the BBC on Sunday night that the PSNI had been "thrown into the middle of multiple political arguments."

He said some of the COVID regulations "pitted police against communities basically".

Also speaking with BBC Radio 5 Live, Alliance MLA John Blair said "We appeal and stick to a cessation of talking up tension... anger, and violence directed towards police is not unrelated to the fact that political unionism has spent the best part of a week challenging the authority of the chief constable.

He said "Those attacking the police should stop.

"Rioting and injuring rank and file officers will only result in young people being criminalized."

He went on to criticize Sinn Féin Members of the Legislative Assembly, Gerry Kelly, for comments he had made about the violence.

Kerry had said the riots were "a direct consequence of the actions of political unionism" and accused "DUP rhetoric" of sending a "very dangerous message to young people in loyalist areas".

Campbell accused Kelly and the Sinn Fein party of "arrogance" in "not recognizing the major part they played in creating" this anger in the community.

He said "Sinn Féin helped organize an IRA man's funeral where 2,000 people attended when other people couldn't even have some of their own children at the funeral of a loved one.

"Gerry Kelly and co need to get real. People aren't taps that some politician can turn on or off.

"Riots on the streets, just as they must be condemned, it also has to be realized that they are a symptom of the manner in which Sinn Féin has played fast and loose with the Covid rules whilst zealously demanding everyone else obey them."