The "Justice 4 Lyra" campaign encourages people to come forward with any information about the murder of 29-year-old Lyra McKee in Derry in 2019. 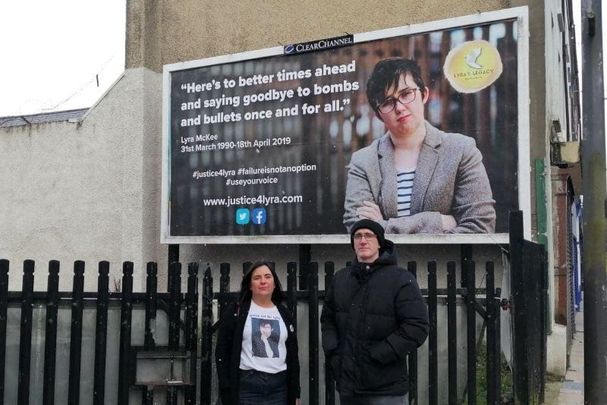 The family of Lyra McKee, the journalist who was shot and killed during a night of violence in the Creggan area of Co Derry on April 18, 2019, has launched the “Justice 4 Lyra” campaign encouraging people to come forward with any information about the events of that led to her death.

In a statement, McKee’s family said: “Can you imagine what it feels like to know that the police know the identity of your sister's killer yet they continue to walk free?

“Can you imagine what it feels like to know that 'the dogs on the street' know the identity of your sister's killer, but you do not?”

McKee’s family says the purpose of their Justice 4 Lyra campaign is “to encourage anyone with any information or any video footage that could lead to the arrest and conviction of all those responsible for our sister's murder to come forward.”

As part of the campaign, McKee’s relatives have unveiled billboards around Derry City this week calling for any pertinent information about the journalist’s murder.

The billboards feature a quote from McKee which says “Here’s to better times ahead and saying goodbye to bombs and bullets once and for all.”

Our family have had billboards erected at 3different locations in Derry,where Lyra was murdered almost 2 yrs ago. Using Lyra’s positive message for our country, we encourage people who have information that could lead to the arrest/conviction of the gunman to come forward. pic.twitter.com/nnvkeOV8cO

In a video filmed beside one of the billboards, Lyra's sisters say: "Almost two years ago, our Lyra was shot dead in this city.

"The person who shot her continues to walk free.

"We need you to share the information that you know so that Lyra can have justice.

"Please, use your voice, speak out for Lyra."

McKee’s family says that on April 18, 2019, McKee, 29, had been observing a riotous scene that was unfolding on Fanad Drive in the Creggan area of Derry in Northern Ireland. She was standing with a group of residents, including her partner Sara Canning, beside a police vehicle when a masked gunman shot his weapon directly towards the onlookers.

“One bullet struck our sister in the head and she was killed,” McKee’s family says in their new appeal.

While the "New Irish Republican Army" made a public statement claiming responsibility for Lyra's murder, the gunman remains free.

“A number of people had been arrested and questioned and two were charged with offences connected to Lyra's murder," McKee's family says.

"Despite over 150 brave local people coming forward with information and video footage to the police, the gunman has yet to be brought to justice.”

McKee’s family noted that her murder “sparked international outrage and played a pivotal role in encouraging our politicians to return to power-sharing governance that emerged following the 1998 Good Friday Agreement.”

They further added that they promised Lyra’s mother, who “died of a broken heart” on March 10, 2020, that they would “continue to fight until justice is secured for Lyra.”