On the same day that Nancy Pelosi visited Derry to speak about the Northern Ireland peace process, Lyra McKee was shot dead by militant republicans in the Catholic neighborhood of Creggan 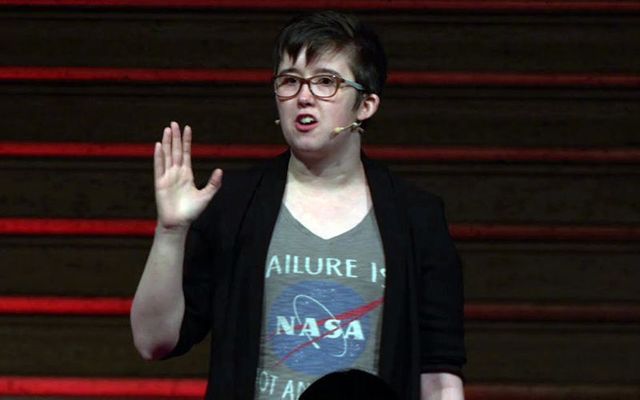 Belfast journalist Lyra McKee was shot dead by militant republicans in the Catholic neighborhood of Creggan the same day that Nancy Pelosi visited Derry to speak about the Northern Ireland peace process.

Northern Irish police believe that the “New IRA” is responsible for the riots in Derry and the murder of journalist Lyra McKee (29), who was shot while reporting on the violent unrest in the Creggan area. The Police Service of Northern Ireland is treating the incident as an act of terrorism.

“We are treating this as a terrorist incident, and we have launched a murder inquiry,” Mark Hamilton, an assistant chief constable, told a news briefing.

“At this stage, we believe her murder was carried out by a violent dissident republican.

“Our assessment at this time would be that the New I.R.A. are most likely to be the ones behind this.”

The New IRA is a militant republican group formed several years ago, by the merging of several splinter groups.

The violence occurred after police carried out searches for firearms and explosives the police service believed were being hidden by militant republicans in the heavily Catholic area of Derry.

Police report that over 50 people were involved in the violence, including throwing petrol bombs. McKee was shot by a gunman firing in the direction of the police.

A journalist has been killed covering riots in Derry. Her name was Lyra McKee. She was 29. She recently signed a two-book deal with Faber, who called her a "rising star of investigative journalism". This is her last tweet, sent from the scene of the unrest. pic.twitter.com/0gk1Fa7Du0

Journalist Leona O'Neill was at the scene and tweeted that she called an ambulance for McKee.

O’Neill tweeted: "I was standing beside this young woman when she fell beside a police Land Rover tonight in Creggan #Derry.

"I called an ambulance for her but police put her in the back of their vehicle and rushed her to hospital where she died. Just 29 years old. Sick to my stomach tonight."

Northern Ireland has not had a functioning government for over two years since the collapse of the power-sharing agreement at Stormont. The violence and death of Lyra McKee comes 21 years after the signing of the Good Friday Agreement, a resolution to the peace process, and midst negotiation over the United Kingdom’s border with the Republic of Ireland due to Brexit. This violence is also of grave concern follow the delivery of packages containing explosives to the University of Glasgow and three London transport hubs, including Heathrow Airport.

Chief Constable Hamilton said, “It’s important that we all stand together now and resist any further escalation of this [violence].”

The leader of the leading political parties in Northern Ireland - Michelle O'Neill of Sinn Féin, Arlene Foster of DUP, Robin Swann of UUP, Colum Eastwood of the SDLP, Naomi Long of Alliance and Clare Bailey of the Green Party – released a statement the morning after McKee’s murder.

“We want to express our condemnation in the strongest terms possible at the murder of journalist Lyra McKee.

"The murder of Lyra McKee is first and foremost a devastating loss for her grieving partner, family, and friends, and our thoughts are with them at this awful time.

"Lyra’s murder was also an attack on all the people of this community, an attack on the peace and democratic processes.

"It was a pointless and futile act to destroy the progress made over the last 20 years, which has the overwhelming support of people everywhere.

"We are united in rejecting those responsible for this heinous crime.

"They have no support in the community, must be brought to justice and should disband immediately.

"We reiterate our support for the PSNI, who while carrying out their duties were also the target of last night’s attack. We call on anyone with any information to bring that forward to the police and assist their inquiries.

"This is a time for calm heads.”

A journalist was shot dead in Derry last night. A delegation of US politicians, including House of Representatives speaker Nancy Pelosi, visits a non-functioning Stormont today.

Today is Good Friday. Northern Ireland and the family of Lyra Mckee deserve better than this.

Who was Lyra McKee

McKee, an investigative journalist from Belfast, was recognized by Forbes magazine, in 2016, as one of its “30 Under 30 Europe” for digging “into topics that others don’t care about.”

She worked as an editor for the website Mediagazer since 2011. She had also written for BuzzFeed News and Mosaic Science.

Her article “Letter To My 14-Year-Old Self,” was widely read online and made into a short film. It documented the abuse and support she experienced growing up gay.

McKee’s work often examined the legacies of The Troubles in Northern Ireland. The 29-year-old journalist wrote a book, “Angels With Blue Faces,” about the 1981 murder of Rev. Robert Bradford, a member of the British Parliament from Belfast.

In 2018 McKee signed a two-book deal with the publishing house Faber & Faber. One of those books, “The Lost Boys,” investigates the disappearances of young men in Belfast in the late 1960s and 1970s. It is scheduled for release in 2020.

"The people of Ireland will have heard with both shock, outrage and great sadness of the killing of the young journalist Lyra McKee in Derry last evening - a woman of talent and commitment, who was shot exercising her profession.

"Sabina and I send our deepest sympathies to her family and friends and to all those who knew her and worked with her."

Lyra McKee was dedicated to covering the lasting trauma & violence of the Troubles. Devastating to hear she was killed tonight by that same violence.

I was Lyra’s editor on this story, and it was an honor. Sharing her work now is all I can think to do. https://t.co/conwNzyjnF

"The Government condemns in the strongest possible terms the fatal shooting of journalist and writer Lyra McKee in Derry.

"We are all full of sadness after last night's events.

"We cannot allow those who want to propagate violence, fear and hate to drag us back to the past.

"I would like to express my sincere condolences to Lyra's family, her partner Sara and her friends.

"Our solidarity also goes out to the people of Derry and to the entire journalism community."

This is the brilliant journalist, Lyra McKee, who was murdered in Derry last night.

She gave a TED Talk on tolerance. Watch and share in her memory. https://t.co/fCWTEm2ElA

On this Good Friday morning & on the eve of Easter may Lyra McKee b the last to die as she did. Those involved are not the IRA. The IRA embraced peace. It is gone. No Republican can support the anti peace gangs masquerading as the IRA They should disband.

The person who shot Lyra McKee was probably no older than she was, there’s a dangerous radicalisation of young people in Derry by those linked to and on the periphery of the New IRA, they should be ashamed of what they are doing to the city and its younger generation

Should this apparent escalation in violence among militant republicans see Northen Ireland's politicians working to restore a working government? Let us know your views below.