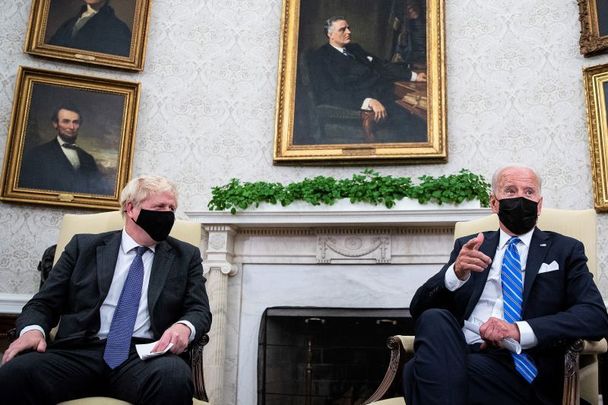 September 21, 2021: UK Prime Minister Boris Johnson and US President Joe Biden in the Oval Office of the White House in Washington, DC. Johnson made a 24-hour visit to Washington to meet with the President, Vice President and congressional leaders, while in the United States to attend the U.N. General Assembly. Getty Images

UK Prime Minister Boris Johnson and US President Joe Biden met yesterday, September 21, at the White House. On their agenda, of course, was the possibility of a UK-US trade deal, which many US politicians, including Biden, have asserted will not happen if the Good Friday Agreement is threatened in the midst of Brexit and its Northern Ireland Protocol.

At the end of their press briefing on Tuesday, one British reporter asked: "President Biden, President Trump said that the UK was in front of the queue when it came to a trade deal. You seem to have a different approach. Is that because of your heritage, your concern about the Irish Protocol? Is that what’s holding it back when it comes to doing this deal with the UK?"

Biden responded: “They’re two separate issues. On the deal with the UK, that’s continuing to be discussed. But on the protocols, I feel very strongly about those.

“We spent an enormous amount of time and effort in the United States, it was a major bipartisan effort made. And I would not at all like to see — nor, I might add, would many of my Republican colleagues like to see — a change in the Irish accords that — the end result having a closed border again.”

Prime Minister Johnson added: “That is absolutely right. And I — on that point, Joe, you know, we are completely at one.

You can watch Johnson and Biden's press briefing here:

Within a few hours of the Biden - Johnson press briefing, the UK’s Environment Secretary George Eustice accused the US President of not fully appreciating the situation in Northern Ireland.

Speaking with Kay Burley on Sky News in the UK, Eustice acknowledged that the US was involved in putting together the Belfast Agreement, also known as the Good Friday Agreement.

Eustice said: “What we want to help them understand is what we are proposing in terms of changes to the way the Northern Ireland Protocol works, is all about upholding the principles of the Belfast Agreement.”

Burley noted that Biden disagrees, to which Eustice responded: “I think he [Biden] is probably at the moment just reading the headlines, reading what the EU is saying, reading what Ireland might be saying, which is that they would like the Northern Ireland Protocol to work in the way the EU envisage.

"We think he is wrong because the truth is that unless we have a sustainable solution that enables trade to continue between GB and Northern Ireland, then we are going to have issues, and that itself would become a challenge to the Belfast Agreement.

“If you believe, as we do, in the hard-won peace and sustainability in Northern Ireland, have to make the Northern Ireland Protocol work on a sustainable basis, and that’s why we have to revisit some of these provisions.”

Eustice said the Northern Ireland Protocol is not a “bargaining chip” in the scope of a US-UK trade agreement, but it is “legitimate” for Biden to have a view on the matter.

“When you explain some of those provisions in detail, it is understood by the US government that that clearly does not make any sense and therefore should be revisited.”

Eustice continued: “It’s a very complicated piece of agreement, the Northern Ireland Protocol. I’m not sure he [Biden] does fully appreciate all of that. We’re obviously doing all we can to help the US government understand that.

“Principally, the Northern Ireland Protocol is an agreement between the European Union and the UK. The EU has said that they are open to engagement, discussion about how we're going to make it work."

Prime Minister Johnson refuted Eustice's claims on Wednesday: “No. The president actually in our meeting yesterday, I don’t think it came up at all.

“We had a meeting of over 90 minutes and it wasn’t raised.”

Also on Wednesday, Taoiseach Micheal Martin, who is also in New York City for meetings at the UN but is not scheduled to meet with President Biden, shot down Eustice’s assertions.

“Anybody who suggests that President Biden doesn’t get Northern Ireland or understand it is wrong. He understands it very well."

He added: "Our team in Washington have consistently used every opportunity to appraise the American administration of the importance of the UK-EU trade agreement, the role the Protocol has within that agreement, and also that the European Union is in solution mode in respect of this and wants to resolve this.

"We appreciate the fact that President Biden and his administration have been very consistent in their messaging to the UK government in terms of all working together to make sure we do not undermine the Good Friday Agreement."