Joe Biden’s first visit abroad as President was to Britain. Even before he got there he paved a way to preserve the peace in Northern Ireland. 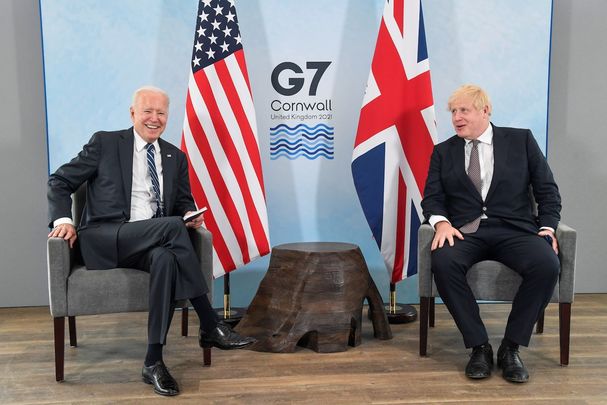 Joe Biden has done every Irish American proud by drawing a line in the sand on the Good Friday Agreement implementation and has made it clear to the British Prime Minister Boris Johnson that he cannot change, in June, what was negotiated and agreed in December on the Irish border issue.

For months we have had British bully boys racing around Europe and Ireland announcing pre-emptive changes to the Northern Ireland protocol, which safeguards the Good Friday Agreement. The latest clown car is driven by David Frost the British negotiator who has handled the incredibly sensitive negotiations with all the style of an elephant practicing ballet.

President Joe Biden brought the bullying to a complete stop during his first overseas trip to the G7 Summit, in Cornwall, making clear to chastened Boris Johnson that messing with the Good Friday Agreement and protocols was a very bad idea.

When it came to his turn to speak Johnson could not wait to move on, fully cognisant of the fact that the American bear was very much awake and growling when it came to the precious peace in Ireland.

Watching Biden it became obvious that he is personally engaged, that his lifetime interest in his Irish roots are much more than a blarney baloney act.

No American president in history has stood up for Ireland against the British like Joe Biden. It was a captivating moment to witness.

In a historic reprimand before he arrived he had his top diplomat in Britain read out a prepared text to her British counterpart. In the demarche, Biden made it ice cold clear that America would not stand for any British attempt to undermine what had been agreed so painstakingly.

In addition, he made clear that changing the border protocol would greatly complicate Britain’s efforts to sign a major trade with the US.

Biden did not stand alone. French President Emmanuel Macron was frank. When asked about British demands for aspects of the protocol to be reworked, Macron told journalists at an Elysee press conference: “I think this is not serious – to want to have another look at something in July that was finalised in December after years of discussions and work.

“We have a protocol,” he continued. “If after six months you say we cannot respect what was negotiated, then that says nothing can be respected. I believe in the weight of a treaty, I believe in taking a serious approach. Nothing is negotiable. Everything is applicable.”

The British have blundered around the Brexit breakaway for years now, taking the line of least resistance every time and trying to postpone the inevitable reality. The Northern Protocol cannot be changed.

That was Biden’s message, plain, transparent, and bluntly said. It could not have come at a more important moment.