How learning the Irish language changed my view of my identity

Maeve Flaherty discovered how learning Irish gave her a new sense of identity but not the one that most people would expect. 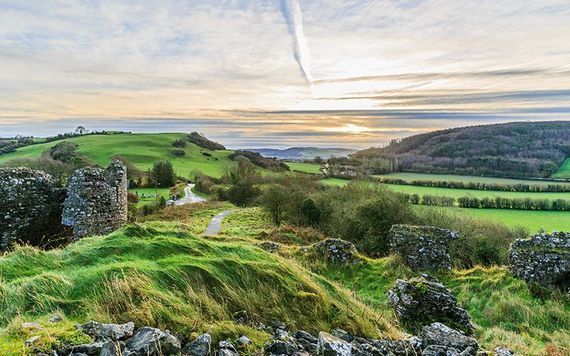 Every Thursday, I give God. I agonized over writing that sentence, the first in the college essay about studying Irish that I was convinced would determine my future.

I was applying early decision to Columbia, and the essay loomed in front of me. In the rest of the application, I was selling myself as a creative writer and language student focused on communication, so I needed to write a perfect essay.

I came back to that sentence, again and again, adding words and pulling them out.

Each Thursday, I walked from the train station to the local Gaelic-American club in Connecticut. I climbed a green-carpeted staircase lined with photos of rocky cliffs to a small library that sat tucked above a pub with a cliché Cead Mile Failte sign nailed on the fireplace. “Dia Dhuit!” I trilled as I entered. Or, literally, “God be with you.” I gave God.

The college application process requires seventeen-year-olds to decide who they are and then summarize that identity in 650 words. I wrote several versions of myself: I was the girl who had to go to therapy for two years to learn to swallow correctly; I was the girl who taught ESL twice a week; I was, quite simply, a grandchild.

The identity I eventually]settled on was Irish-American. The essay I wrote was about studying Irish.

A chance encounter with the Irish language

I stumbled into the language. I had tried Irish step-dancing, and it hadn’t stuck. My sister was a fiddler, and I ordered a wooden flute so that I could be musical, too. But by the time the hand-carved instrument arrived from Ireland, the only teacher in the area was pregnant and could not take on new students.

I grew up in a proudly Irish-American family, and I didn’t have anything particularly Irish about me. But then, at the local Irish festival during my freshman year of high school, I picked up a brochure for free Irish language classes, and that was that. My “Irishness” had arrived.

Though there were a handful of regulars in the expert level “conversation hour,” the beginners class was an intimate affair. There were only three of us, sitting around a wooden table, with my teacher at the head.

He was an Irish immigrant who worked in tech and rode motorcycles on the weekends; my only regular classmate was a woman in her fifties who worked the bar in the pub downstairs and exuded hippy energy.

Our teacher was not a professional—his primary qualification was that he had made his way through the Irish school system and the requisite language classes. His skill at actually speaking Irish did not extend to explaining the intricacies of grammar.

“No questions,” he would say, only half-joking when we asked about initial consonant mutations. But the class was free and ungraded, so any confusion was just part of the fun.

I loved it. I was also terrible. I was overwhelmed by the intense demands of school, babysitting, and my extracurriculars. I didn’t have time to study Irish conjugations when I had an AP Spanish test looming and one hundred flashcards to make.

I would walk into Irish class, plop my open textbook on the desk and work through it for an hour with the others. And then the textbook sat abandoned in my bedroom until the following Thursday dawned, and I was stuffing it in my backpack again, everything I had learned the previous week already forgotten.

I spent a week of the summer before my college applications at Irish camp in New York. At the Marist Brothers monastery on the banks of the Hudson, a group of American nuns and random enthusiasts taught Irish to a crowd that was 90% retirees.

When not in class, I hung out with my fellow young people, a crowd consisting of a thirteen-year-old, a fifteen-year-old, myself, and one poor twenty-three-year-old college student from New Jersey named Kevin who went by Caoimhín for the duration of the camp.

He liked pop-punk and his girlfriend on the outside; he didn’t love that his only friends were three very young teenage girls.

This was my Irish America—jello shots at a “ceilidh” in the dining hall that looked like an elementary school lunchroom, being swung by old men over the laminate floor under harsh fluorescent lighting.

It was a bunch of white sixty-five-year-olds stumbling over “pass the salt” at dinner, a talent show where three different people decided to play spoons, and an American monastery where I never saw a single monk.

At the time, it felt like a game to me, like dress-up. And we all needed it. “American” is an incredibly specific identity and yet predicated on the idea of a hyphen.

In a New York City year, the passage of time is marked by parade after “--American” parade. “Irish-American” is a very popular choice, with 30 million citizens claiming Irish ancestry to some degree.

My family raised me to believe I was “authentically” Irish. My mother is a citizen, we know our family in Ireland and visit somewhat regularly, and we were raised on “Irish culture.”

But it wasn’t until I visited for an extended period—two months spent backpacking around Ireland and staying with relatives—that I understood just how Irish I’m not. And, more importantly, how Irish-American I am.

I spent St. Patrick’s Day at my cousin’s rugby match and the night wandering the streets and bars of Cork with him and his friends. We are the same age, and we always have great chats, but around him, I feel viscerally, intensely, American.

I wear my national identity in my mannerisms—I am, like most Americans, more smiley than the average Irish person—but also in my way of seeing the world.

I had long known and understood that the Irish generally view the American who shows up to Ireland claiming to be Irish with something ranging from strained tolerance to quiet disdain.

In the moments when it came up with strangers, I tried, again and again, to emphasize that I wasn’t like the other Americans. That I was, if not Irish, at least genuinely respectful of my Irish heritage. I didn’t want to be seen as just another Guinness t-shirt wearing tourist.

While there, I often felt a certain shame for my American-ness. When not with family, I did not claim any Irish heritage. Better, it seemed, to be believed a WASP or Italian-American, then to be seen as another “I’m actually Irish too” retiree peering out from under a baseball cap at a random field that they mistakenly believed had belonged to their great-great-great-grandfather back in 1897.

In that sticky-floored lunchroom at the New York monastery, nobody was concerned about being authentically Irish. There were discussions of what county or town relatives or ancestors were from but no particular desire to break out and compare the genealogies.

Nobody talked about the drama between Fine Gael and Fianna Fáil; debates about Obama’s policies were the only politics on the menu. Nobody was competing to be the most Irish because they were all thoroughly Irish-American.

I sat down a month later to write the first draft of my college essay. It talked about attending class, but it also featured a few sentences about the view from Knocknarea. I wrote about feeling, standing on that mountainside, that the landscape was somehow home. And then I crossed those words out.

My family taught me to love the Irish vista—there are photographs of a family farm on our staircase, and as a child, there was often a calendar with a different Irish cliff for each month.

That Ireland is The Homeland was trained into me. But, in the end, Ireland is an objectively beautiful country where I have many happy memories—and nothing more.

My home is the Connecticut coastline, where bushy trees flirt with power lines, and on hot days the marshes smell like rotten eggs. Ireland has always existed in the Irish-American psyche as ancient. In Ireland, unlike America, you can walk among pre-historic sites, ducking your head to step under 1,000-year-old lintels; it is Ireland where you can touch history.

But I used to stand knee-deep in the Long Island Sound, putting tags on horseshoe crabs. I held living dinosaurs in my hands and then released them back into the sea.

Two years before I sat down to synthesize my identity in an essay, I watched my Irish cousins follow fireflies around my lawn. They whooped every time one lit up, an unusual moment of pure excitement in extremely composed high school boys. Like every girl who went to Sunday school and listened to tales of St. Patrick, I knew there were no snakes in Ireland.

But somehow, it had never occurred to me that there might not be fireflies. Their lights flashed, flares in the night illuminating experiences we did not share.

At dinner, I told my parents I was writing my essay about how studying Irish made me feel more Irish. But the Irish language is no longer contained within Ireland; there are programs across America and around the world. The essay I wrote, those 650 words, was indeed about studying Irish, but there was no mention of Ireland.

Learning Irish as an American experience

Spending months in Ireland didn’t make me feel more Irish. Studying the Irish language is, for me, American. I did it in America, among Americans, and for us, it was not compulsory. Irish was entirely a choice, and I studied only among enthusiasts—the experience of learning was an American one.

As I wrote that essay, I reframed my relationship to Irish not just for the reader but also for myself. Those Thursdays bent over my Irish For Beginners book didn’t bring me closer to my heritage back in Europe—they were part of my heritage here.

I checked the word count and blinked when I realized it hadn’t changed. I had forgotten, in that moment of deeply concentrated editing, that Irish-American is one complete word.

The “-American” is not secondary; the word Irish-American and the identity itself are fully contained and independent of Ireland.

I set the essay that got me into Columbia in that classroom in Connecticut and on the shores of the Hudson River. I did not write a meditation on Ireland or a call back to some ancestral connection.

I wrote about my present moment in my present place; I wrote about a living language in a New World. I set out to write about being Irish, but while writing my college essay, I found that I was something else entirely.

I am not from Ireland but from the energetic Irish-American strongholds that dot the coast between New York and Boston. Irish-America is not a shadow. It makes its own light.

Maeve Flaherty is a recent Columbia University graduate pursuing an MSc in International Relations at the London School of Economics.