The UK's new Foreign Secretary Liz Truss said "my absolute desire is to get a deal that works for the people of Northern Ireland." 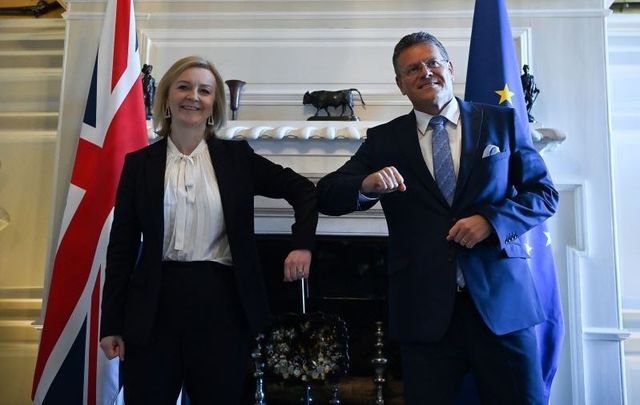 British Foreign Secretary Liz Truss expressed bright hope that there is a “deal to be done” to resolve the Northern Ireland trade dispute that has soured the U.K.’s relations with the European Union.

Truss, who recently took on Britain’s Brexit role in addition to her Foreign Office status, played down her pre-talk threat of triggering Article 16 on the Northern Ireland Protocol. That would suspend parts of the Brexit deal previously agreed between Britain and the EU.

The talks at Chevening House in Kent were aimed at improving relations between the UK and the EU which had been severely damaged under Truss’s Brexit predecessor Lord David Frost who frequently clashed antagonistically with his opposing numbers in Brussels.

The path to a calmer atmosphere may have been smoothed over dinner of Scottish smoked salmon, Welsh lamb, and Kent apple pie. There was no Ulster fry.

Truss and Šefčovič plan to have a further meeting next Monday following intense talks this week between top civil servants.

She said, “We have had constructive talks with the EU. We are now going to go into intensive negotiations to work towards a negotiated solution to sort out these very real issues for the people of Northern Ireland.”

Truss, a candidate for leadership of the Tory Party if Boris Johnson fails to survive growing current threats to his premiership, added, “Clearly if we don’t make sufficient progress we will have to look at the alternatives, but my absolute desire is to get a deal that works for the people of Northern Ireland.”

Ireland’s Foreign Affairs Minister Simon Coveney welcomed the improved mood music around the talks. He said, “I think it is a good thing that the Brexit issues and the Protocol issues are back in the Foreign Office in London rather than in a separate unit led by Lord Frost.”

Major differences remain between the sides over the future implementation of the Protocol, which keeps Northern Ireland in the EU’s single market for goods and draws a customs border down the Irish Sea.

The EU has offered to cut in half the number of customs checks and reduce health and safety checks on meat, plant, and dairy products by 80 percent.

The U.K. is insistent that the plans proposed do not yet live up to that promise and is pushing for a more radical overhaul that would ensure there are no checks on goods from Great Britain destined to stay in Northern Ireland.